For many reasons, I was awarded the “Born in the Wrong Decade” superlative for the Lanesville Junior-Senior High School class of 2009.

This was most likely due to the fact that just about every day at school I would sport a Pink Floyd, Led Zeppelin, Steve Miller Band or another of my favorite bands’ T-shirts, constantly sing songs, play air guitar or air drums and blare the good tunes in my car when I left the school parking lot. 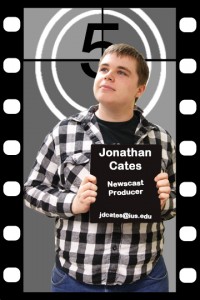 I mostly listen to rock, but I can certainly dig country, pop, funk and even rap on occasion, as long as it was made before or near the time of Feb. 27, 1991.

Apparently Bob Seger felt the same way when he sang, “Today’s music ain’t got the same soul. I like that old time rock ’n’ roll.”

I can barely stand to listen to today’s hit songs on the radio because they almost drive me insane.

I used to wonder why I disliked today’s music so much, but then I figured it out: today’s mainstream music lacks effort.

I could be wrong, but it seems to me that most artists today do not even care about the quality of the music they put out there.

It is like the only effort put into making music is finding a good beat so people can bump-and-grind to it.

Sure, I love to dance as much as anyone — in fact, I am still undefeated in dance-offs — but when I want to listen to a song, I do not want to listen to one that repeats the words “booty wurk” 42 times in less than four minutes.

I cannot sit here and say that the lyrics of most ’80s songs were of the highest quality, but the music behind them made up for it.

You could feel the passion, effort and a love for music. That might be one reason why today’s music lacks effort.

No one even uses any actual instruments anymore.

In “Nothin’ But A Good Time,” Bret Michaels of Poison sang, “I raise a toast to all of us who are breakin’ our backs every day.”

Do you know why he said that?

It was because back then, bands worked hard to get to the point where they were.

They played in bars and clubs with hardly anyone there until, finally, they were discovered.

Now, artists like Skrillex can press play on their laptops and make millions of dollars, while the guys who still have the rock-star dream can barely pay rent.

Modern technology has given us great things and great opportunities, but I feel as if it has ruined good music.

With the emergence of Auto-Tune, anyone can be a music superstar without having any actual singing talent.

Technology has even given birth to the worst genre of music, dubstep.

Dubstep to me sounds like Optimus Prime continuously transforming into a semi-truck. If I wanted to hear the entire Autobots colony transforming for three minutes, I might as well just pop the Transformers series into the DVD player.

There is a reason why bands from the classic-rock era can still sell out arenas 30 – 40 years after their prime, and artists who were relevant five years ago are lucky to get a gig at a small club.

There is a reason why those bands are considered “classic” and why their music will live beyond their time on this earth.

This is because they cared about the quality of the music they put out. They wanted their listeners to feel as good about the song as they did when they wrote it. They had passion.

But then again, it could have been the drugs.