The man behind Hamlet

If you have been around the IU Southeast Theater Department, you probably know Mitch Donahue, communications-theater junior. 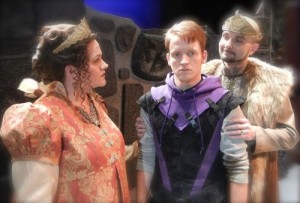 Donahue will be the lead role in the theater department’s upcoming production of “Hamlet.”

Donahue began his theater career as a freshman in high school, and has excelled ever since then.

“Before that I did nothing but sports, and it wasn’t until I switched over from football and wrestling and started marching band and theater,” Donahue said. “I would get very bad ADD playing football, and I would focus more on the marching band. I was bored again, and needed something to do, and my girlfriend at the time was in theater, so I was like, ‘hey, why not’?”

After playing the lead in four IU Southeast plays, Donahue is well respected among his peers.

Gabriel Vanover, communications-theater senior, plays Palonious in “Hamlet” and this is his third play with Donahue.

“Mitch is really easy to play off, and easy to bounce things off of,” Vanover said.

Jesse Brown, Masters of liberal studies, plays the dead king and priest in “Hamlet” and another actor who has a past with Donahue.

“Mitch is very reliable of a scene partner,” Brown said. “This is our fourth show together, and I always know I can rely on him. He’s somebody easy to work with and work off of, and I always know if I screw up a line he’s going to save me.”

Donahue said before shows, he and the rest of the cast will sit in the dressing room and sing random show tunes before a play.

“Before I go on stage, I have this weird habit of touching every single part of my costume to make sure it’s on me,” Donahue said.

He said he does this because he thinks there’s the possibility he has something, and then he realizes he does not mid-stage.

Donahue said when he graduates he wants to get a job in a theater somewhere.

“I will go anywhere and do anything,” Donahue said regarding future plans.

Jim Hesselman, assistant professor of theater, has directed Donahue several times and has been at IU Southeast for several years.

“I directed Mitch in ‘The Fantasticks,’ ‘Waiting for Godot’ and ‘Urinetown’ at IUS, and I hired him to play his first professional role in ‘Leagally Blonde’ at Circa ’21 Dinner Playhouse in Rock Island, Ill., last summer,” Hesselman said. “He has done a great job for me in every project.”

Hesselman said Donahue’s strengths as an actor are his creativity and imagination.

“I think these allow him to never be afraid to try all the possibilities he can during rehearsals,” Hesselman said. “It also makes it fun for him and his fellow actors. I found on ‘Legally Blonde’ that I could also count on him to always be prepared and have his work done before he came to rehearsals and he fit right into a professional setting.”

Hesselman said he is confident Donahue has a bright future ahead of him.
“He is a very creative, responsible, hard-working student and I’ve noticed him to be a thoughtful, caring and trusted friend to the people he works with,” Hesselman said. “Mitch has many interests, from acting to technical theatre to graphic novels and cartoons. I think he will carve out a career for himself that might involve all these things at one point or another.”

“I’ve seen him in rehearsal, so I already know that he is taking on one of the most difficult roles in the English language, making it his own and doing Shakespeare proud,” Hesselman said.