Federal blood donation policy on gay and bisexual men is discriminatory
I have O negative blood, I am young, and I am healthy. 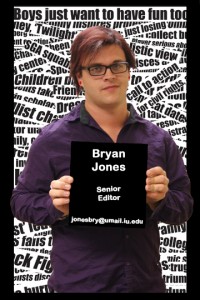 That is precisely what The Red Cross and other blood collecting agencies want from potential donors, and with the blood shortage throughout the country, it could be used, I am sure.

However, because of a policy enacted by the Food and Drug Administration years ago, I am not allowed, because I have sex with men.

I was not even allowed to donate something to my own father to give him the good bacteria his body was destroying, because I participate in MSM (Men participating in Sexual acts with other Men).

Even if one of my friends needs a kidney, I cannot donate, unless I lie, to save their life. I have been tested for HIV, and I am negative for the disease. I can show paper work to prove it as well.

The FDA is shunning thousands of people from being able to donate blood because of this discriminative policy.

Even if I had been with the same person for years, and I had been determined HIV negative, I still would not be allowed to donate because homosexual sex carries far too high of a risk.

According to the FDA, the policy was enacted because in the ‘80s there was an epidemic of the HIV/AIDS virus throughout the country. A lot of tainted blood was received, transmitting the virus to people who received it.

A potential male donor will be asked if they have had any kind of sex with a man and if they answer ‘yes,’ they will be taken off the donor list for life, unless the FDA were to repeal the law.

There are about 1.2 million people living in the U.S. with the virus, and approximately 49 percent of them are homosexual or bisexual men — this is the reason behind the FDA’s policy, but let’s not forget about the rest of the population.

For heterosexual men, it is possible to donate blood after having sex with thousands of partners, as long as every single person on that list is female.

Based on their sexual orientation, a good chunk of healthy people get excluded from donating blood due to a risk that can be prevented before it happens by the individual, and by the blood collecting organization.

Let’s not forget about the bi-curious crowd; I have met a few that were willing  to experiment with another guy, but would be devastated if it was found out by someone other than the parties it was happening with.

Let us pretend a bi-curious guy goes into a donation center and claims he has never had any sexual relation with a man. In reality, he had one with someone 20 minutes prior, but because he was ashamed of it or does not recognize himself as a bisexual or homosexual, he lied and therefore passed the rest of the questionnaire.

Let’s also pretend he contracted HIV from someone right before he walked in; it would not be detected because it takes a few days, and he could taint the blood supply.

These guys exist; I used to be one. I donated blood my senior year in high school. I was not out at that point in my life, but I have had sexual relations with another male.

I do not have the disease now, nor did I have it then, but I’m not the only person who ever lied on their little survey.

While the gay community does make up for nearly half of the infections, excluding anyone from donating and saving people’s lives is wrong. Doctors can now test for HIV within days of contracting it and all blood is tested before it is administered to any patient.

The policy is simply discriminatory. Those who back the policy say that in order to keep the blood supply safe, we have to continue to ban homosexuals from donating. However, with the ability to detect diseases in blood now and the education available about HIV/AIDS and ways to prevent contracting it, it is less likely that contaminated blood can get into the supply.

The solution to the problem is simple; treat us like heterosexuals are treated. If we are too sexually active with too many people, put us on a deferral program. If we meet the requirements after that, then we are allowed to be donors again.

Do not tell gay couples they cannot donate because of what happens between the two of them in their bedroom when they have been with each other exclusively for 30 years – just take their blood and say “thank you.”

Keeping homosexuals from donating because we are in a higher risk group is like saying only gay people have and get HIV from having sex, and it is not right. It is discrimination in the law and aren’t we the land of the free?

Growing up I heard people who donate blood are heroes, and I want to be a hero.