Recently, the man of my dreams celebrated his 70th birthday — George Harrison

I’ve been a fan of the Beatles for as long as I can remember, and I’ve become what most call a “beatlenut.” I know everything there is to know about the band, and the individuals who formed it. 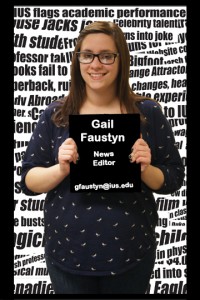 I know useless facts that will not ever help me in any situation, except if I were to randomly star on a “Jeopardy” one day.

With my disturbing obsession, I’ve studied The Beatles music on my own accord for hours at a time and talked about it with my peers, with which I’ve formed strong opinions on them.

When talking with others about the band the one question that always pops up is “Who’s your favorite Beatle?”

Nearly everyone I’ve talked to will say John or Paul and it absolutely irritates me.

Do not get me wrong, I love Paul and John, both we’re excellent song writers, and Paul’s voice is still making girls swoon — but they have got nothing on my man George.

George often just gets left out, forgotten about and occasionally people can’t even remember his name.

“John, Paul, Ringo… Isn’t there another one?”

During the documentary, there is an interview with Paul Mccartney, where even he said that The Beatles wouldn’t have been what they became with out George.

Paul describes the process of recording the song “And I Love Her” one of The Beatles most famous songs from their early records.

Paul had just finished writing the lyrics with John and entered the studio. He then sang the song to George.

Immediately, right off the top of his head George added that famous riff that made the entire song, without ever practicing it.

Just take a second and Google that song. Try to imagine it without that haunting four-second riff – it’s nearly impossible.

George was only 16 when he first joined The Beatles, Paul says throughout his interview that even though he was young he was still doing what people three times his age were not capable of.

“I think a lot of his solos were very distinctive and made the records. He didn’t sound like any other guitarist. The very early days we were really just kids and we didn’t think at all professionally. We were just kids being led through this amazing wonderland of the music business. We didn’t know how it went at all – a fact that I’m kind of glad of ‘cuz I think it meant that we made it up.” Paul said.

I think what I appreciate most about George is that he did things not for the intention of selling records, but to produce something he loved and could be proud of.

For instance, George went to India for a while to study Buddhism and get away from the whole “celebrity” scene.

From just the short time he spent their studying he was able to instantly pick up the sitar, which is probably one of the hardest instruments to play. He also wrote some of the best songs that tend to get overlooked.

“Long Long Long” which is one of my absolute favorite was a bi-product of his studying, as well as “Blue Jay Way,” which don’t sound like typical Beatles songs, however there is so many beautiful musical things going.

George somehow infiltrates classical music, Indian and blues all into one and the outcome is what I like to call “eargasmic”

Even his lyrics are incomparable. To me George’s “Within You and Without You” is not even on the same level as the Lennon-Mccartney “When I’m Sixty Four.”

Both of those tracks were put on the same album [Sargent Pepper’s Lonely Hearts Club Band] but sounds like they come from entirely different parts of the globe.

I do love the catchy melody of “Will you still need me, will you still feel me when I’m sixty four” but honestly the idea behind the song and the main message that “life flows on within you and without you,” is just so beautiful and timeless, but sadly it isn’t catchy and that’s what people tend to like.

To do this date,  “Something” and “ Here Comes The Sun” are the top covered Beatles songs, both written by George. I do not want to sway you on your opinion of The Beatles, and who your favorite one is — that’s all a very personal thing.

I just want him to be remembered, and to be talked about because with out him there would be no Beatles.

He had a name and it was George Harrison— and he was the one who wrote those guitar riffs that you couldn’t stop singing.