When it comes to plastic, change must be drastic

Remember when we had this option while shopping? It is rarely available nowadays.

Instead, the option is replaced with silence, and our items are automatically placed into plastic bags. This has become the norm, a habit. 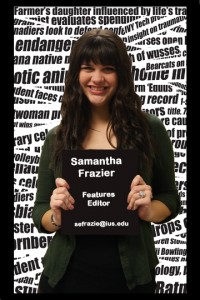 And I think it’s time we kicked this habit.

Plastic bags — and other plastic products for that matter — are not only bad for the environment but also for animals and human health.

Plastic bags are so detrimental, in fact, that numerous places worldwide— even entire countries in some cases— have made laws banning or restricting their use.

Many cities within the United States have done so, and it’s not just environmentally minded cities like San Francisco and Boulder, Colo. Even cities in Texas, a state known for its oil rigs, have enacted plastic bag bans, according to The New York Times.

You may be wondering why I think we should do this. You may wonder what the big deal is.

That’s totally understandable. Most people just use plastic bags because it’s the norm but don’t know much about them.

In fact, it wasn’t until I worked as a cashier at a retail store that I realized just how big this problem is. I noticed the ridiculous quantity of plastic bags being used and the absurdity of their use — does one really need a large plastic bag to carry one spool of thread?

I began to research, and what I found was disturbing.

One of my modes of research was a documentary film entitled “Bag it!” Most of the information below is taken from that film unless otherwise noted.

Warning: You may be surprised to find that there’s more to plastic bag bans than what some people would call “tree-hugging hippie politics.”

First off, Americans alone use 100 billion plastic bags each year. That means 60,000 plastic bags are used every five seconds in the United States.

And what are these plastic bags made out of? Oil, —yes, the same oil you put into your car— fossil fuels and nonrenewable resources, emphasis on the word “nonrenewable.”

In fact, in order to produce that many plastic bags in one year, 12 billion barrels of oil are used.

It takes 7 million years to make oil, so doesn’t it seem silly to use it to create something that we use for only a few minutes?

Additionally, plastic bags last forever. Landfills are only covered by rock over time. That means if future archeologists dig into the ground they will find plastic bags and other trash. Is that really what we want to leave behind?

Transporting trash such as plastic bags to landfills —and to be dumped in the ocean — also requires fuel and pollutes the air.

I know we’ve all seen plastic bags everywhere in the environment: trees, sewage openings, fields, etc. Their light weight causes them to easily fly everywhere, littering the earth and becoming an indigestible, and often fatal, food for animals.

Plastic bags are especially lethal to marine animals. As mentioned, plastic bags are often dumped in the ocean. A popular dumping spot located in the Pacific Ocean has even come to be known as the Great Pacific Garbage Patch.

Dumping trash there has become extremely harmful for marine species.

Plastic bags are specifically lethal because they resemble jellyfish. Therefore, animals that prey on jellyfish confuse them for food and eat them. They can also strangle animals such as sea turtles.

Otherwise, the sun causes the bags to disintegrate, but never fully evaporate. This leaves behind plastic debris, or tiny pieces of plastic.

The plastic debris are of concern because fish eat them, and this ultimately kills them.
These plastic pieces are so prevalent in the ocean that they outnumber plankton 40 to 1 and kill more than 100,000 marine animals each year.

You may be thinking: Well, if that’s true then why should Kentucky or Indiana, two states nowhere near oceans, pass bans on plastic bags? And why should we care about plastic bags if they’re affecting marine animals, not humans?

Plastic bag usage affects humans, even those who don’t live near oceans. Plastic is actually very detrimental to human health.

You know those fish that are eating plastic? Well, humans eat those fish. Most likely when you are eating fish, you are also eating the plastic pollutants that they ate.

“When fish and other animals mistake the plastic as food, and they frequently do, the toxic chemicals work their way up the food chain. This is not only potentially devastating to fish and wildlife, but to human health too,” said the Surfrider Foundation, a non-profit environmental organization.

The toxic chemicals they speak of are BPA and phthalates.

BPA, or bisphenol A, is a chemical commonly used in plastic products that has been found to be toxic. Studies have shown links between the chemical to breast and prostate cancer, early-onset puberty and polycystic ovary syndrome, according to the New Yorker.

Phthalates are listed as one of the chemicals linked to breast cancer on breastcancerfund.org, and the site explains that it can readily enter the body through the skin. Therefore, just carrying a plastic bag can be harmful to humans.

Studies have found low levels of phthalates to cause infertility, lower sperm count and smaller penis size as well, according to bagitmovie.com.

Overall, “BPA and phthalates have been proven to be toxic, endocrine-disrupting, hormone level-changing, and disease-causing chemicals,” according to the same website.

It is obvious why plastic bags should be banned. Most importantly, banning them does work.

The entire country of China banned ultra-thin plastic bags in 2008, a move that has saved 1.6 million barrels of oil and reduced plastic bag usage by 66 percent, according to the Huffington Post.
Ireland placed a fee on plastic bags and reduced their consumption by 90 percent in its first year.

The city of Fort Stockton, Texas, banned plastic bags because they were getting stuck in barbed wire and cactuses, according to the New York Times. Since the ban, the article explained, residents have grown accustomed to using their own reusable bags and the litter situation has improved, said city council member Darren Hodges.

I think that for Louisville particularly, enacting a paper bag ban would be very beneficial. Louisville is an up-and-coming city. It works hard to prove it is progressive and following this trend would do just that.

Of course, some argue that a ban is inconvenient. Sure, it will take some getting used to, but that’s only because we aren’t used to it.

As time goes on, we will grow accustomed to the change, and it will become a habit.

And that would be a habit worth keeping.

For more information on bans and how to rally for one in your hometown, visit bagitmovie.com.

In the meantime, be sure to cut back on your use of plastic, including shopping bags, bottles and other products. Remember, every movement begins with individual efforts.