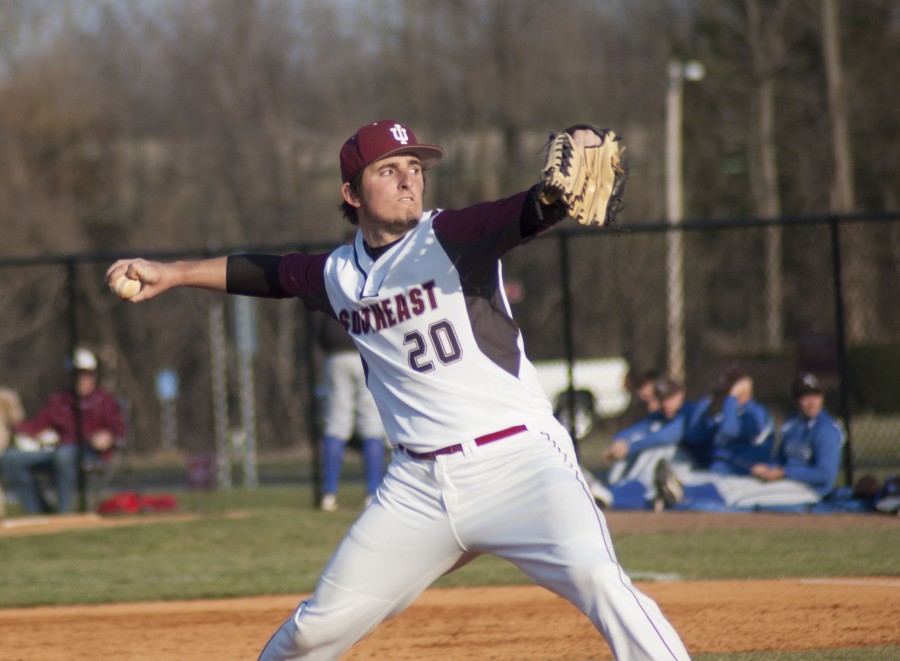 The baseball season may be in its final weeks, but the Grenadiers still have plenty of steam left.

The team had a strong weekend April 5-7, blazing the competition in five of the six games played.

The team won three of their four games against the Alice Lloyd Eagles, and was undefeated against the Saint Francis Cougars.

These victories helped offset the rocky start the Grenadiers had in April, as they lost to the Lindsey Wilson Blue Raiders and St. Catharine Patriots earlier that week.

In addition, as IU Southeast prepares to host its first ever conference championship, these victories are a sign of good things to come.

Against Alice Lloyd, the Grenadiers won two of the games without letting the Eagles earn a single run.

In the second match on the 5th, the Grenadiers defeated the Eagles by a healthy 10-4 margin. Their results against Saint Francis on the April 7 were similar, with the final scores of the two games being 20-9 and 17-4, both victories for the Grenadiers.

“It was nice to sweep the day,” Reel said, referring to the games on April 5. “We had excellent defense.”

“They pretty much got it done all weekend long,” Reel said. “They had multi-hits and big RBIs.”

Louis Helmburg, junior catcher and right-handed pitcher for the Grenadiers, said he also considered Pluskota to be vital.

Reel said Elliott Fuller, senior right-handed pitcher, impressed him with his resilience on the field.

“He got hit by a line drive and was throwing up all day because of the flu, but he was still out there pitching,” Reel said. “We were like, ‘Wow, this kid is tough. He really wants it.’”

Helmburg said he was excited about how the weekend games turned out.

“We came out ready to hit and play defense,” Helmburg said. “Everybody was in it from the first inning on.”

Helmburg said he is optimistic about the rest of the season, and is excited to see more of the team’s potential show in the field.

“People haven’t seen the true IUS baseball team yet, and when they do, we will be unbeatable,” Helmburg said. “I believe that from the bottom of my heart.”

Looking to the remaining weeks of the season, Reel said he is hoping to see further growth within the team.

“What I’m looking forward to seeing is if our guys are going to fix the things they’re struggling with, and take a step forward as a team,” Reel said. “I want to see them achieve any goals they have individually and any goals they have as a team. That’s why I do this job.”

The Grenadiers will be playing two double headers in Pennsylvania on April 13 and 14. Reel said these games are particularly important.

“If we win these games, we win the conference,” Reel said. “We just have to go out there and execute our plans.”

After the team returns from Pennsylvania, the Grenadiers have four games left in the season before the conference championship.

The Grenadiers head to Lindsey Wilson College on April 16 with another game on the 17th against Shawnee State University.

A rescheduled game from April 15 against Miami University-Hamilton —outside of Cincinnati — is being played at home on April 21.

The Grenadiers’ final regular game of the season will be played on April 22 against the Tigers of Georgetown College.

After those games conclude, IU Southeast will be hosting the KIAC Tournament conference championship, set to begin on the 25th.