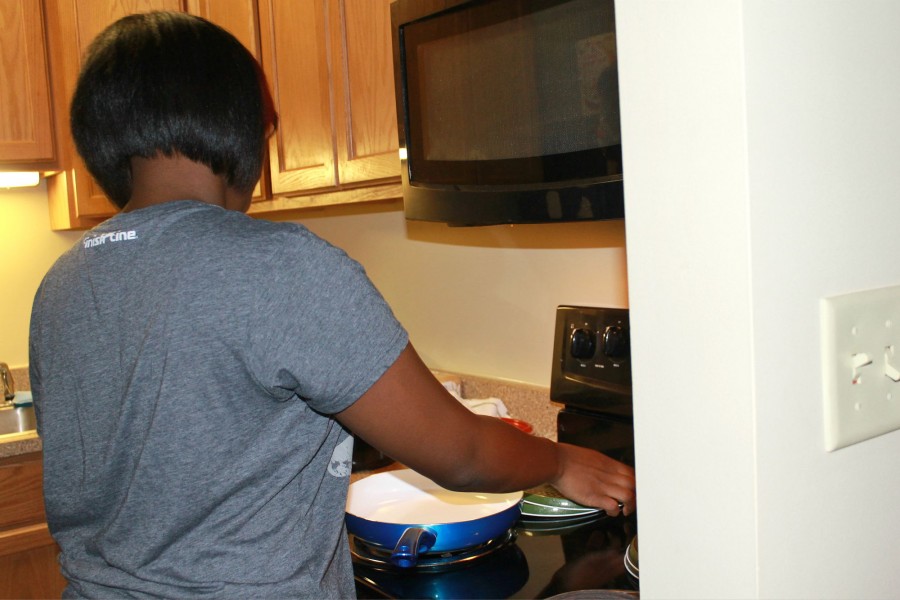 The IU Southeast on campus housing is what many students will call home while they are working on their degree. While the small dorm may not be quite the same as home, students have begun to adjust well to their new surroundings.

Kaelin Reed is one of 263 residents in the IUS lodges this semester and has embraced the change of scenery.

“I wanted to experience campus life,” Reed said. Reed is a resident of Meadow lodge.

While the living tight may be cramped, Reed finds it to be quite enjoyable.

“I enjoy having more freedom here than I do at home,” Reed said. “It is easy to get sidetracked though while doing school work since there are so many other things I could do.”

There are five different lodges on campus, each with a unique name –– Meadow, Forest, Woodland, Grove and Orchard all have apartment style living accommodations. They IUS lodges are equipped with a kitchen, a living area, bathrooms as well as personal bedrooms. High-speed Internet and cable television are provided in every room.

Each apartment also comes furnished with beds, couches, dressers, chairs, and tables. Laundry rooms and vending machines are located in each lodge, as well as computer labs and printing stations.

Joseph Hancock, political science sophomore, used to commute to campus last year, but made the transition from living at home to living in the lodges this semester.

“I decided to live on campus because I wanted to be more involved with activities on campus.” said Hancock.  “It was too much trouble for me to have to travel about an hour to school just to get to those as well as classes.”

Although Hancock is new to on campus living, he has already noticed a difference from when he lived at home.

“The biggest difference is definitely more independence compared to living at home.” Hancock said. “Sure there are still rules to live by on campus, but you are on your own time and management at the dorms.”

Amanda Stonecipher, director of residence life and housing, said the biggest issues for new residents are rooted in the adjustments of independent living such as cooking, laundry, and building relationships.

“There’s always the negotiation of roommates,”Stomecipher said. “Some of our students have never lived with anyone before and some are very used to living with others. It’s always a compromise and I call it a dance. It’s like where’s your dance space, where’s mine, and where do we meet in the middle.”

Steps that residents can take to resolve roommate issues involve roommate agreement forms, a meeting of the roommates with their community adviser, and ultimately working out an agreement within the apartment.

“The purpose of the roommate agreement is to make sure that everybody feels like they have a voice in their apartment,” Stonecipher said. “Some things are not a problem, until they become a problem. We want residents to be able to vocalize what their needs are.”

While homesickness does happen to new residents, Reed feels confident in her decision to live on campus. Reed said her parents were okay with her moving onto campus and away from home. “They miss me, but they also wanted me to have the experience of living on campus. My mom told me that you never learn anything until you try.”