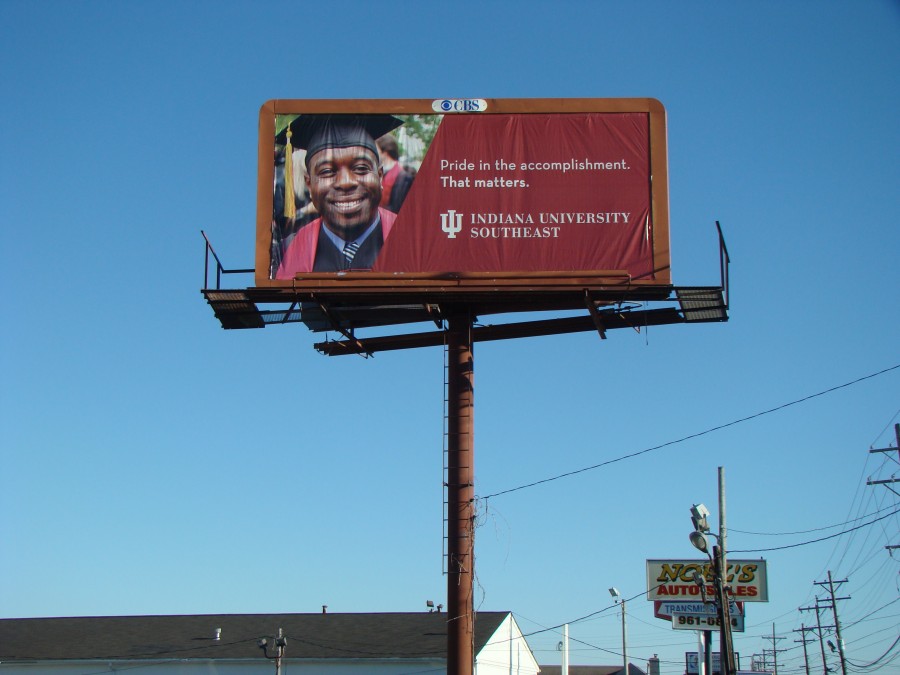 An advertisement for IU Southeast on display at Oxmoor Mall in Louisville. Jenny Johnson-Wolf, director of university communications, said the marketing has targeted both the Kentucky and Indiana sides of the Ohio River.

On Interstate 64, between the downtown Louisville cityscape and the Sherman Minton Bridge, a billboard for IU Southeast towers above the highway. It is one of several, with the others scattered everywhere from downtown Louisville to a stretch of road near the airport. All of them are adorned with the familiar crimson and cream colors the school is known for.

This is only one of several ways IU Southeast has advertised for the 2013-14 school year. Radio stations have been broadcasting the campaign’s mantras. Several movie theaters in the area have had posters in the lobby and commercials on the screens. Even bus shelters have sported the ads.

Indeed, the ad campaign for the academic year has been in full swing. And Jenny Johnson-Wolf, director of university communications, says the results have been satisfying.

“We’ve been hearing about much more visibility this year,” Johnson-Wolf said.

Johnson-Wolf said the cornerstone of the campaign has been a sharp, down-to-earth focus on students. The primary mantra has been “You matter here,” and the photos used were not staged in a studio: instead, they are of students from the most recent graduation ceremony.

“I love the message we’re getting across this year,” Johnson-Wolf said. “For me, that’s probably the most exciting thing. We’re focusing on students and their accomplishments.”

For the outdoor advertising, Johnson-Wolf said the marketing team has attempted to be “very thoughtful and strategic.” Both sides of the Ohio River have been targeted, and downtown Louisville in particular has been an important location for the advertisements.

“We have a couple of billboards downtown this year, which we’re using to target young professionals,” Johnson-Wolf said. “That is a major demographic there.”

The marketing has also targeted high school students planning to begin their college careers in the near future.

“We’ve been advertising in the bus shelters outside high schools, and target the schools by GPA,” Johnson-Wolf said. “We also get a lot of feedback from students coming in, in order to see what they’re looking for in our advertising.”

Johnson-Wolf said the outdoor advertising has been the most expensive part of the campaign, with billboards running approximately $3,000 a month. Because of this, she said strategic ad placement has been crucial. Carol Branson, marketing specialist, helped organize the strategy.

“I want to make sure that the chosen billboards are placed in spots that are easy to read,” Branson said. “Illuminated, no trees blocking the way, et cetera.”

Branson said she finds the work satisfying, and is happy with this year’s campaign.

“There is a definite sense of accomplishment and pride when you drive down the road and see your work on display,” Branson said. “I believe that it is one of our strongest campaigns both in placement and design.”

Johnson-Wolf said Branson’s work has been a vital part of the campaign.

“She drives around and researches maps of billboards to pick the ones with the most visibility,” Johnson-Wolf said. “She does a very good job with it. The board on I-64 is a very coveted board, so we were lucky to get it.”

“I mostly noticed the billboards along the interstate,” Taylor said. “They sort of influenced my decision to come here.”

Johnson-Wolf said the school has done more advertising via social media as of late.

“It is definitely the cheapest option, and we’ve been using it more than we have in the past,” Johnson-Wolf said. “We use it to promote open houses, and we also wanted to reach out to veterans in particular this year. We made posts about Jack Howell’s veterans support and benefits.”

The campaign is also mindful of students looking to transfer, Johnson-Wolf said.

“Some of our boards are placed by University of Louisville, so that their students looking to transfer know we’re a good place for them,” Johnson-Wolf said.

However, Johnson-Wolf said that the major push to appeal to transfer students has not started just yet.

“We usually start around Thanksgiving, when students come home for the holidays,” Johnson-Wolf said. “The movie theaters fit into our Thanksgiving strategy. It’s a big time for movies, so we capitalize on that.”

Ultimately, Johnson-Wolf believes the ad campaign boils down to the whole, rather than the sum of its parts.

“We try to figure out how broadly we can spread our advertising while still staying strategic,” Johnson-Wolf said. “Ad campaigns are about getting everything to work together. It’s the power of the entire campaign that’s helped you understand a little more about IU Southeast.”