Oppression is something that America has gotten quite good at. While we may be the good ole “land of the free” we are also the land of the selective. You are free to be who you want in this country, so long as you understand the repercussions that will follow. 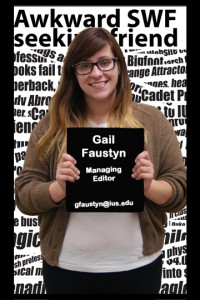 For centuries America has quietly dealt with civil rights issues from slavery, women’s suffrage. Slowly but surely people understood that it was wrong to belittle people for the color of their skin. Now they have moved on to their sexual orientation.

While this shouldn’t even be anyone else’s business or a factor in politics, people have made it that way and, begrudgingly, I will accept that for what it is. However, what I can’t even begin to tolerate is how gay students are being treated within the middle and high school systems.

I went to high school in a small, conservative, homogeneous town. With my inability to keep my mouth shut, it was difficult to fit in there.

The town itself is beautiful. It sits right off the St. Clair River, people sit and watch the boats go by during the day, and at night couples sit and swoon and watch them as they roll out. There are churches on nearly every corner and parks on every fourth block—needless to say, it’s very picturesque.

With the town being near to perfect the people within it fear change. They dread it so much, in fact, that when a group of students tried to start a Gay-Straight Alliance within the high school, St. Clair reared its ugly head.
People can be ruthless or violent nearly anywhere you go. Once people are accustomed to a certain way of life it’s hard for them to think a different way; after all, it’s all that they know. The startup process to simply get the group going was the worst. The group dug and buried themselves amongst mounds and piles of paperwork and jargon.

Once everything was together we thought we stood a fighting chance to become an official school-affiliated group. There were a myriad of religious groups, and if they had a right to be on school grounds so did the GSA.
Apparently not.

It will be hard for me to ever forget what my high school principal said to me when we turned our request in to him. It went a little something like this:

“You’re being a bit overzealous right now. You just need to calm down and things will work out.”

I wasn’t entirely sure what I was supposed to leave with after that conversation, but I knew he was trying to maintain his squeaky-clean reputation as principal and everyone’s friend. Princi-PAL.

After a while, and I do mean awhile, the school finally allowed the group to meet on school grounds, though we weren’t technically affiliated. Once we accomplished that, we moved on to bigger things: we wanted to march in the school’s homecoming parade.

While I thought trying to start the group was bad, trying to march topped that. I cried every day during that process and felt so terrible from the things I saw happening around me.

My friend got “queer” etched into his locker. Members of the group received anonymous letters from members of the community advising them that they shouldn’t march, for it could mean expulsion. Despite everything, the group marched. And to this day it is one of the most moving things I have ever been involved in.

I can’t even begin to understand why some students and parents felt it was OK to behave in such a righteous way. They had to see that what they said and the actions they took hurt students, young high-school aged kids, who wanted nothing more than to be accepted by their community.

They were outcasted, shoved aside and told to simply “go calm down,” and that what they were doing was condemnable behavior.

Children should not have to feel scared to go to school. They shouldn’t be belittled by their principal or threatened by a parent. Hate is a learned behavior, and if we don’t stop expressing it now, when will we?