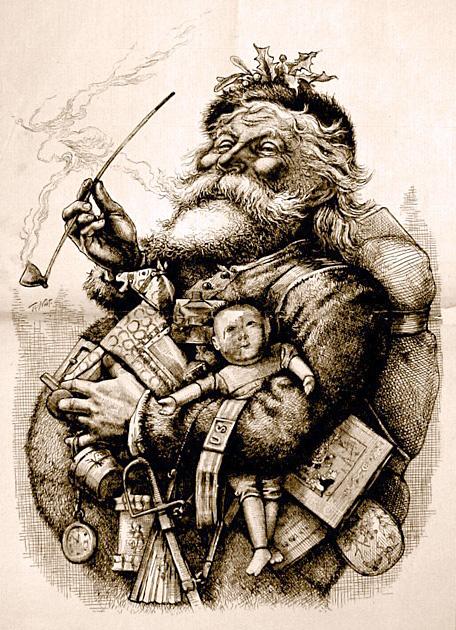 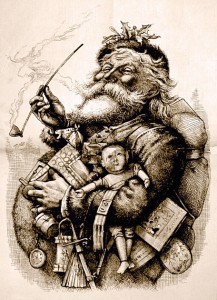 In America it is said that a fictitious man rides a reindeer-powered sleigh, squeezes through chimneys, eats millions of cookies and drinks tons of glasses of milk all so he can bring presents to the good children of the world on Christmas Eve, Dec. 24.

This fabled, traditional character is known to most of the United States as Santa Claus. Described as a stout, white-bearded, merry man, Santa Claus is also known as Kris Kringle, Saint Nicholas.

However, there are many different forms of “Santa Claus” with various origins and stories from around the world.

Djeda Mraz, which translates to “Grandfather Frost,” is a make-believe character in Slavic cultures comparable to Santa Claus. Emina Toric, general studies and psychology junior, who is also originally from Bosnia, said that Bosnia is predominantly Muslim territory with Catholics and Christians and that when they celebrated Christmas the Muslim children would feel left out so the parents incorporated Santa as a New Years event.

“So to Bosnians Santa comes on New Years bearing gifts to family members and kids who are good all year,” Toric said. “They take the religious aspect out of it.”

Santa Clause in France and other French-speaking countries is Père Noël, having the same general nature as Santa Claus in the U.S.- the bringer of gifts.

The history of Père Noël is linked to the life of Saint Nicolas- a fourth century saint and Greek Bishop that had a reputation for secret gift-giving and thus became the model for Santa Claus. Charles Pooser, associate professor of French, said traditionally, francophone children from different French-speaking countries and areas leave their shoes by the fireplace or Christmas tree with gifts of food and drink for Père Noël.

“Apparently in some French areas, Père Noël is accompanied by a donkey which carries the gifts on its back, for which children might also leave food (carrots or hay),” Pooser said. “Legend has it that the real Saint Nicolas traveled on the back of a donkey as well. Small gifts are left in place of the food in the shoes or beside them for the children to find on Christmas day.”

Germany is home to many different Santa’s and Santa traditions.

“The most prominent tradition is an angel, called Christkind, meaning Christ-child, brings the presents to good children on Christmas. Ill-behaved children in some regions of Germany are subject to visits from Krampus, a bad Santa,” Michael Hutchins, assistant professor of German, said.

Krampus is said to be a beast-like creature from the folklore of Alpine countries, which during the Yuletide season punishes children who have misbehaved.

Hutchins also said Saint Nikolaus, whose feast day is on Dec. 6, is also a common gift-giving festivity in Germany. During the first week of December, particularly on the evening of Dec. 5 (the eve of Saint Nicholas day), young men dress up as Krampus and roam the streets frightening children with rusty chains and bells.

The Philippines recognizes the same figure for Santa Claus as the United States, however, the kids know early on that the presents they receive are from their parents.

“We start celebrating Christmas day on Christmas Eve. Family members and extended families would gather and share a dinner at the stroke of midnight, which we call Noche Buena and that is when we open our presents,” Milallos said. “We welcome Christmas with fireworks and lavish feasts.”

Across the globe there are a variety of Santa Claus figures and seasonal customs, none being neither right nor wrong.