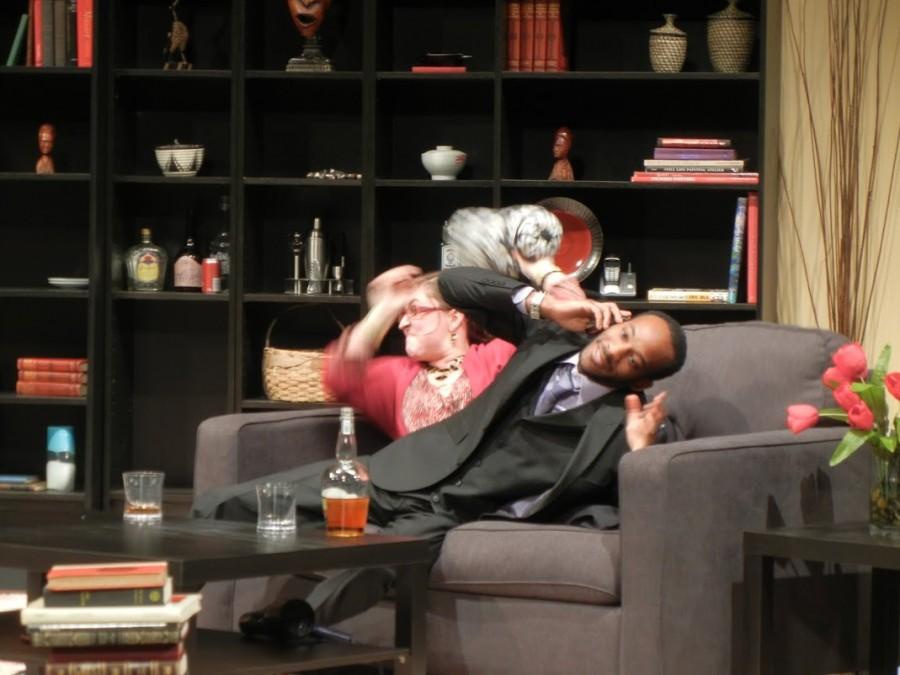 Jim Hesselman, director of “God of Carnage” and assistant professor of theatre and performance at Indiana University Southeast, introduces the performance with a thought-provoking anecdote within the first couple pages of the play bill:

“As far as I know, human beings are the only animals on the planets that put drapes on the windows. Did this practice come about strictly for aesthetic reasons, or was it necessary in order to keep people from seeing the embarrassing way we behave when we are alone?”

“God of Carnage,” originally in French and titled “Le Dieu du carnage,” is just that – A peek inside the curtains of two civilized, successful married couples discussing an everyday, could-happen-to-anyone occurrence, whom we watch unravel to their primitive cores over the course of 90 minutes.

While IU Southeast’s last production, “Damn Yankees,” had a cast of over twenty, “God of Carnage” had only four actors.

“I felt like we could afford to do this show because of its other challenges,” Hesselman said. “The technical aspect of someone getting sick on stage, and the fact that all four actors are out there for an hour and twenty minutes with no break.”

The beginning sequence opens to reveal Veronica and Michael Novak’s living room, a space that will host the entire performance. Veronica (Jenna Lenore Ryan) and Michael (Sean Turley) have invited Mr. Alan Raleigh (Erwin Jacob) and Mrs. Annette Raleigh (Deanna Collins) over to discuss an altercation between their two sons.

Mr. and Mrs. Raleigh’s son has smashed the Novak son’s face in with a stick, resulting in two broken teeth and what we can assume is an expensive dental bill.

Originally, the situation begins as a civilized encounter over fancy espresso and unpronounceable cake (Clafouti? Clowfooty? Clawfoddy?). However, as time slips away, so do humble mannerisms.

Alan, a lawyer, is only involved in the situation at the requisition of his wife Annette, a wealth manager, and his disinterest in the situation is evident from the get-go. He spends a nice chunk of the performance arguing on his cellphone with his assistant, an act that tests the patience of both the cast and audience.

Annette, who continually apologizes for her husband’s behavior, initially comes off as a concerned housewife. As the play unravels, we begin to realize she would prefer to just smooth out the rough edges and be on her merry way. The continually building tension ensues nausea in Annette, who ends up spewing her cookies all over the coffee table and expensive books, a performance that caught me off guard and had me turning my head in disgust.

“For this production, I had to come up with believable stomach bile/puke that didn’t completely disgust the actors or the audience,” Bowyer said. “I ended up using a mixture of dry baby food, coffee creamer, water, and baby shampoo.”

Michael, a wholesaler, just wants to be everyone’s buddy.

“Before each show, I would take a minute to think about Michael, what he wants, how he acts, what goes through his head,” Sean Turley, pre-communication freshman and actor of Michael Novak, explained. “The hardest part was maintaining high energy throughout the performance. The first 20 minutes were just sitting and talking; it was difficult to put just as much energy into those scenes as the ones where we were screaming at each other.”

As the argument ensues, one can watch Mr. Novak bounce back and forth between sides, hovering in the middle, or trailing on about childhood stories or expensive cigars to lighten the mood. As his ends begin to fray, his clothing is ripped off in an angry manner, and the aged bottle of rum is pulled out – now we’re getting somewhere! Within the first few drinks, he pokes and prods at his wife, a small spark that ignites a wildfire.

Which brings me to Veronica, a cultured novelist who probably cares more about the situation than anybody. As she initially seems to be the most put-together and the person most in-control of the situation, she is absolutely the most fun to watch crack. While fulfilling her sociological role of a both a good host and housewife, you can watch her layers peel back from rude, inappropriate comments from both her houseguests and husband. She tries like crazy to keep herself together, but when all formalities are out the door, things really get out of hand for Veronica. In the first chunk of the play, Veronica is making coffee, discussing literature, and serving desserts. By the time we reach the other end of the performance, Mrs. Novak can be seen waltzing around the living room, screaming, assaulting, stomping, vulgar and barefoot, waving a half-empty bottle of rum. Ryan has done a marvelous job at portraying the two extremes of her character – and Veronica is definitely a lady that can go from one end of the spectrum to the other if the right words (and the right alcohol) are involved.

The entire performance is like watching a finely-tuned machine at work; as the play only consisted of four performers, slack in any corner could cause the entire play to crumble. This was not the case, as Ryan, Turley, Collins, and Jacob brought their interactive chemistry on stage and put it to work.

“We work on each production for a total of about two and a half months each, sometimes a little longer,” Hesselman said. “Though we want our audience to come in and think it just ‘happened’ like a magic trick, I think it is worth the students on campus seeing how much work is really going into creating theatre.”