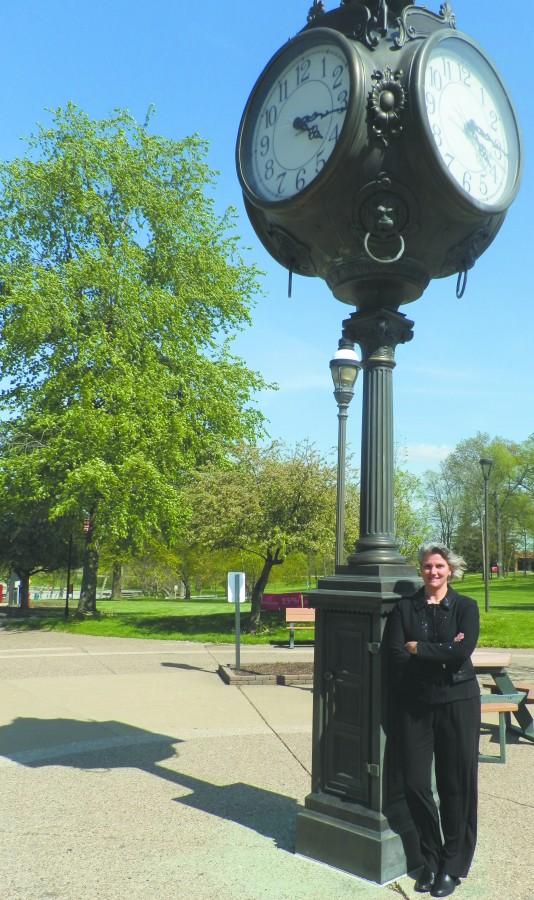 When Interim Chancellor Barbara Bichelmeyer was asked to lead IU Southeast through a period of transition as campus leaders sought out a permanent chancellor, she accepted the position with the intention of giving it her all.

On June 30, 2014, she will pass the torch to the newly chosen permanent chancellor, Ray Wallace, whose position becomes effective the following day. “There’s been a lot of good stuff happening this year, and it’s all gone really quickly, but I’ve tried to take advantage of every minute of it,” she said. 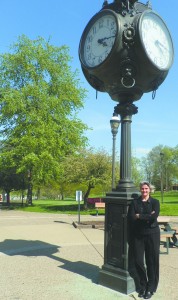 Prior to her post at IU Southeast, Bichelmeyer was the associate vice president for university academic policy and planning, as well as the director of Indiana University’s Office of Online Education. Although the details are not finalized, she said it is likely that she will be returning to her university administrative role for fall 2014.

Bichelmeyer said the experience of leading the campus through the past year has been very meaningful to her, and she has developed an attachment for both IU Southeast and the Southern Indiana and Greater Louisville area.

“My attachment isn’t based on a title,” Bichelmeyer said.  “So now that I’ve found the place I’ll find my ways to continue to be connected and involved and both in that campus and in the community. I’ve let Chancellor Wallace know that I look for those opportunities, and he’s been very supportive of that.”

When she stepped into her interim chancellor role, Bichelmeyer said she knew it was going to be temporary, and said she did her best both to help strengthen the campus and create an open environment for Wallace to transition into.

Bichelmeyer said one of the four main objectives of this year was to look at enrollment and university finances and try to see where there could be improvement.

“We’ve created some new programs – we’re working on having a Master of Science for example, we’re working on certificates and minors in sustainability, we’ve created a general education certificate, we’ve done quite a bit, and that’s the first time in years that there are new programs that have really been initiated to try to meet student interests and economic need in the region.”

Bichelmeyer said there has been a big focus on identifying ways to get the most out of online opportunities for education.

“We just have to learn how to deliver programs using new technologies in ways that serve students well because the students are demanding that, and they should demand that,” she said.

She said her experience as director of the Office of Online Education has perhaps given her a clearer view of where education is headed in terms of the Web, and how to help get there.

“The Internet didn’t change higher education in its first wave because the Internet was a one-to-many mechanism when it first was up and running,” Bichelmeyer said. “But when Web 2.0 came a number of years ago, it created an interactivity that allowed people to communicate, so it’s many-to-many communication.”

Bichelmeyer said this interactivity is at the heart of higher education.

It’s not the lecture that was ever education,” she said. “It was the discussion and the conversation and the engagement between a faculty member and a student and between other students.”

Bichelmeyer said strengthening the engagement between student, faculty, administration and the community is key to moving forward and can contribute to the success of the region.

“This is where solid students and really committed faculty and staff do the work of developing the skills and knowledge that all of our cities and towns need to be successful in the 21st century,” she said. “This area and this campus are so well poised for growth—it’s just exciting, and I think that’s one of the things that makes it hard for me to tear myself away because I’d love to be part of that.”

“The energy and the climate of our university has changed drastically from the top to the bottom” Tominic said. “The level of the student involvement has never been higher. I feel as though the initiatives that not only student government but other student organizations have taken on—we found a partner in top administration that had not necessarily been as strong or as robust.”

“She’s kind of given the entire campus a breath of fresh air,” Moore said. “She’s shown the campus that we’re all more than our positions, we’re people, and she’s also shown us that we should interact with each other as people and when we’re talking, discussing business, we should discuss business as people and remember that each individual is important.”

Moore said he felt Bichelmeyer has been an inspirational presence at IU Southeast.

“She’s definitely done a great job in empowering people to speak up, speak their mind and to go for things they believe in.

Jason Meriwether, vice chancellor of Enrollment Management and Student Affairs, said he has appreciated the experience of getting to work with Bichelmeyer this year, and that she has brought a lot to this campus.

“What I’ve enjoyed most about working with Barb is that she has a good spirit and she’s fun to work with,” Meriwether said. “She’s someone who really always inspires you to be a little more thoughtful. She’s really good at seeing the big picture and attending to detail. You don’t find a lot of leaders who have both.”

Meriwether said Bichelmeyer’s experience with university administration has helped create good relationships and that IU Southeast has already begun to benefit from the support.

“Having that connection that Barb brings with her I think really enhances our opportunity to be connected to those resources to serve our students,” he said.

Meriwether said although he is sad to see Bichelmeyer leave, he believes Wallace will be a good fit for the campus.

“He has a great charm and a great wit—you can sense his creativity,” Meriwether said. “We have a great team right now, and I think he’s coming at just the right time where I think our leadership team is clicking and I think that he’ll be able to insert his own style and leadership capacity and that it’s going to be good for IU Southeast. I love that he’s so interested in the community.

Bichelmeyer said she feels the same way about Wallace.

“He has a personality that will serve the campus really well,” she said. “He understands how great the opportunities here are and we’ve gone through and very systematically talked through all of the changes that have been made and all of the transitions that are going on and to make sure that we don’t drop the ball anywhere if we can help it.”

“He knows that he can call me at any moment in time to ask for background or where we are and knows that I’ll continue to be present and available to be in conversation with him,” Bichelmeyer said. “But he’s a pretty quick study and a pretty smart guy, so I think he won’t need too much before he’s up and running and doing his own thing.”

Bichelmeyer said although this term as interim chancellor will soon be up, the lesson wasn’t wasted.

“I think I’ve learned a lot about myself as a leader because I think the faculty and staff here have been so gracious and willing to let me learn here and to help to educate me about what makes a good leader and have been forgiving of me when I have been less than perfect in that regard, so I appreciate that.

“This is an institution that has been here long before any of us who are here right now, and it will be here long after any of us right now, but just to have had the opportunity, to be a little asterisk in the history of the campus and to have been able to make a contribution, that’s a wonderful gift and I’m very appreciative of it.”