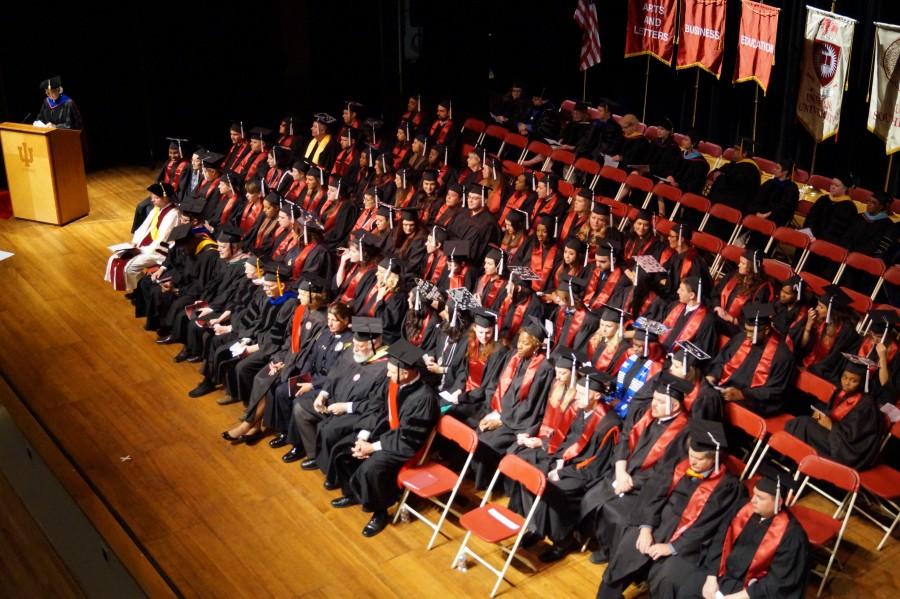 After the originally scheduled commencement ceremony for IU Southeast was canceled last Monday as a result of unexpected potentially severe weather, school officials scrambled to come up with a plan to give the graduating class of 2014 its proper credit.

Every day this week, there are school-level ceremonies in the Stem Concert Hall at the Paul W Ogle Community and Cultural Center at IU Southeast. The first, for the School of Social Sciences and General Studies graduates, was held last night.

Uric Dufrene, executive vice chancellor of Academic Affairs, said despite the cancelation last week, he thinks the first of the alternate ceremonies, which ushered 72 new graduates into the community, was a success.

“I think overall it was a homerun,” Dufrene said. “Our team on campus did an excellent job getting everything together in really less than a week, but just judging from the students and faculty and the families here, I think everybody was very, very pleased.”

Interim Chancellor Barbara Bichelmeyer said the ceremony was very close to what was planned for the outdoor one last Monday. Some differences were that IU President Michael McRobbie and student representative Cory Dixon were unable to attend. Instead, recorded speeches from both were played before the awarding of diplomas.

Monica Wise, IU Southeast Police Sergeant, sang the national anthem and also led graduates and their guests in singing the alma mater, “Hail to Old IU,” at the close of the ceremony. When they returned their robes, graduates were presented with a special gift to commemorate the unusual circumstances of their graduation; a t-shirt that read “Pomp and 30 percent chance.”

Becky White, mother of political science graduate Angel Coomer said she and her family were saddened last week when they thought there would be no ceremony because her daughter worked so hard for this, but she believes that the school did a great job with the situation and she enjoyed the ceremony.

“I think it was wonderful,” White said. “I think that IU really made up to them and it was very good. I’m very happy with how IU handled this—a bad situation they made good.”

Nikki Vejar, criminal justice graduate who minored in psychology, said it felt great to have finally graduated and that she was glad she attended the alternate ceremony.

“I’m the first in my family to graduate so it was really important for me,” Vejar said.

Jennifer Reichert, international studies graduate who minored in political science and French, said she too, was happy to be there.

“You know, it’s something I’ve been working for for so long, it might be the only time I get to do it, I might as well just do it. It was good,” Reichert said.

Michael Justin Miller, who graduated with a B.S. in psychology, said friends that he talked to were in a 50-50 split over whether to attend the new ceremony or not. However, Miller said there was never a moment when he considered not attending.

Bichelmeyer said she hoped that the alternate ceremonies would be meaningful to students and their guests, and judging from the first one, it seems so far that it has been.

For all remaining ceremonies, doors will open at 5 p.m. Graduates will line up at 6 p.m. and at 6:30, ceremonies begin.

Tuesday, May 20, School of Business

Thursday, May 22, School of Education

Friday, May 23, School of Arts and Letters

A reception will follow each ceremony in the lobby of the Paul W. Ogle Cultural and Community Center.

For more information and to watch each ceremony streaming live, visit https://www.ius.edu/commencement/. For questions regarding the ceremonies, email sechan@ius.edu.