After two lockdowns in less than a year, campus leaders explain what’s being done to keep us safe. 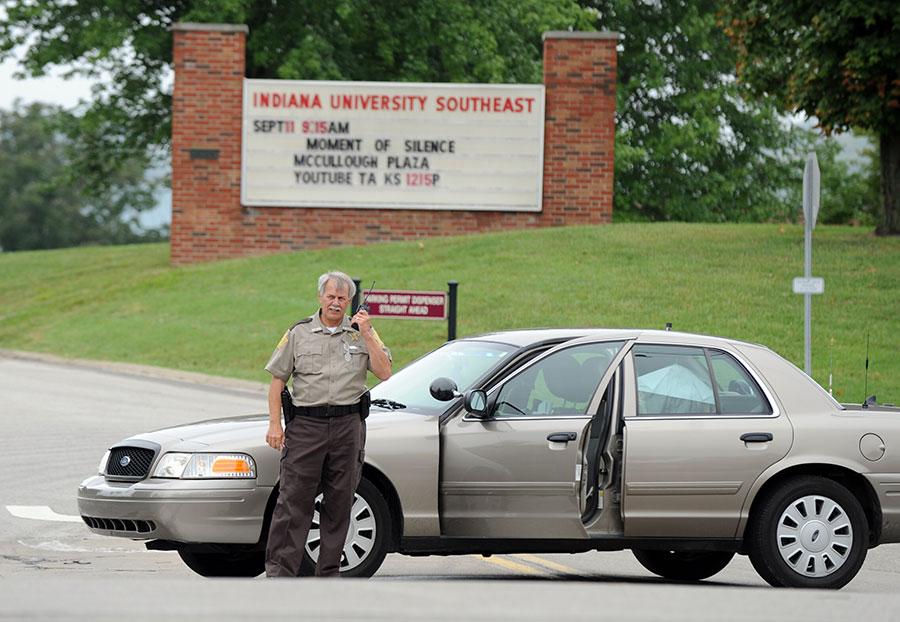 On the afternoon of Sept. 11, the IU Southeast campus was shaken out of the drizzly day with an alert of an armed person on campus.

A student had seen someone walking out of University Center South with what appeared to be part of a weapon sticking out from his camoflague backpack.

The student reported it to campus police, and IU Southeast went into lockdown. What looked like a weapon turned out to be only an umbrella, and the lockdown ended in less than an hour.

But this was not the only recent lockdown for IU Southeast. On Dec. 5, 2013, the campus was locked down for nearly 40 minutes after a student reported seeing a man on campus with a gun. It turned out he wasn’t a threat — he was a student who’d brought a BB gun to use as a prop in a theater final.

In light of the first incident, campus officials took a look at what worked well, what needed improvement and how to get there, in case of a future incident.

Using an after-action report filed by Campus Police, accounts from students, and the work of two faculty committees, the campus began to assess what had happened.

Steve Bowman, adjunct instructor of English, was on one of the faculty committees. He said his group sent out questionnaires and talked with people about their concerns. They found common themes.

“It basically came down to locks, training and alerts,” Bowman said. “Those were the three areas that people were either worried about, unclear about or thought we needed more of. And of course locks is right on top.”
Locks
Dana Wavle, vice chancellor for administration and finance, said that after the Dec. 5 incident, the campus worked to address the issue of the doors that can’t be locked.

“We did an inventory of the number of classrooms on campus and how many locks would have to be retrofitted, and we came up with a number of about 315 doors,” Wavle said.

Wavle said that the estimate to retrofit each door is $500. The total cost would be close to $160,000 and Wavle said the implementation of locks will likely begin during the Spring 2015 semester.

He said IU Southeast is going to use a lock model that IU Bloomington is implementing — it can be switched with a flick of your thumb from the inside of the room. This lock, Wavle said, will keep someone locked outside, but can still be opened easily from inside. That’s important when considering other potential threats, such as a fire.

“When it comes to facility upgrades, we need to be very careful that we’re not introducing something that could impede or impair safety or the ability of a student faculty or staff member to leave a building quickly,” he said.

“When you do put an internal or an interior thumb lock on a door … in a hostage situation that could actually make the situation worse,” he said.

“As with all things in life, it’s all about balance — we’re trying to weigh and balance the risk, and I do think that the benefits of putting a thumb lock on a door do outweigh the risks.”
Training
Melanie Hughes, associate librarian, helped corral students to a secure library location during the Sept. 11 lockdown. She said staff followed the procedures they had been taught by campus police in an earlier training.

“You do things like lower the shades so that people can’t see in … and try to keep people more calm in case there’s a SWAT team running around on campus,” she said.  “Just try to remind people gently to turn off their cell phones and keep their voices down.”

She said although the situation was fairly smooth and students stayed calm, she’d like more training — it’s been a few years since the training she attended.

“I think that we did the best we could, but I was feeling a little insecure that I wanted more training on what to do,” she said. “I think I’d like to have it on a more regular basis.”

The desire for training also appeared in committee recommendations, said Uric Dufrene, executive vice chancellor for Academic Affairs. One group called for more focus on “awareness and information pertaining to an active shooter event,” he said.

As a result of this, he said, the Office of Academic Affairs worked with University Police to provide an online training program for all faculty and staff. Full-time faculty were the first to receive this training material. It came Sept. 16, just five days after the latest lockdown.

“The plan is to provide this training on an ongoing basis,” Dufrene said in an e-mail. “We don’t intend to do one-time video training.”

Dufrene said the first training specifically deals with active shooter scenarios, but the campus plans to add modules on other potential emergencies, such as natural disasters.

There are also plans for a full-scale training exercise in the works, IUS Chief of Police Charlie Edelen said.
Communication
Some who were involved in the Dec. 5 lockdown expressed the need for more communication between the initial alert and the “all-clear.”

In the Sept. 11 lockdown, an intermediate message was sent out, reminding everyone to remain in place and giving a description of the suspect.

“People have a need to know,” Wavle said. “When they don’t receive communication after a certain time, they start getting anxious.”
Other safety measures
Wavle said other security features, such as the fire alarms and campus surveillance camera systems, can play a crucial role in safety during an emergency.

“We went through an extensive fire alarm upgrade,” he said.

Now the alarms can be used like an intercom to send a message from police to the entire campus, he said.

He said the upgraded surveillance system played an important role as law enforcement responded to the Sept. 11 incident. The cameras not only helped identify the location of the individual in question, but “also helped us identify that it was an umbrella and not a gun.”

Another safety protocol that grew from lessons learned in 2013 was the speed at which outside law enforcement agencies were called in, said IU Southeast Police Chief Charlie Edelen. Instead of waiting, the New Albany Police Department and Floyd County Sheriff’s Office were contacted as the IU Notify alert was going out.

However, Edelen said he thinks the response time in sending the alert could have been faster — his goal is to have it out within 15 minutes. It took 21.
Vigilance
Joe Grant, lecturer of criminology and criminal justice and a former Louisville Metro Police officer, said it is crucial that people not become too complacent in everyday situations. They should remain aware of their surroundings.

“The first line of defense is the campus community,” Grant said.

He said the student who called in the report was doing the right thing, even though it was a false alarm.

“That person should be commended for having the courage to call and make that report,” Grant said.

“I think anybody who is in any position at IUS would prefer that they call something in and it be a false alarm than not call it in and it be something serious.”

He said it’s important that people know they should always call in a threat. They should also recognize when members of the community are having troubles.

“We as a campus community have to make a conscious investment in the people of this campus,” he said.

“When we come to campus, we have a responsibility to take care of each other. It’s not just about the individual.”