Man behind the mask

Gary Collins, director of Literally, a Haunted House, has been working haunted houses for 31 years 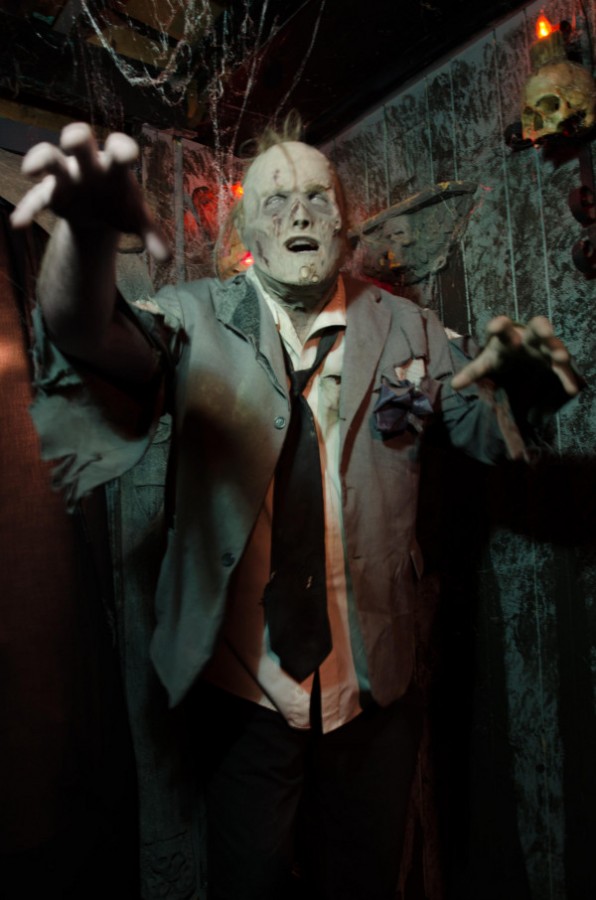 Mind of a puppy dog, body of a killer. That’s Spot, a big goofy zombie leftover from the Nazi regime. That was a major failure on their part. Spot stomps around, but he doesn’t speak any English. He just whoops and hollers and makes silly noises.

Spot was developed by Gary Collins, director of the Culbertson Mansion haunted house, which is called Literally, a Haunted House. He has been working haunted houses for 31 years.

“I worked my first haunted house when I was 12, for Ghost Run,” Collins said. “By the time I was 18, I was in charge of building sets, designing scenes and doing makeup.”

Collins said his brother-in-law had a rudimentary knowledge of mask-making, so he latched onto him quickly after working his first haunt.

“I thought, ‘This is cool,’” Collins said.”I wanted to know how to make people bleed.”

Over the years, Collins said he watched a lot of videos and read tons of books to find out that it was common everyday stuff that a lot of makeup and special effects were made out of.

Collins said for his first experiment, he created an assassination scene with an oozy BB gun, a couple sheets of metal, explosive charges and a few condoms filled with fake blood.

“I set up a friend of mine with a couple sheets of metal under his shirt and filled a few condoms with fake blood,” Collins said. “Then I taped them in and set explosive charges between them and the metal, so when I pressed the button they would go off. It worked great, burned the hell out of the guy, but it worked great.”

After that, Collins was hooked.

“I knew I had to do everything and anything I could to make this work,” he said.

Collins took a professional airbrush class in college and soon after, learned how to make silicon and latex masks.

“I’m not going to say I’m the greatest airbrush artist ever because I’m not, but I love doing it,” Collins said. “I’m partial to zombies, but I’ll do whatever anybody wants.”

After Ghost Run, Collins went to Industrial Nightmare for a couple of years before he left for Literally, a Haunted House at the Culbertson Mansion, which isn’t actually in the mansion itself but takes up all three floors of the carriage house.

“Holly Crisler (event chair and art director) and I became friends through the Louisville Pipe band, and she invited me to come join her in New Albany,” Collins said. “So I watched her do her thing for a season and then told Industrial [Nightmare] goodbye and came running over.”

Collins said running a haunted house is hard work and that they usually start brainstorming ideas in February. Collins, Crisler and a group they call the Illuminati get together for what they call “Pasta, blood and guts.”

“It’s a big dinner we do at Holly’s place and we discuss what we think would be a good idea for the next season.” he said.

Then every March, they go to the Halloween trade show, located in St. Louis, to buy props and makeup.

“Every haunted house in America converges there to buy everything,” Collins said. “It’s the cheapest way to get the most stuff. You’re buying direct wholesale.”

Come April, Collins said a Facebook post is made inviting volunteers to the first haunted house meeting and the upcoming construction.

Collins said groups of three- to- 20 people show up every Thursday at 5 p.m., get inside the house and start tearing everything down from the previous year.

“This year we completely gutted the main floor and redesigned the entire maze,” Collins said. “People get used to going to the left corner to exit the room. Well guess what? That corner is not there anymore. We just try to change things up and make sure that it stays fresh.”

As a haunt veteran, Collins said he has done every type of scare that there is available but that every year is still a new experience.

“I’ve been hung publicly using a harness and wire,” Collins said. “I’ve played every major character including “Freddy and Jason. You name it, I’ve done it all.”

Although Collins has done it all, his heart remains with Spot after noticing how small children would warm up to the character.

“I developed Spot to be kid-friendly, adult-hated,” Collins said. “I will go after and attack adults, but with kids I try to get them on my good side, try to make friends with them, let them know if I go through with them they’re safe.”

Collins also makes sure the other workers know to leave alone the children he’s with.

“If I come through with a kid they know to leave them alone,” Collins said. “Get the rest of the group but leave the kid alone. Seeing the faces of all the kids that I manage to get through that I know otherwise would never have made it is my favorite part.”