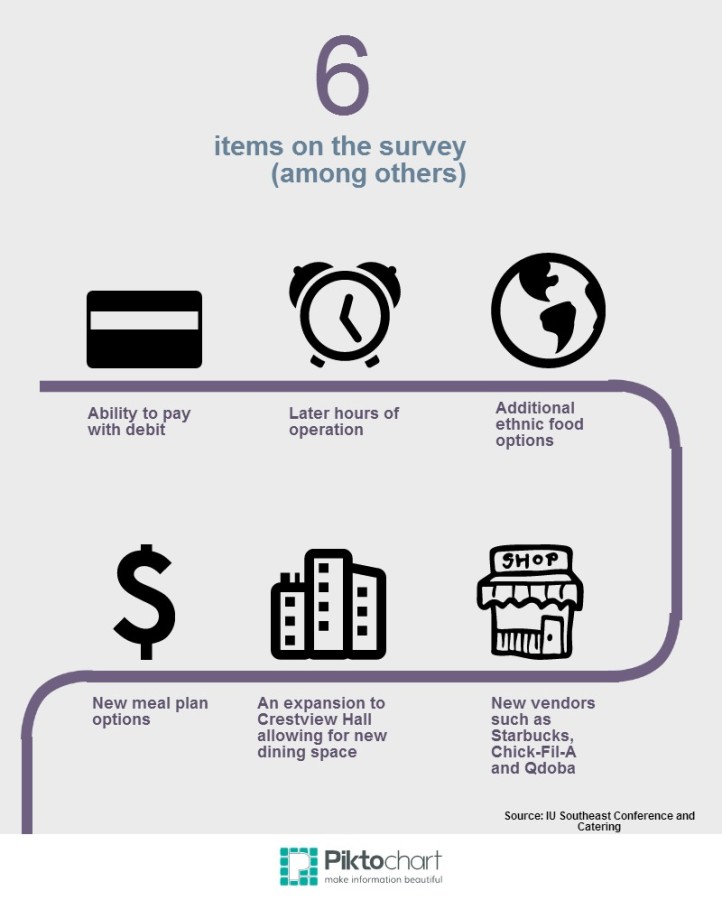 Students at IUS could be seeing changes to the way they get food on campus in the upcoming years.

In November, students, faculty and staff were able to take a survey distributed by the Office of Administrative Affairs via email.

“We brought in a consulting firm that has worked with university dining programs all over the country,” Julie Ingram, Manager of Conference and Dining Services said.

With Chancellor Ray Wallace and the Porter Khouw consulting firm, Dining Services was able to develop the survey along with a ten-year plan for campus dining services.

“With the new Chancellor and the growth of the student population for the future, it’s a great time to re-evaluate the Dining Program overall,” Ingram said.

Ingram also said that changes are in order in several areas of dining services to make them successful.

“The dining changes will be implemented and changed to better service the campus as a whole,” Ingram said. “We are hoping to eventually become ‘the place to be’ on campus.”

According to Ingram, the entire campus is being reviewed and recommendations are being made in multiple areas.

“We are developing the next step for dining now. It isn’t clearly defined quite yet. Dining will be evolving, we just aren’t sure what the final product will look like yet,” Ingram said.

Some of the ideas proposed on the survey included the ability for students, faculty and staff to pay with a debit card, instead of the usual cash or UCard. Later hours of operation, additional food choices, new meal plan options, and an expansion into the grassy area next to Crestview were also listed.

Another change that dining services is hoping to make is to bring in outside vendors such as Starbucks, Chick-Fil-A and Qdoba.

With this survey, Ingram said that they were able to get a better idea of the daily habits of the campus community, as opposed to the yearly survey sent out in the spring.

“Because we service such a wide demographic of students, faculty and staff, the results are contradictory. This most recent survey provided more insight on the residential and non-residential students habits and preferences,” Ingram said.

Chancellor Ray Wallace said that with the rising rate of students on campus and residence hall capacity, food services will have to increase.

He wants to make sure students will not have to cram into one cafeteria in the future.

“If you are on the other side of campus, there should be a place that you can [get] a sandwich and a cup of tea or a cup of coffee. What we are doing is asking students ‘what do you like? What would you like to see?’” Wallace said.

Wallace also said that they will take the feedback from the surveys as well as the campus budgets and develop a plan. “We want to hear what people say,” Wallace said. “It’s college. It would be a great place to have a real pizza place where you can go in, get a slice and a coke and watch a little ESPN between classes.”

Though Ingram said that these changes would be a long-term process – an estimated ten years total – students can expect to see changes as early as this summer and fall semester.

“The changes will be minor at first but we are always looking out for the best interest of our customers,” she said. “It is a cultural change. Just because this is how things have always been done doesn’t mean that is the best way to do them.”

Chancellor Wallace has been at the helm of the changes coming to campus, working closely with dining services to help develop the plan for these changes.

“It is primarily a commuter campus, but I want to ensure that people who are here, whether they live here or just come for two or three classes have a place to eat quality food that is open a great deal of the time,” Wallace said.

Ingram said that one of her hopes when it comes to the changes in dining services is that it will become more sustainable and financially stable. She also said that she is personally excited to be a part of all of these changes coming to campus.

“Any changes that help us remain self-operated so we can hire our students and become financially independent will be a success,” she said.

According to Ingram, dining services hopes to become a feature of the campus and a recruiting tool for Campus Life, Athletics and Admissions instead of simply a service for the campus.

When it comes to the well-being of students and what they would like to see happen, Ingram said that they plan on including students in the process of implementing these changes.

“The students’ best interest will be taken into account every step of the way,” she said. “This is the primary reason that we are starting now. Input from the students will be vital to make any changes to the operation.”

With Chancellor Wallace at the forefront of the changes on campus, Ingram believes he will lead campus with growth and success into the future.

“Any changes we make in the dining program will only support those changes,” Ingram said.

Ingram also believes that other areas of campus, such as offices and classrooms, will also be facing changes in the future.

“The consulting firm that we are working with promote themselves as social architects,” said Ingram. “So for the students we are hoping that this will come with a student oriented facility that offers great food, comfort, technology and camaraderie.”