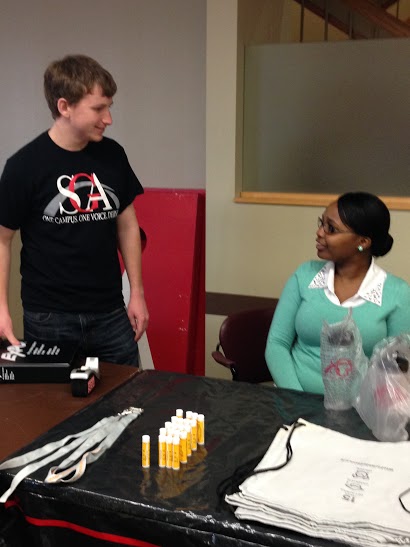 The Student Government Association held an event during Homecoming Week despite recent leadership changes, and the organization is planning other events.

The SGA discussed its homecoming event and upcoming events during its meeting on Thursday, Feb. 12 at 4:30 p.m. in University Center North, room 122.

Students, faculty and staff could eat free cookies and brownies, and they could win prizes by shooting basketballs. The prizes included SGA T-shirts, water bottles, drawstring bags and other items.

“I would say that was probably one of the most successful events we’ve had so far that I’ve been to,” Nesbitt said. “It was nice to see the school turn out for it.”

Additionally, due to the popularity of last year’s GUSTalks, the SGA will hold another GUSTalks event this semester.

The SGA is still planning details of GUSTalks, but Andrew Takami will be one of the speakers. Takami is the director of Purdue University’s College of Technology on Charlestown Road in New Albany.

The SGA is also planning an end-of-the-year celebration. Trent Wallace, SGA president and advertising and communications senior, will meet with Student Alumni Association president Josh Crase to plan details of the celebration.

Besides discussing events, the SGA members voted on a bill to request office supplies for the SGA office.

The bill passed with an unanimous vote.

According to the bill, the SGA will request pens, legal notepads, a hole punch, white-out sticks, printer paper, and other supplies. The total cost of the supplies will be about $220.

In addition, members of the SGA budget committee will attend a budget hearing on Friday, Feb. 20 at 11 a.m. off-campus. The committee will review its presentation after the next SGA meeting.

In her resignation letter, Memady said that being a part of the SGA was a “pleasurable learning experience.”

For more information about the SGA and its events, contact Schoettmer at chmschoe@ius.edu.