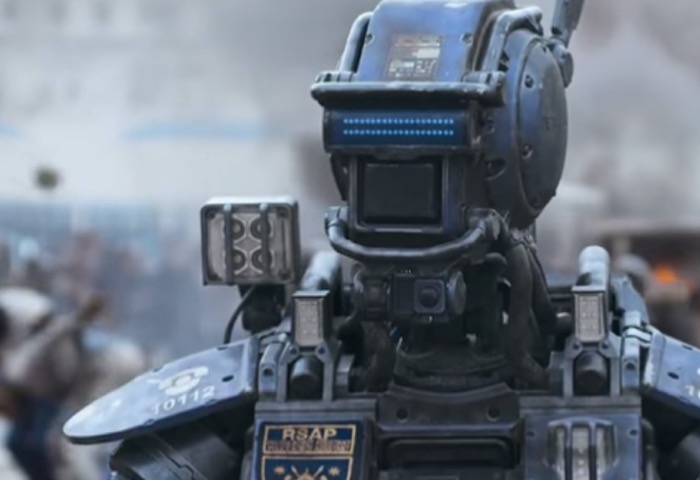 Neil Blomkamp burst onto the world consciousness in 2009 with smash hit District 9, a beautifully rendered science fiction film that depicted the harsh brutality of South Africa’s Apartheid. Blomkamp immediately became considered a hot commodity and a thought-provoking director. Discussions about his turning down the job to direct the upcoming Star Wars film in favor of keeping to his own work. That work became Chappie, a story about a robot that was given consciousness and sentience. It was a great concept.

… and, great concept only. To call Chappie a poorly-made film is a kindness, as the film fails on nearly every aspect it handles. What could have been a thought-provoking film about the meaning of being human and alive instead is an over-convoluted disaster that does nearly nothing in a positive manner. It doesn’t even manage to be fun.

How did this guy make District 9?

Let’s go with the most immediate issue the film faces- its lack of star power. The two most valuable members of the cast, Hugh Jackman and Sigourney Weaver, are almost totally underutilized, particularly Weaver. The woman that played Ellen Ripley –possibly the most important sci-fi character in film history- being reduced to mere seconds of a role is practically criminal. Unfortunately, Jackman, the film’s antagonist, doesn’t fare much better. A character that seems to be a rather important figure in the narrative is rather a mystery in regards to his motives. Yes, he wants to get his project funded and sold (a giant mech that’s almost a carbon copy of Robocop’s ED 209), but what else? Not much.

As to the main cast themselves, they either go from unlikeable to annoying, and not much else. The three gangsters, Ninja, America, and Yolandi, play caricaturized versions of their real selves- which is a South African rapper group that apparently Blomkamp is a fan of. I have yet to rid my subconscious of Yolandi’s unbelievably high-pitched, piercing voice and I fear I never will. None of the three are characters you can like because- well, they’re criminals. Chappie ends up copying much of their mannerisms and so ends up having much of the same issues. Deion (Played by Dev Patel), isn’t given much substance or much to work with, so it’s hard to warm up to the character.

Though characters are an extreme issue, the plot is such a demoralizing mess that all the multiple plot threads it tries to juggle rang from an anti-God tirade to-

Actually, I’m not sure. There’s a lot of plot points being thrown around in this movie and none are actually resolved. There’s remarks about gang violence, police armaments, sentience, but that’s all they are- remarks. Nothing of substance or value is ever said, and the storyline suffers because of it. It feels like multiple writers were thrown at making this film and all wanted to say something different, and then one final writer came in and neutered everyone else’s opinion. If Blomkamp wanted to say something with his story, he failed in spectacular fashion.

The movie isn’t all that long, sitting at around two hours, but it feels like it lasts forever. The primary reason being is that there are only two action sequences in the entire film, one at the beginning, and another in the final ten minutes. The former is interesting because you’re still curious about the premise, but the latter is so deep in the film that all the interest you’ve had early on is lost in the drab dullness of the film’s length. It’s just a scene, one that promises no fun. It happens, and it’s over in an instant.

Not too long ago, it was announced that Neil Blomkamp had been selected to helm the Fox scifi/horror smash series Alien, with a new entry to take place between James Camerons’ 1986 sequel Aliens, and Alien3. Fans rejoiced that the series would be revived by the man that directed District 9, particularly by a man that seemed to be such a fan of the series. I was among those fans who was ecstatic to see one of science fiction’s most prolific sagas be resurrected.

Now I’m worried. Chappie was a failure of filmmaking, it’s only redeeming factor being the gorgeous special effects. Beyond that, Blomkamp directed the film into a nosedive and let the film crash and burn. It’s a bad sign for the future, particularly when such an important series is in the director’s sights. Blomkamp has to rebound, and rebound soon, because Chappie needs to be reset- and forgotten.