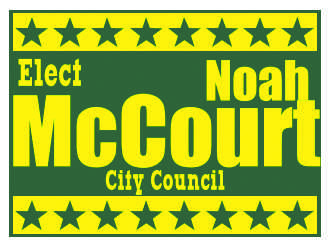 Noah McCourt is 21. He is a psychology freshman here at IU Southeast. And, if you are a resident of New Albany’s 6th District, Noah McCourt needs your vote.

McCourt is running for New Albany city council as a Republican and, on May 5, a primary election will allow New Albany voters to choose him or one of his two opponents to be the party’s candidate in the general election. If chosen in both elections, he would replace current city council member Scott Blair as the representative of New Albany’s 6th District, the district to which IU Southeast belongs.

Angeline Russel, sociology junior, worked with McCourt in the IU Southeast SGA and has high hopes for him.

“He puts all of himself into whatever he gets involved in,” Wallace said.

McCourt grew up in Minnesota’s foster care system and spent time in a living situation he described as abusive. By the time he turned 20, McCourt had decided he needed a fresh start.

“I had family down here,” said McCourt. “So it wasn’t just a fresh start, but a reunification for me.”

Once he arrived in Southern Indiana, McCourt had to make a decision on where he would continue his education.

“Louisville is just such a big university that it all becomes a bit impersonal,” McCourt said. “Southeast is a smaller campus which means smaller class sizes, a tighter community, and a more personal connection with the teachers.”

Almost immediately, McCourt jumped into student government. In 2014, McCourt was elected to the post of associate chief justice of SGA where he and his fellow justices were responsible for interpreting the SGA’s constitution.

“It could be hard work, but I’m the kind of guy who needs to keep busy,” McCourt said. “It gave me an opportunity to get to know people. To get to know my community.”

As the year progressed, McCourt took stock of New Albany’s political landscape and the community of which he was now a part.

“I knew I wanted to run for something, but I didn’t know what,” McCourt said. “I wondered what I had to offer. I wanted to make sure I was running for the community. Not for myself.”

McCourt’s need to run came from a desire to give back for all the things he feels New Albany has given him.

“I’m not in this to build a career. I’m a psychology major, not a political science major,” said McCourt. “I have no intention of becoming a career politician.”

Ultimately, McCourt was drawn to city council for the same reasons that drew him to IU Southeast.

“When people think government, they tend to think big,” said McCourt. “But a lot of stuff comes down to the local level. Indianapolis may be bigger, but it feels removed from the other parts of the state.”

McCourt felt he could make more positive impacts on people’s lives if he were closer to the people he was representing. And he had very clear opinions on where he could start.

“I’m worried by the way we are handling our finances,” McCourt said of New Albany and its current city council. “We have a very reactionary approach to spending. We’re dipping into funding resources and overextending ourselves.”

McCourt said he believes the city council should be focusing more on the city’s existing infrastructure. He proposed allocating money for the maintenance and repair of the community’s recreational centers.

He also pointed to what he felt was the less than adequate state of many 6th District roads.

“It may not be a flashy issue, but it’s a real issue. A blue-collar issue,” said McCourt. “I’m a blue-collar kind of guy. And I believe real issues need real people to solve them.”

McCourt also conveyed his belief that New Albany could be doing more with the city’s waterfront real estate.

“Just look at what Jeffersonville has done with its waterfront,” McCourt said. “That’s worked out extremely well for them and their economy. We could do the same thing in New Albany.”

McCourt criticized the council’s recent attempts to keep the Pillsbury plant from shutting its doors and moving out of the city. He posited the opinion that Pillsbury was never going to stay anyway and believes the $7 million raised to keep it from going could be used to bring in the same amount of jobs, if not more, into the city from other sources.

“This is not a particularly Republican stance,” said McCourt. “But if we have $7 million to throw after a corporation, we should be talking about putting that money back into the community. About throwing it back to the people.”

He also criticized the current administration for lacking transparency.

We need to talk to the people we represent more because those people matter,” said McCourt. “Transparency matters.”

A connection to the community gained from talking with its citizens is something McCourt takes seriously. During the days of extreme snowfall in February and March of this year, McCourt used the free time provided by IU Southeast’s closure to walk the district’s neighborhoods and check in on his fellow citizens.

“It’s critical to keep the community involved,” said McCourt. “I’m from Minnesota. I can handle the cold.”

McCourt was complimentary of his Republican opponents. He expressed excitement for Nicholas Vaughn, who at 17 is the youngest of the three candidates, and described Larry Belcher as both nice and personable.

McCourt said that, if he lost in the primary election, he would not hesitate to throw his support behind the victor.

“I’m not taking a full load [at IU Southeast], and City Council is not exactly an 8 to 5 job,” said McCourt. “It’s all about time management and being disciplined in keeping to the schedule you set for yourself.”

Another area McCourt acknowledged might concern voters is his youth.

“I feel like people may worry I lack experience,” McCourt said. “To them I’d point out that we have put bankers, businessmen, and others with experience in money management on City Council, which has gotten us higher debt and a crumbling infrastructure. At what point do you start to ask about how useful that experience is? How is it helping us?”

McCourt said he believes any experience he lacks he makes up for in qualities the council itself is sorely lacking: a blue-collar work ethic, a connection to his community, a lack of greater political ambition, and a focus on the real issues.

“What the City Council needs more than experience is a fresh viewpoint. And that’s what I’d bring,” said McCourt. “New Albany opened a lot of doors for me. I want to make sure they remain open.”