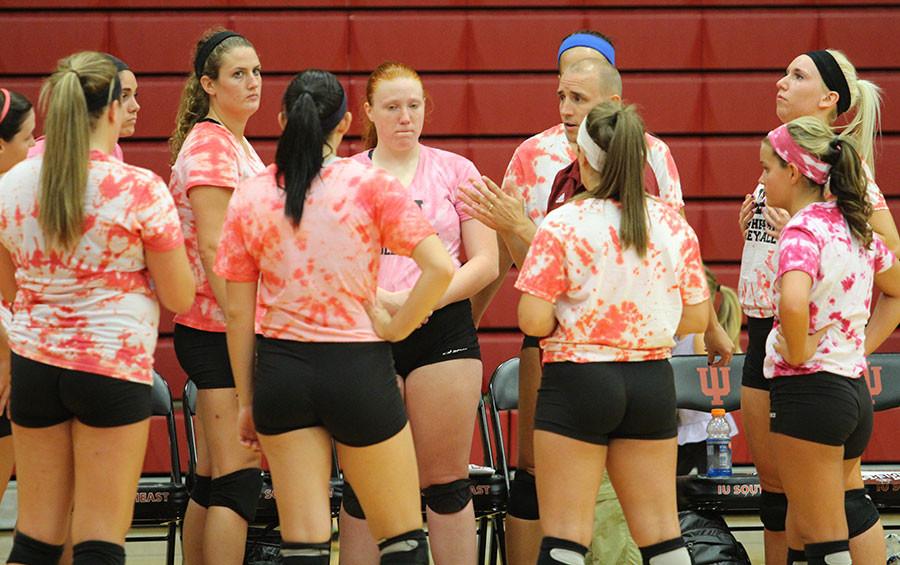 Coach Brian instructing his players while battling in the fourth set of the alumni game on Wednesday, Aug. 26.

As the IUS volleyball team prepare for their upcoming season, many questions arise. Who will  take the leadership role with no seniors on the roster to be leaders in the locker room? Will head coach Eric Brian be able to lead this young team to their third straight conference championship appearance? All those questions will be answered this upcoming season.

Last season the Grenadiers struggled in the regular season with an overall record of 16-19. Despite the poor record though, the Grenadiers made a deep run in the KIAC tournament before losing in the championship game.

Communication problems last year has been a main target for the Grenadiers to improve before the season starts.

“The key thing is communication. Last year there was a split because we had a lot of seniors on the team,” Katie Fischer, junior middle blocker, said.

This year the team is without any senior leadership on the roster. Instead they are very young with five new freshman on the team along with defensive specialist Caitlynn Pfaadt, a sophomore transfer student from the University of Pikeville. With unfamiliar new faces now on the team the Grenadiers have worked hard this offseason to establish a nice communication as a team.

“We’ve met with the girls since July and have been working on team bonding,” Fischer said.

The Grenadiers not only have worked on honing their communication skills on the floor, but they have also been working diligently this offseason to be better perform wise.

With no presence of seniors on the team Fischer and Barker, two of three juniors on the team, will look to step up and take the leadership role that is missing from no seniors. As far as if they are up for the challenge or not, well they have already worked to make the team closer this offseason.

“We’ve stepped up and took the leadership spot and got everyone close,” Fischer said.

Fischer and Baker have been close since high school and acknowledge that there two years prior to this season will prepare them to be leaders on the team.

“We have played here since freshman year and are pretty familiar with coach and we have played together since sophomore year in high school,” Barker said.