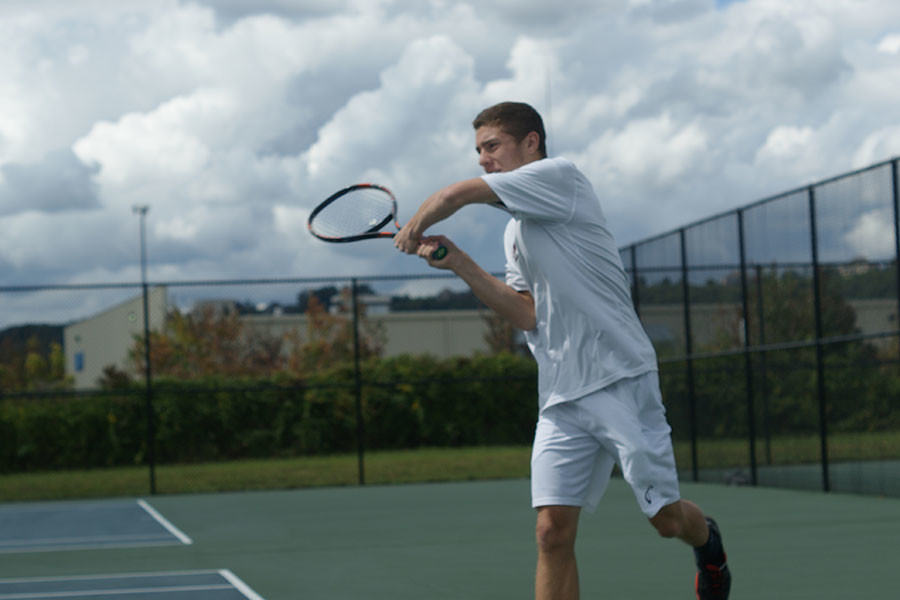 Freshman Mitch Staley after hitting the ball in his match Saturday, Sept. 12 against Indiana Wesleyan. The Grenadiers lost the match 7-2.

The IUS men’s tennis team were defeated by Indiana Wesleyan on Saturday, Sept. 13 by a score of 7-2. The Grenadiers are now 1-1 for the season following the loss to the Wildcats.

In doubles senior Nick Roby and junior Jacob Rankin won the only doubles match against the Wildcats in No. 1 doubles 8-3. The duo had great communication and looked in sync the whole match.

“We played together last year and we know how to play well with each other and we came out on point,” Roby said. “We attacked the ball and didn’t let them have any chances. They were a great team, but we came out stronger than them.”

For the other doubles partners, junior Chris Braun and junior Jonathan James lost 8-3 in No. 2 doubles, and senior Trent Wallace and junior Alex Martin lost 8-4 in No. 3 doubles.

In singles the Grenadiers were outmatched by Indiana Wesleyan as they were able to win only one singles match, which Braun won in a close and intense match in No. 6 singles (6-4, 3-6, 7-6, (8-6)).

“Staying focused towards the end of the second set, it got away from me,” Braun said. “In the third set I stayed with what I did right.”

The Grenadiers started off in their matchup, as many players fell behind in the beginning of their sets. Unforced errors seemed to be the main cause hindering the Grenadiers.

“Too many unforced errors, giving them too many free points, and not taking care of the simple stuff like getting first serves in play and returns in play, those are the main key,” head coach Joe Epkey said.

Epkey pointed out that as long as the Grenadiers fix the errors that they had on Saturday against the Wildcats that they’ll be fine the rest of the season.

“Eliminating all of those errors as far as being a little more conservative with our shot selection and making sure that when we are in trouble to keep the ball in play and basically giving a tougher fight and make the other team earn points instead of giving it to them,” Epkey said.

The Grenadiers will next face Bellarmine University in the Bellarmine Round Robin on Saturday, Sept. 19. The time for the match is still to be determined.