How One Game Can Start Something World Changing 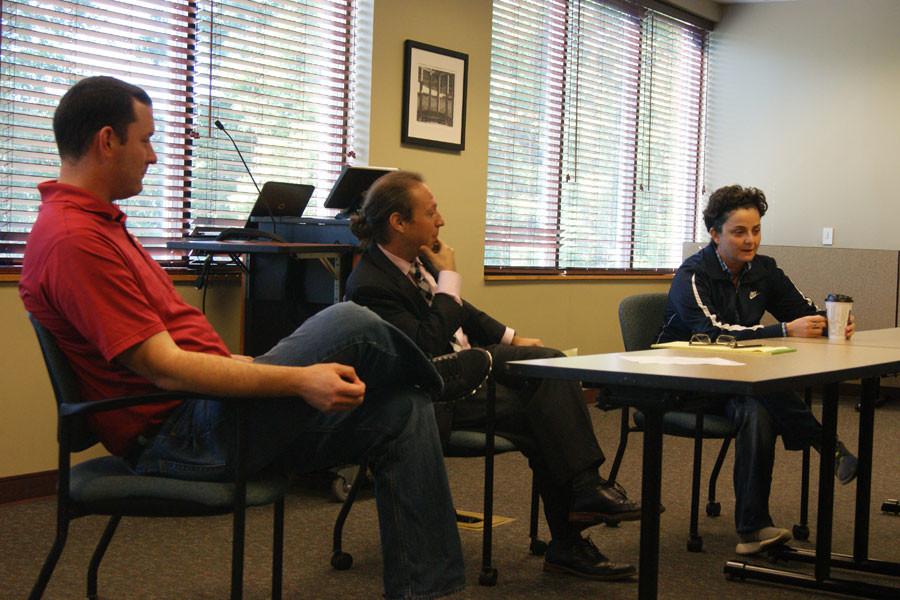 The IU Southeast Common Experience hosted a special guest on campus last week for their “Building Communities in a Global Society” series.

On Sept. 22, Luma Mufleh gave two speeches while on the IUS campus to students about her involvement in helping refugees live successfully in America through her non-profit organization, Fugees Family, and how to overcome obstacles in life.

Born and raised in Jordan and of the Muslim faith, Mufleh said soccer was the one thing that kept her going. Mufleh had a tough time while in the Middle East because of her sexuality and, as Mufleh explained, you could be sentenced to the death penalty if you are gay.

After deciding that she could no longer live in the Middle East, Mufleh wanted a fresh start. Her childhood helped her understand what type of work she wanted to pursue.

She saw kids playing soccer in a parking lot with no shoes on, grabbed her ball and asked to play. By just playing that game, she knew that they were from war torn countries. This one game evolved from six players to over 30.

After that, there were weekly practices and games. The kids loved it. The name of the team, The Fugees, was different than other team names but it caught on. The Fugees also differed from the other teams because the roster has players all from refugee countries.

Mufleh immigrated from Jordan and moved to Atlanta, Georgia where she started the Fugees Family program. The program places refugee teenagers on a soccer team. Kids ages 12 – 19 and from 28 different countries are currently in the family program.

On Sept. 20 in the afternoon, Mufleh shared her coaching philosophy, obstacles and accomplishments with student athletes in a question and answer style seminar.

Mary Dye, senior forward for the IUS women’s basketball team, said she could relate to Mufleh. During her college career, Dye has gone through a lot of obstacles.

“Basketball has always been like Luma said, an outlet when you have been through tough times,” Dye said.

With all sports, school is needed for someone to play. This is something Mufleh used with her kids. She then expanded from just a soccer team to a school strictly for refugees.

“My boys were set up for failure from day one. They would be put in age appropriate classes when they can’t even add two and two,” Mufleh said. “These teams have suffered through a lot, and yet my boys never complained.”

In this supportive but challenging environment, the Fugees Academy brings together diverse cultures and customs while working to prepare students to build a better life, just like Mufleh did.

She explained that within the last three months, Fugees Family was in a legislative effort to expand scholarships efforts to refugees. It passed the Georgia State Court unanimously 115 to 16.

This year will be the first class to complete the Fugees Family program. Four members of the program have gone on to play soccer at a collegiate level. American University and Pfeiffer University are both offering Fugees Family members a spot on their college roster.

“The most rewarding experience is to watch these kids mature,” Mufleh said. “Because the majority of kids come in angry or, in some cases, violent. Watching them transform into adults and bond over the game is amazing.”

Mufleh discussed the obstacles of bringing kids from vastly different cultures together and how soccer helps to ease the tension that may be involved. Mufleh gave an example of two Iraqi refugees, one identifying with the Sunni branch of Islam and one identifying with the Shia branch. These two teenagers would have been enemies in Iraq, but soccer gave them a chance to bond and connect with one another.

These two teenagers would have been enemies in Iraq, but soccer gave them a chance to bond and connect with one another.

Mufleh was raised playing soccer on U.S. Embassy teams. All of her coaches were United States Marines, which influenced her coaching philosophy.

“I am tough on the field, but I love all of my players,” Mufleh said.

As an example of her tough love approach to coaching, Mufleh described the racial slurs that fans would shout at her players during the game. To desensitize her players to this type of behavior, Mufleh recorded this speech on her iPod and played it over speakers at practice.

“It is easier dealing with that language the sixtieth time than the first,” Mufleh said.

In the book “Outcast United: A Refugee Team, an American Town,” written by Warren St. John, tells the story of Mufhel’s life and dreams, which is used by some professors at IUS.

Co-Director of the Common Experience, Veronica Medina, said that they pick a different book each year to focus their curriculum around. The Common Experience is a group that tries to influence others to think differently about big events that matter.

According to Medina, the Common Experience is run out of Academic Affairs and is referred to as a high impact program by educational researchers.

“Common Experience is designed to integrate students, facility and even members of the community into an intellectual dialogue,” Medina said. “Mufleh’s talk couldn’t have come at a better time because we are currently in a global refugee crisis.”

Elementary education freshman, Katie Toan, is in the process of reading the book for her first year seminar class. Medina said that the book is aimed at first year students because it is informative, but it also because it tells a good story. Toan said that Mufleh’s story was an amazing inspiration to her.

“Being an elementary education major, there’s a lot for me to take away from her story. She’s doing it for the kids, not for herself, but for the kids and to me that’s the best reason she could have,” Toan said.

Offering the kids jobs during or after their schooling is another thing that Mufleh is doing with the Fugees Family program, having created two businesses: Fresh Start, a cleaning service and Queen Food Company, a food truck.

These businesses also help the families of the refugees around the area by paying them a decent wage. Mufleh said that it provides a steady income so they can live here comfortably.

IUS faculty and staff also filled the audience. Professors from other departments also came to hear Mufleh’s talk, and the message remained the same throughout.

“Anyone can change the world,” Medina said. “That’s exactly what Luma made us feel like.”

After Mufleh’s talk, the student and faculty in the audience ended the night with a standing ovation, as IU Southeast’s way to thank her.

The Common Experience will host the Kentucky Refugee Ministries on Wednesday, Oct. 7, from 6 to 8 p.m. on the third floor of the IU Southeast Library for a discussion titled “Refugee Adjustment to Life in American Communities.”

“Mufleh’s talk was a great start to this years series,” Medina said. ” I hope everyone comes to the library to listen [on] Wednesday.”