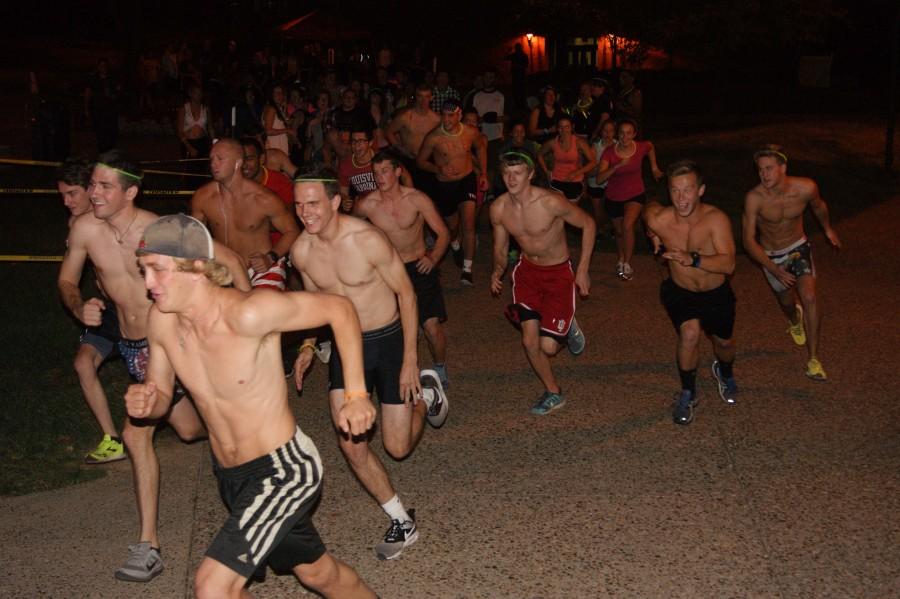 The students begin the event as secondary education junior Dakota Brooks sprints into an early lead. “This is a great event. You get to hang out with friends and meet some new people on campus,” Brooks said.

The Student Alumni Association held the annual Nearly Naked Mile on Thursday. The event is a fundraiser for the SAA where students complete a mile long course around campus.

To participate in the event, students had to be a member of the SAA. Membership costs $5 for a semester.

The Nearly Naked Mile had an awards ceremony after all the contestants finished the course. Gift bags were given to the top three finishers. Awards were also handed out for best male and female costumes.

“This is a great event. It’s a fun way to meet new people and have a good time with friends,” Brooks said.

Senior and president of the SAA Clayton Rose said that the Nearly Naked Mile is a fun and interesting way to increase SAA membership and fundraise at the same time.

This is the seventh year for this event at IU Southeast.The concept of the idea was brought from the Bloomington campus.

Criminal justice and psychology sophomore Jenna Bicker is the vice president of the Student Athletic Board. Bicker said it is important for IUS organizations to show support for one another by attending events.

Multiple organizations participated in the mile in order to show support for their fellow IUS groups. Phi Sigma Sigma, Tau Kappa Epsilon, and the Student Athletic Board were among the groups involved.

“It’s nice to be able to come out and support the other organizations at our school,” Davis said.

The SAA will sponsor more upcoming events as fundraisers. They will host a powderpuff football tourney on October 25. Proceeds from this will be donated to benefit breast cancer awareness.