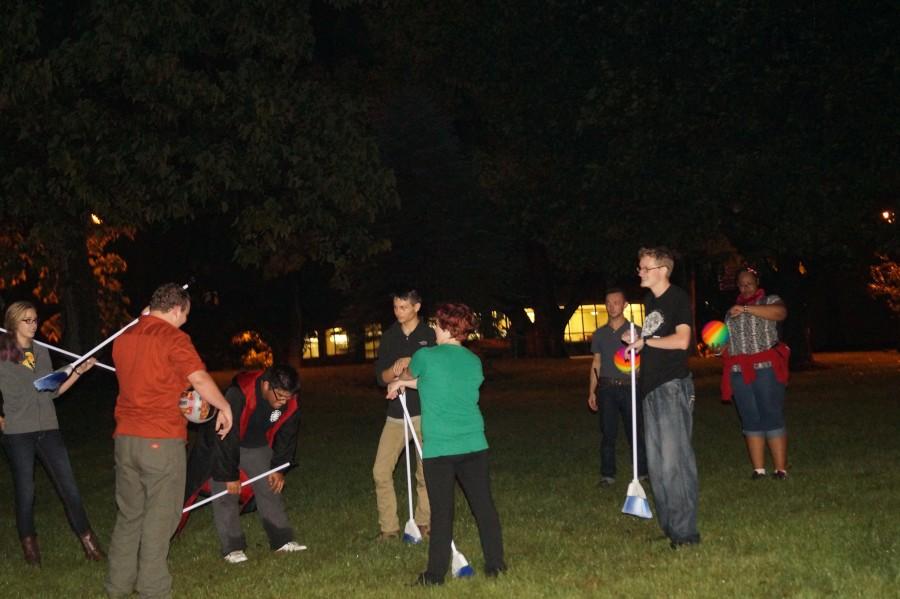 It was cloudy, windy and cold as “Brooms up!” was yelled to begin the quidditch match on Tuesday night from 7:30 to 10 p.m. The Castle Club hosted their first ever club event at the frisbee field but due to weather conditions the event ended at 9 p.m.

According to the IUS Grenadier Central website, “the purpose of Castle Club is to discover and learn about medieval and renaissance literature, legend and lore; Arthurian Legend, as well as that which has derived from it, including ‘Harry Potter,’ ‘Lord of the Rings’ and ‘Chronicles of Narnia.’”

Amanda Miles, Spanish and criminal justice junior, is the president and founder of the Castle Club. Miles founded the club in March 2015 with about 15 members.

“I really love how everyone in this group wants to step up and take on leadership roles. They are a wonderful group of people,” Miles said.

Christian French, psychology senior and vice president of the Castle Club, was in charge of gathering equipment, supervising the use of equipment regarding campus rules and adapting ‘Muggle Quidditch’ standardized rules for IUS.

“Castle Club allows people to come together and talk about stories that have impacted their lives from fandom-centric topics to roots and medieval literature,” French said.

French also said that the Castle Club is currently working on a ‘Tri-Wizard Tour,’ which will include various obstacles for participants to complete. This event will be held the entire length of the semester.

Before the game started Miles informed the players about quidditch teams and their roles in the positions they would play. The information included the number of players, the position choices they could play and how they will play that position and use the equipment provided.

Miles allowed all players to pick the position they desired to play after informing them on the rules and guidelines.

Goal: Get the quaffle (slightly deflated volleyball) through 1 of 3 goal posts hoops (gold spray painted hula hoops).
Chasers work with the quaffles.
Beaters throw dodge balls at chasers.
If players are hit by dodge balls they must run to their team’s goal hoops before returning into the game.
Keepers guard the goals/hoops.
The snitch runs around avoiding contact with players and seekers.
Seekers chase the snitch (player with a tennis ball/sock in back of shorts).
The player that catches snitch ends the game.
Quaffles thrown through the hoops earn 10 points.
Catching the snitch earns 30 points and ends the game.
The team with most points wins.

During the match teams made up strategies to sneak around and capture the golden snitch, which was played by Jackson Kerly, computer science sophomore.

Quintera Quinn, English junior, has been a member of the Castle Club since it formed. During the game she played a beater.

“Quidditch is really fun. Even though it’s raining we are all having a great time,” Quinn said.

Throughout the evening, players joked around as they slipped and slid through the slick grass and mud due to the rain.

Miles and French made sure all participants signed required waivers due to campus safety policies. These waivers are signed by all participating and later turned into Campus Life for records.

Players dodged dodge balls, blocked players, ran around the clock tower and frisbee field throughout the cold and rainy night until the game ended when the snitch was captured by political science freshman, Jeff Baugh.