The journey of Division I transfer Jocelyn Mousty 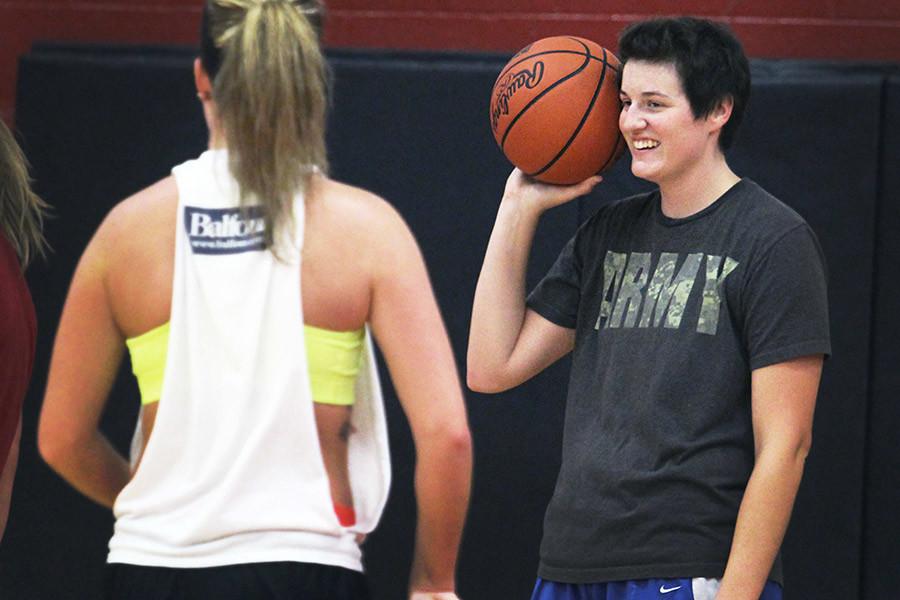 Mousty during the IUS women's basketball practice. She is a junior forward and former Indiana All-Star.

IUS women’s basketball player Jocelyn Mousty recently transferred to IU Southeast from Texas Tech. This meant a transfer from an NCAA Division I school to an NAIA school.

Mousty came from a small town in Fredericksburg, Indiana, so she’s no stranger to the area.

She graduated from a small 2A school in Pekin, Indiana where she was an Indiana All-Star.

Mousty, who comes from a family of natural athletes, began to play sports in the third grade. Her older sister, Jordan Basham, was her inspiration.

The sisters weren’t able to participate in organized leagues together due to their four year age gap, but that never stopped them from playing together around the house.

“Not only is she a great sister, but I couldn’t ask for a better friend,” Basham said of her relationship with her sister.

Mousty’s move to Texas Tech separated her from her older sister.

“From Indiana to Texas we have managed to remain very close,” Mousty said. “As my mom would say, ‘we are thicker than thieves’.”

Mousty talked about the sizable impact that her grandmother had on her early in her basketball career.

Mousty lost her grandmother when she was 17, and the impact that it left on her was long-lasting. She said the loss of her number one fan and biggest supporter made her momentarily lose her love for sports.

While the loss of her grandmother was a traumatic experience, she prevailed and learned to lean on her family and friends to help her get through.

When talking about the loss of her grandmother she said the reason she was able to come out on the other side of the ordeal was the support she had.

When asked what motivated her she said it was the will to be successful.

Mousty credited her grandmother as one of the main reasons she decided to stick with playing basketball.

“There will be times where you will become defeated in life but it’s whether you rise to the next occasion and realize that you’re better than what you think,” Mousty said.

Mousty talked about how in life things happen that you can’t prevent, but you do have control over what you choose to do next.

“One of the most important lessons in life that I’ve learned is always getting up after you’ve fallen down no matter what,” Mousty said.

After graduating high school, Mousy redshirted at Indiana University for the 2012/13 academic year. She then went on to Santa Fe College in 2013/14, and, from there, to Texas Tech University.

Coming from a small town, Mousty knew there were no guarantees the big schools would be looking to recruit her.

After graduation, she received a full athletic scholarship to attend IU, as well as all the other schools she’s attended.

When asked what she was most proud of Mousty said, it was playing basketball in college.

“Not everyone gets the chance to play basketball especially in college,” she said.

Mousty isn’t the first in her family to play college sports, her sister Jordan Basham played softball at Bellarmine University.

“If you’re capable of playing college ball, take full advantage of it and enjoy the experience for as long as you can,” Basham said.

Mousty left Texas Tech because of personal issues she had with the athletic program. Before she chose to attend IU Southeast she contemplated going back to Santa Fe.

While she enjoyed getting to experience different colleges and their athletic programs, there was something none of those programs were able to offer Mousty. IU Southeast offered her the chance to be close to home.

IUS women’s basketball coach Robin Farris said IU Southeast has become successful in recruiting players who go away to college out of high school only to decide to come back home.

“We always try to keep an open door, even if they don’t choose IU Southeast right out of high school,” Farris said.

Farris spoke highly about having Mousty on the team this year. He said that, with the help of old players and new players like Mousty, the IUS women’s basketball team has a lot of potential this season.

“The conference has gotten better, and Mousty will be faced with good-sized players,” Farris said. “She’s competitive and will respond to it in a positive way.”

She said she’d like to go back to her high school and speak with students there about the rewards of doing well in school and following your dreams.

Her compassion doesn’t stop there. Recently, Mousty donated her hair to the Locks of Love American Cancer Society, and she’s looking into participating in the St. Baldrick’s charity.

Seeking a degree in sociology, she said she sees herself as a future counselor or doing something with children.

“If I could get through my hard times in life, I can also help someone get them through theirs,” Mousty said.