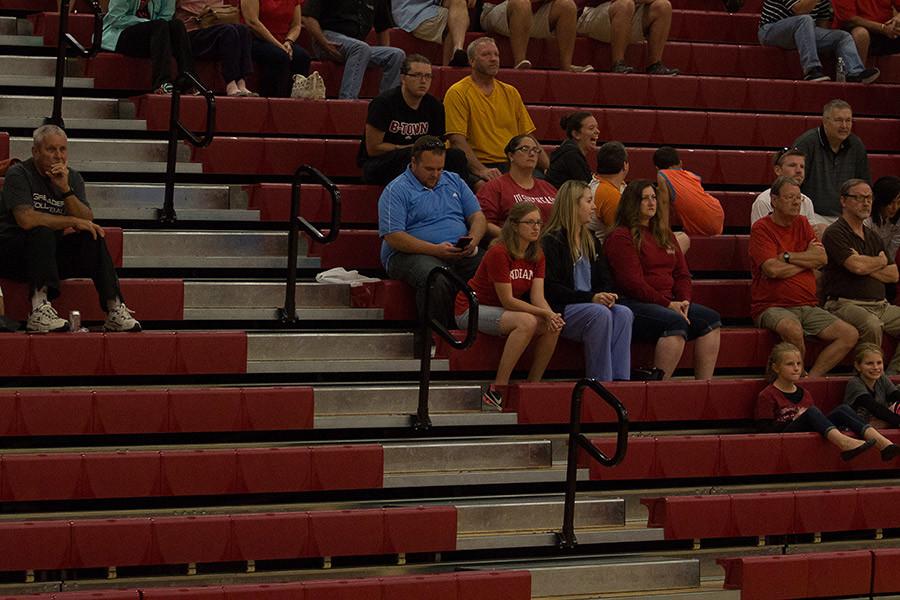 Some of the crowd at the IUS women's volleyball game against Point Park University on Sept. 18.

Throughout college sporting events every college faces their own challenges with decline in sporting events. In Division I athletics they deal with their high ticket prices or quality of opponents. Though at the end of the day in such popular sports like football and soccer they will have the support of their own student base, alumni and fans.

Athletic Director Joe Glover said that at the start of this year we have had good turnouts for the first few volleyball games we have had these numbers. Against Spalding University 155, IU East 110 and against Point Park 146.

These are good numbers at our school, but according to Jake Franklin, education junior who works the scoring table at sporting events, it’s been families that tend to come to games more than students have.

Lower division schools, such as IU Southeast, face different challenges. For starters we are a commuter school, meaning that unlike big universities like IU Bloomington and the University of Louisville we do not have a large population of students on campus. Franklin also feels that we lack some of today’s most popular sports, like football and soccer.

“I also think that because that we are a commuter school versus IU Bloomington we have most people leave and go home after their classes and don’t stick around for athletic events,” Franklin said. “I feel like if we had football and soccer our attendance at games would improve.”

Football is one of America’s most popular sports whether it’s at the high school, college or professional level. In January, the Oregon and Ohio State football playoff game gave cable TV and ESPN the highest ratings in their history, averaging 33.4 million viewers.

“Sports like football and soccer are easier to get involved with than others and are interesting to watch,” Mariah Bauer, nursing sophomore, said.

The student athletic board advertises and promotes sporting events by hosting pre-game events like tailgating and hanging fliers around the buildings on campus, but some students think more could be done to improve awareness on campus.

“If the school advertises it way more. If they would get their name out, such as banners and fliers advertising who we are playing that night, it would help our attendance,.” Franklin said.

A major thing that this school lacks that makes sports so interesting is a rivalry. Having a rivalry is a big thing for sports. It makes students, athletes, fans and faculty band together against a rival school and support their team.

“If we had a rival school then we could have special events, like back home during football and basketball season when we would play our rivals we would have special nights such as a black-out or white-out or something,” Franklin said.

In college basketball some of the most watched rivalries, such as Duke vs. North Carolina or Kentucky vs. U of L brings a huge attendance to their own games. Even though this is a smaller university and is in a lower division. A rival makes everything in sports which makes games more interesting and helps with attendance.

“Plus we could also fundraise for that night to. We could have people come out to that game if we had a rival in the division,”Franklin said. “I feel it would be more exciting if we had a rival.”

Right now it`s difficult to name a rival for our school and for the many sports that we have at this school, each sport has a different rival. Glover said that volleyball and tennis can look forward to playing against Asbury University, while for softball it’s Point Park University.

“For every sport is a different team, for instance IU East in some sports is our rivals and it changes, Asbury is our rival in basketball and for baseball it’s Rio Grande.” Glover said.

The Franklin and Bauer said that they think students have a hard time figuring out who is our rival and what game is the biggest of the year.

“If we had a big rivalry game then [students] would be more prone to going to games,” Bauer said.