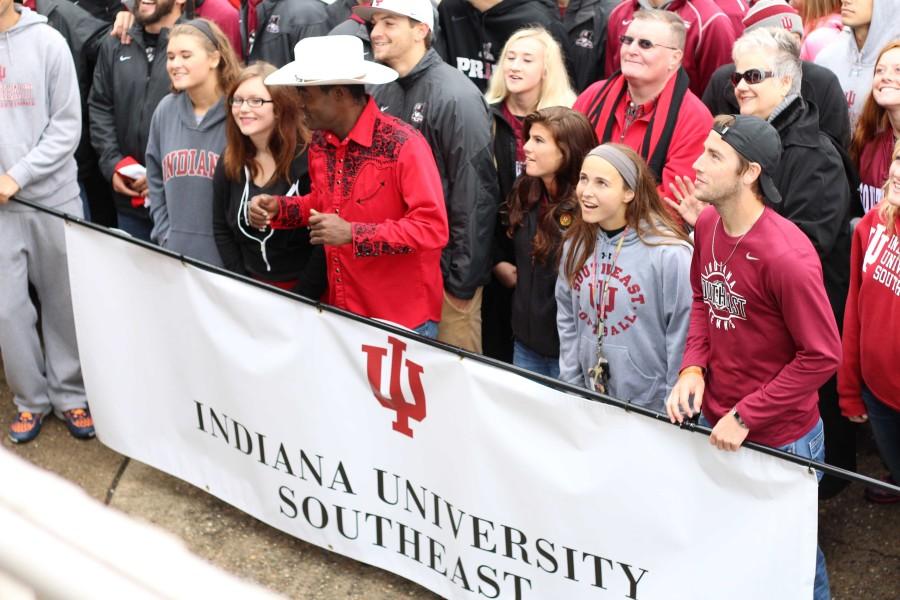 The parade ended with a group photo. All of the people that attended for IU Southeast squeezed in together.

IU Southeast and other local businesses walked the streets of downtown New Albany to kick off the Harvest Homecoming festivities on Saturday.

The parade started at 12 p.m. on Vincennes Street, in front of New Albany High School. The parade then headed south onto Spring Street with the final stop being W. Spring Street.

The theme for this year’s parade was “Hot Rods of New Albany,” so most floats were centered around cars.

The parade was broadcast on the local radio station 88.1 WNAS. Concessions were available to buy along the parade route by various churches and civic organizations.

Leading this year’s float was Chancellor Ray Wallace, who was driven around in a new 2015 red Corvette.

“It was nice to see all these people come out and support us in the cold,” Chancellor Ray Wallace said.

Representatives from the IUS athletic department brought up the rear. Senior center for the IUS men’s basketball team Jordan Thompson said that he has walked in this parade eight years straight.

“In high school we walked in the parade for sports,” Thompson said. “This one has to be one of the coldest in the history of the parade.”

Harvest Homecoming will be going on all next week with various activities to participate in and enjoy in downtown New Albany. The craft and food booths begin on Thursday Oct. 8 and end the following Sunday, Oct. 12.