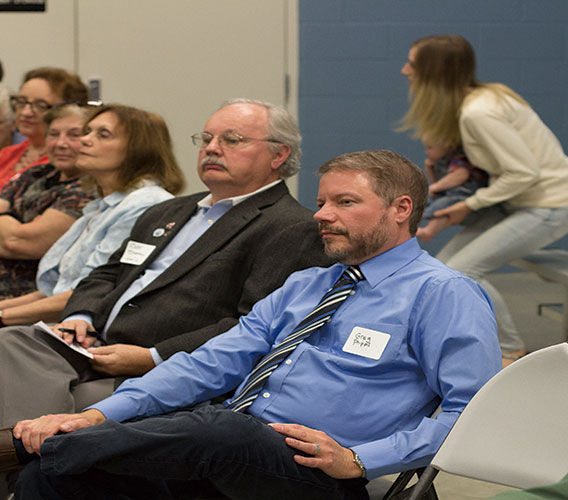 When election day for New Albany’s city council arrives on Nov. 3, two members of IU Southeast’s faculty will be on the ballot.

Cliff Staten, Professor of Political Science and International Studies, is running as the Democratic canidate for New Albany’s sixth district council seat, a district in which IU Southeast resides.

He is running to maintain his seat as the district race’s Democratic canidate.

For Staten, the interest in city council began in protest of a small creek run off near his home.

The creek gradually became more and more problematic for him and his neighbors.

“I moved here in 1989, and it started out as not a problem, but over the years that small creek had turned into a raging river,” said Staten.

“It’s eroding the banks and in twenty-five years time it has gone from three feet wide to about thirty feet wide and has gotten to the point where it is now eroding people’s property.”

Staten was aware that a water plan was in place to deal with the city’s water-related issues.

Being government minded, he decided to look to the city council for answers.

“Our area wasn’t even on the plan that I looked at, so I decided that something needed to be done,” said Staten.

Staten worked as IU Southeast’s dean of social sciences from 1998 to 2010. During that time, Staten faced decisions ranging from in-house promotions to tenure and was an integral part in some of the major financial changes made in the department.

“I’m not afraid of tough decisions and understand that sometimes they have to be made, especially in city government,” said Staten.

“I’m used to working in small groups, something that I believe translates to city council because they are necessary to get things done, especially when working with someone who is across the aisle from me, and I don’t necessarily agree with. That’s an asset that I have.”

For Phipps, the interest in city council started in a way similar to Staten’s.

The desire to make a change came about in response to his 2001 move to downtown New Albany.

“I didn’t have a lot of involvement in politics when I lived in the suburbs. I was out of touch with what was going on,” said Phipps.

“I moved downtown and started to see the urban problems that I didn’t see while living in the suburbs.”

Phipps began his crusade for change by going to city council meetings and bringing attention to the variety of concerns being neglected in the surrounding city.

It was during this that he saw that there was an opening in the board of zoning appeals.

“The then Republican mayor, Regina Overton, actually appointed me to the board of zoning, which was my steppingstone into politics,” said Phipps.

His desire to run for city council in his district came in 2011 and the years that led up to it.

“The leadership that we had in our particular neighborhood wasn’t progressive enough, so I thought that I could offer a different vision for change in New Albany,” said Phipps. “I ran because I wanted to make a change.”

While the interest in city council first began as a means of solving issues that were central to each of them, Staten and Phipps have broadened their goals and have made an effort of honing in on the ideas that need to be implemented into the city.

Both candidates intend to create the necessary dialogues within the city council to fix some of New Albany’s problems while expanding what the city has to offer.

Though this upcoming election is Staten’s first ever run for New Albany city council, he said he is already brainstorming some ambitious ideas in anticipation of being elected to the position.

The most enterprising of these ideas has to do with New Albany’s relationship with IU Southeast.

“The way that a town grows is by making sure to keep young people around,” said Staten. “You need to make sure that they want to stay and can benefit from staying, something that can be done by improving the quality of life that is possible in a city. You also need to consider the opportunities that are available.”

Staten said minimum wage positions are not enough to help inspire younger generations to start their lives where they grew up. He believes there should be a more focused approach at increasing the quality of jobs being offered.

“There need to be jobs that provide young people with a way to raise families and that offer a feeling of satisfaction with the work that is being done,” said Staten. “Obviously, the trick is figuring out how to do that.”

Growing up in a small town in West Virginia that is currently in the throes of struggle, Staten has first hand experience in what can happen to a town’s ability to thrive when those in charge spend too little time considering the impact that younger generations might have.

“From that respect I believe that I have the unique advantage of being involved with the younger people at IUS and think that for any progress to be made there really needs to be a better connection between New Albany and IUS,” said Staten.

“There needs to be a much better integration of the two because there are so many great things going on around campus. After twenty-five years of being here I can still see that we aren’t so good at getting that message out, which I really believe will help attract more businesses.”

Staten is running against Scott Blair, the current sixth district council member who is running as an independent, and Larry Belcher, the Republican candidate.

Scott Blair was contacted for comment but a meeting could not be scheduled in time for the publication of this article.

Belcher agrees more should be done to create a better relationship between New Albany and IUS.

“I think that education is very important to New Albany’s future,” said Belcher.

Blecher’s run for city council came in response to community issues being overlooked.

These issues have played integral parts in his campaign, but Belcher’s concerns have always involved furthering the expansion of New Albany’s influence.

“We need to bring in more businesses to employ the graduates of IUS,” said Belcher. “Therefore keeping families in the community.”

An interest in city expansion and continuing New Albany’s forward momentum is shared by Phipps as well.

“We want to continue with this change that is taking place and attract more businesses to the downtown area, which we have done a pretty good job of so far,” said Phipps.

While he said downtown New Albany has made some considerable changes for the better in recent years, Phipps said he believes there is still plenty to be done.

Many storefronts continue to remain vacant, and he wants to solve this issue with the continued growth of new and exciting businesses.

“One big issue, especially in my district and the downtown area, is code enforcement,” said Phipps.

According to Phipps, a large portion of downtown New Albany is riddled with dilapidated properties, many of which are owned by absentee landlords that reside out of state.

Rent is being collected from these properties with little no to regard for the quality of the houses that are being rented out.

This is causing a sharp decrease in property values in addition to the neglect to quality of life for the tenants living in the properties.

Phipps is concerned the issue is only getting worse.

“The landlords of these properties have no regard for what they are renting and something needs to be done about this,” said Phipps.

Another concern is the one-way traffic issues that have long been a problem for downtown New Albany.

“It’s an issue particularly for my district and those in the urban areas,” said Phipps. “There has been a push from the neighborhood to get those streets converted into two-way streets.”

In response to this issue, the city commissioned a study with the nationally known firm, Speck and Associates. The purpose of the study was to analyze the layout of the city and increase its proficiency.

The firm produced a plan that supported Phipps’ position, suggesting every street located in the downtown area should be converted into a two-way street for the benefit of traffic efficiency and to help produce more pedestrian friendly environments.

“When there is one-way traffic people use it as a cut through, which is why it is another one of the big issues that I’ve been pushing this year,” said Phipps. “Hopefully we can bring about each of these changes in the coming years if I am re-elected.”

Dale D.M. Bagshaw, the Republican candidate who is running against Phipps, did not respond to a request for comment.

Staten and Phipps share visions for expanding what New Albany has to offer its residents “Greg Phipps and I go way back, and we have similar ideas,” said Staten.

“He and I have worked closely together before and having two members of the IUS faculty on city council would likely make it easier to help express the advantages of merging New Albany and IUS.”

Staten said he is well aware that bringing more vitality to New Albany is a much more dedicated goal than solving the issue with the creek that initially sparked run for city council, but is hopeful for the changes that could potentially be discussed if he wins the election.

“I may get the issue with the creek taken care of sooner rather than later, but convention centers and branding, these are things that I would ultimately like to work toward,” said Staten.

Phipps shares Staten’s enthusiasm about working alongside one another.

“I think Cliff would be a fine addition to the city council,” said Phipps. “I look forward to working with him if we both are elected.”

Staten and Phipps both said they have high hopes for the future of the city and believe without the aforementioned considerations for change, particularly the motivation to engage the interests of younger generations, New Albany will not be able to thrive.

“No matter the city, state, or region, the principles are all the same,” said Staten. “If young people leave, the area dies.”