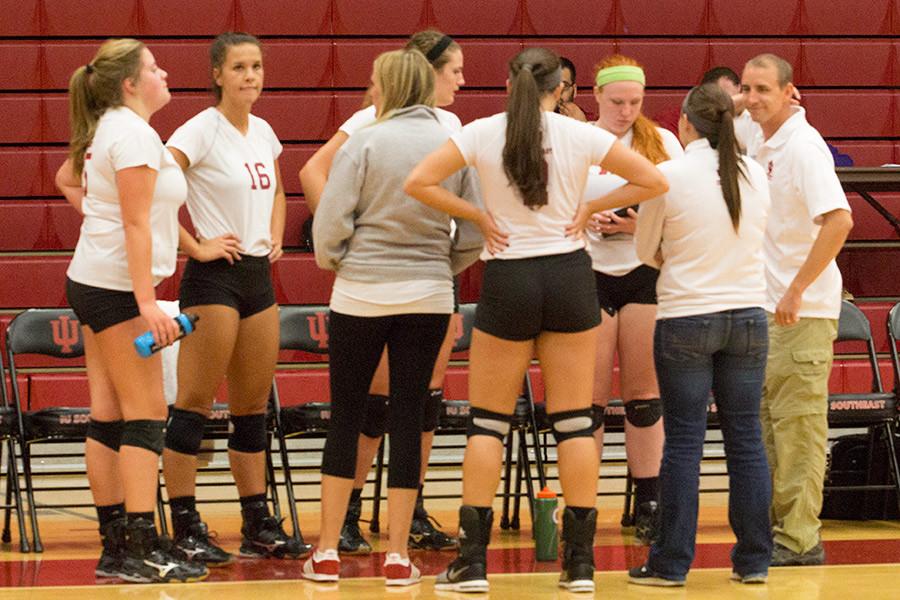 The IUS volleyball team huddles up after a set in their match against Midway University on Tuesday, Oct. 13. The Grenadiers won the match and continued their win streak to seven games.

The Grenadiers improve their overall record to 14-7 and are 8-2 in conference play.

“We did a good job coming in with a game plan of what we wanted to do to beat them and that’s what we needed to do,” head coach Eric Brian said.

In the first set, the Grenadiers took an early lead and won the set 25-16.

In the second set the Grenadiers once again took the lead early on and were leading the set 24-22 but had trouble closing the set against the Eagles. They were, however, able to end the set winning 25-22.

“I think a lot of practice and our serving is strong and Katie Fischer did a good job with her short serves,” Pfaadt said. “I think our team work talking to each other, communication, blocks, and kills went into this (win).”

During the Grenadiers’ seven game win streak they have not allowed the other team to win a set, winning 21 consecutive sets.

“When we win we do a good job of winning games in three sets, so we just need to get stronger when we have adversity,” Brian said.

The Grenadiers next play at home against Asbury University on Thursday, Oct. 15. Asbury is currently third in the KIAC standings, while the Grenadiers are fifth.