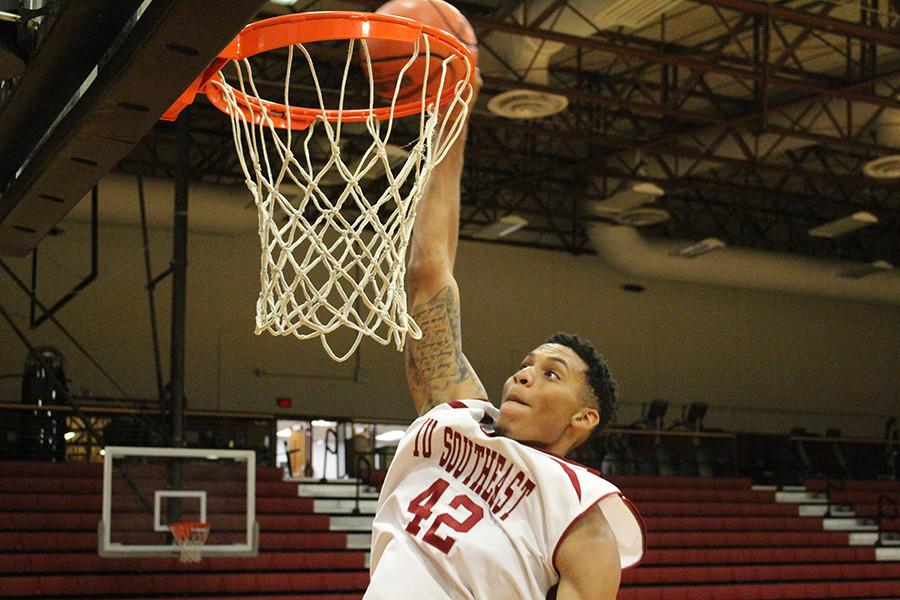 Jordan Thompson, senior forward, dunking the ball in the Activities Building. Thompson is also pitching for the IUS men's baseball team during his senior year.

This year, senior Jordan Thompson will step onto the hardwood court to finish out his collegiate basketball career. He will then stand atop of the white rubber slab that is approximately 60 feet and six inches away from home plate for the first time in four years.

Thompson plays center for the IUS men’s basketball team and, starting this year, he will pitch for the first time in his collegiate career for the IUS baseball team.

Playing two sports and managing the responsibilities of college seems like a huge workload for anyone, but Thompson’s been doing it his whole life.

“This isn’t new to me,” Thompson said. “I did this all the time in high school.”

He played football in the fall, basketball in the winter and then finished the school year with baseball.

The only season he missed of the four years playing was his junior year, when he broke his right tibia in a basketball game.

Thompson said football and basketball were his two favorite sports because of the constant action, but he has always loved looking out from atop the pitching mound.

The one thing that held him back from playing baseball in high school was the injury that sidelined him for most of the baseball season.

On top of his fractured his right tibia, Thompson was further limited in his senior year by a nerve he pinched in his neck.

Thompson said his freshman and sophomore years on the mound were the best he ever pitched. He said his best game was a game against St. Xavier High School.

The Highlanders ended up losing, but while Thompson was on the mound, he gave up only two hits and no earned runs.

“My high school baseball career was short lived, and I didn’t really play much due to injury,” Thompson said. “I am looking to trump all those high school seasons with one outstanding college season.”

One of Thompson’s biggest supporters is his mother, Toni Thompson.

She said Thompson and his brother, Jeffrey, participated in all of the sports in high school.

He is two years older than Jordan and half an inch taller, but Thompson says that he can beat his brother in any competition that they play.

Even in high school, Thompson looked up to his brother.

“Jeffrey was a big influence when we were in high school,” Thompson said.” I saw him participating in multiple sports, so I did the same thing. I tried every day to be better than my brother.”

Jeffrey Thompson is currently playing baseball with the West Michigan Whitecats, a single A- team in the Detroit Tigers organization.

Toni Thompson said it wasn’t that her sons needed all the attention, but that it was more like they wanted to see which sport they liked the most.

Thompson’s father, Jeff Thompson, knew what sport he wanted to play at a young age. He was also a college athlete, and he chose football.

Jeff Thompson said he loved going to the football games but has developed a love for baseball which is now the biggest sport in his life.

The supporting cast for the Thompson brothers are constantly on the move. They travel from the Activities Building to all over the U.S. to watch their oldest play.

Toni Thompson said she and her husband are at just about every game, but it isn’t just those their support they are receiving. Thompson said that he can expect five to ten other family members to come and support him. Whenever he is able, Jeffery will be found sitting among them.

“There was no animosity between them,” Toni Thompson said. “They always supported one another. Every time Jeffrey is in town he tries to make it to one of Jordan’s game and vice versa. Jeff and I are right behind the one watching.”

She said Jordan is fully capable of the physical aspect of playing two sports, but the thing scares her is the limited time Thompson has to juggle the three aspects of his collegiate life: basketball, baseball, and school.

Thompson said it was time to try something new. Instead of only having one practice a day and being a full-time student, Thompson now goes from basketball practice to baseball conditioning on top of his unchanged, academic workload.

Thompson, however, has no doubt in his ability to thrive in his new schedule.

“I love being challenged,” Thompson said. “All I am doing is trying to make my senior season one to remember because once it’s over it can easily be forgotten.”

Having a brother who has already been through the college athletic experience helped Thompson understand what he will experience in his senior year.

“Even in high school, Jordan watched Jeffrey participate in all three sports. It showed Jordan that he can take on the challenge too.”

Thompson has been on the basketball team for all three seasons and is looking to bounce back after the team went 8-16 last season.

Before last season, Thompson was on the 2013 basketball team that went all the way to the NAIA Final Four. Thompson said has been one of his favorite memories at IU Southeast.

In his three years as a collegiate athlete, he has seen the floor quite a bit, playing in a total of 66 games as a Grenadier.

He has scored 137 points, 85 of them coming in last year’s season. He also has grabbed 213 rebounds.

“Jordan gets a lot of easy dunks and blocks around the rim,” Brown said. “His athletic ability is amazing on the court and even in the weight room.”

Jordan and the Grenadier’s season begins on Oct. 24, against Harris-Stowe State University, in St. Louis.

Three days later, the Grenadiers have their first home game against St. Catharine.