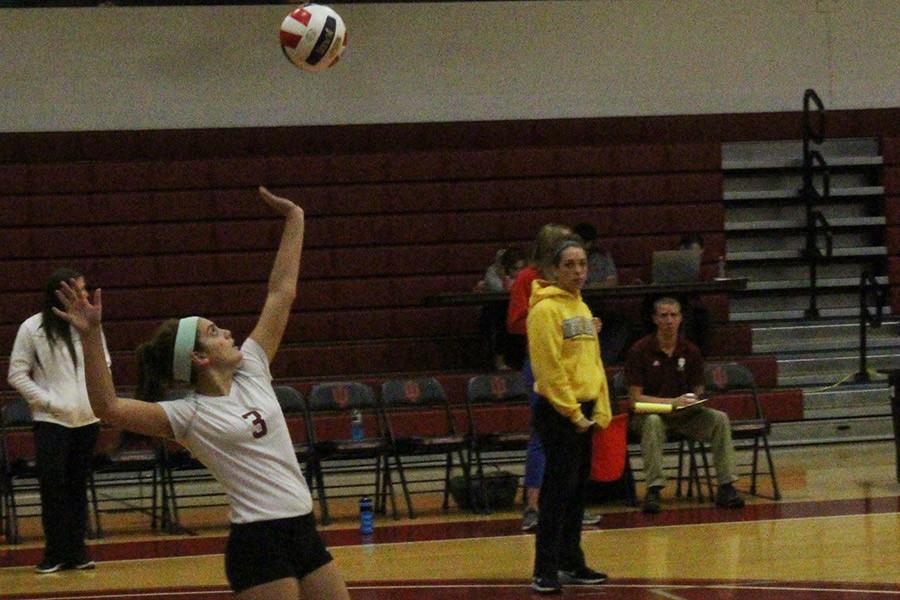 Maddie Jacobi, freshman defensive specialist, prepares to serve the ball against Oakland City on Tuesday, Oct. 20. The Grenadiers lost the match in five sets for their second consecutive loss.

The loss is the second straight five set loss for the Grenadiers.

Throughout the next few sets, the Grenadiers and the Lady Oaks would go back and fourth.

The Grenadiers would drop the third set to the Lady Oaks 20-25.

In the fourth set, the Grenadiers lead 24-21 at one point in the set. However, Oakland City then went on a 4-0 run to take the lead.

The Grenadiers, though, fought hard and to keep from losing a point and the set. They then went on a 3-0 run to comeback and win the set.

“We kind of lost focus and a lot of it had to do with not being in the right position, but at the end of the day they were a good team and they did what they needed to do,” Hannah Barker, junior setter, said.

Katie Fischer, junior middle blocker, and Monica Loftus, freshman right side hitter, both had 9 kills in the match.

Both Loftus and Joly had 18 digs for the Grenadiers.

Barker, who averages 9.8 assists per set, had a game-high 52 assists.

On Friday, Oct. 23, the Grenadiers will have a doubleheader against Goshen College and University of Cumberlands.