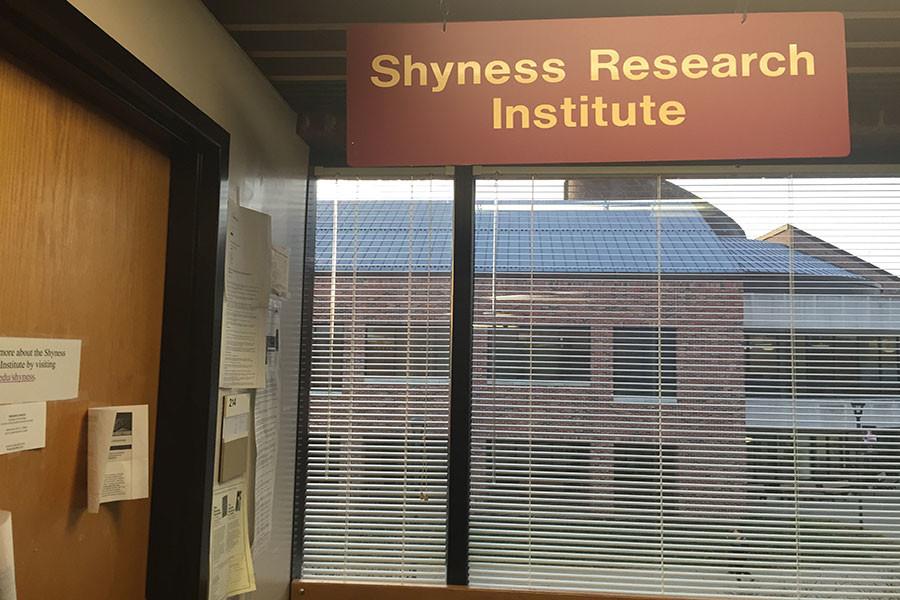 The Shyness Research Institute, located on the second floor of Crestview Hall.

Erin Coffee, journalism sophomore, said there was one defining moment in her youth. It was at the beginning of her eighth grade school year when a student sat next to her on the bus.

Coffee, who struggled with shyness and depression during her childhood, described that bus ride as inspiring.

The smiling student sitting beside her gave her the boost of confidence she needed to approach others and begin to socialize with other students.According to research conducted by the IU Southeast Shyness Institute, Coffee is not alone in her reticence. The Shyness Institute gathers information on shyness and receives hundreds of letters from around the globe asking for help in overcoming shy behavior.

Bernardo Carducci, psychology professor and director of the Shyness Research Institute, says his research shows 45 percent of people describe themselves as experiencing some degree of shyness.

“The number one issue we get from shy people, particularly young shy people, involves meeting others. How do I make friends?” Carducci said.

Carducci said making new friends can be difficult to do on a college campus because it is a new environment with new people.The Shyness Institute offers information to help people with the process of meeting new people in an unfamiliar setting.

One technique both Carducci and Coffee recommend to overcome shyness is becoming involved in an organization on campus. Coffee is a member of the Sigma Kappa sorority and regularly attends Greek Life events.

“They are one of my support groups,” Coffee said. “We all support each other so much. It’s a really good feeling to know that you’re truly accepted by a group of people.”

Carducci said that attending social events can be a great way to meet people and network friends if done correctly. When dealing with a shy personality, there is a warm up effect, and shy people take longer to warm up to others than an outgoing person does.

This is why Carducci said he suggests showing up to events early, so a shy person can begin meeting people and warming up to the event.

Carducci said he discourages shy people from showing up late to events. He said it is easier to start a one-on-one conversation, than to join in a group conversation.

Jessica Price, psychology senior, says that the best way to work on your shyness is through practice. She joined Sigma Kappa after coming to IU Southeast and believes that it helped her overcome her social anxiety.

After the first semester of school, she said she began to look forward to social events and sorority gatherings.

“When I joined a sorority things got better and easier because I talked to more people and they wanted to get to know me more,” Price said.

Coffee explained how she dealt with starting conversations with her classmates. She said it was important that she forced herself out of her comfort zone and talked to different people every day.

“I made a conscious effort to talk to everyone in my classes,” Coffee said. “I realized how much I enjoyed being around others and how much energy I got from conversation. I never tried to talk to people before.”

According to Carducci, shyness is becoming a more common trait and one of the main reasons why is because of technology and what he called ‘an era of instant gratification.’

Carducci said a person can go on the Internet or social media and find whatever they please in a matter of seconds whereas developing a relationship takes time.

Another contributing factor is what Carducci calls “identity intensity.” He said people are competing for attention online and feel like they need to be louder and more interesting to stand out. This example can be found in pop culture as well, especially in movies as they are becoming more violent and extravagant because the cultural norm is shifting.

Carducci said this intensity can deter shy people from engaging in conversation because of the warm-up effect. He said people aren’t ready to voice their opinions and engage in that vocal a setting.

Carducci describes himself as being successfully shy. When he was in high school, he found it difficult to talk to girls.After reading an article on shyness, Carducci began to implement some of the tips that were given and said that it inspired him to begin research into shy behavior. His goal is to help people become successfully shy.

Carducci said he encourages those who struggle with shyness to reach out to the Shyness Institute. Its office is on campus on the second floor of Crestview Hall.