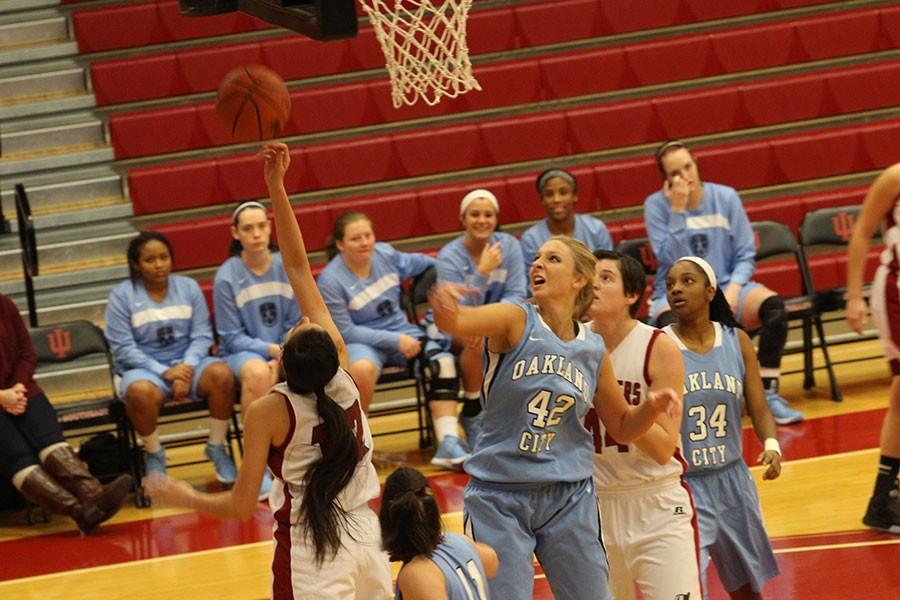 Senior forward Mary Dye and junior Jocelyn Mousty attempt to rebound the ball after a Mighty Oaks miss. The Grenadiers would go on to lose by 13.

The IUS`s women`s basketball team fell to the visiting Oakland City Mighty Oaks in a score of 54-67 on Tuesday, January, 2016.

According to the stats sheet, the Grenadiers were in a shooting slump the whole night. Turnovers were a big issue coming to half time.

The Grenadiers trailed to the Mighty Oaks 24-25 at halftime.

The first half for the Grenadiers wasn’t the best shooting percentage, only shooting 29 percent. They also had 7 turnovers and only five assists.

Freshman guard Annie Thomas would lead the team in scoring with 10 points at halftime. Junior forward Jocelyn Mousty also had six points and led the team in rebounds with 11.

“We weren’t moving the ball really well and they were running a zone defense the entire time,” Assistant Coach Brian Sullivan said. “It wasn’t a function of the shooting so much as the offense leading into it didn’t put us into a good position to take good shots.”

The fourth quarter wasn’t strong for the Grenadiers either. The Mighty Oaks took off with an 11-0 run as they would finish the game winning by .

Thomas had a game high 22 points. Mousty would have a double-double with 16 points and lead the whole game with 16 rebounds.

The Grenadiers were in a shooting slump shooting the whole night, only shooting a total of 30 percent from the field.

“Making the smart pass and thinking where the pass goes and have a mission where the ball will go to lessen the ball turnovers,” junior forward Tori Kingsley said.

Sullivan also said that they had too many turnovers. The Grenadiers finished with 19 turnovers, which lead the other team to score 14 points off them.

“We had a bad shooting day in general,” Kingsley said. “I don’t think we have shot that bad in a long time.”

Kingsley said that getting back in the gym and getting some good practice time would be beneficial as the season continues.

The Mighty Oaks bench provided a boost with scoring 25 points off the bench. Sullivan said that this was a big outlier.

The Grenadiers are back in action on the 14th when they play IU Kokomo at home, right before the men’s game.