Grenadiers come up short against Cougars 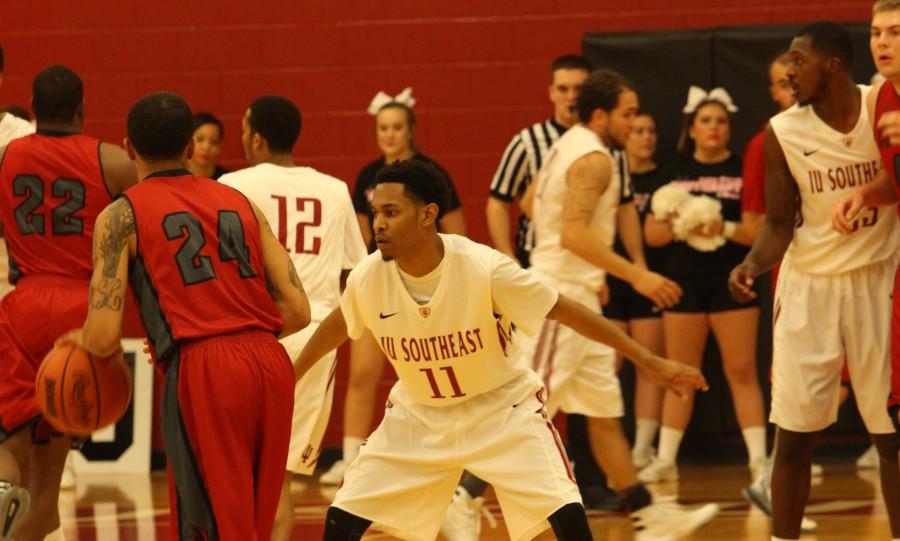 Sophomore guard Devon White sets up in his defensive stance.

The IU southeast men’s basketball team lost to the IU Kokomo Cougars Thursday night, Jan. 14th, by the score of 69-59.

The Grenadiers needed this win because this IU Kokomo team is last in the KIAC. Because of their record in the conference, The Cougars also came to play.

However, it was a slow at the start for the IU Southeast men’s basketball team, as they began the game with a technical foul against themselves.

Ten minutes before the game began, the IU Southeast men’s basketball team didn’t have their starting roster updated for announcer and score-keepers.

“It wasn’t about what Kokomo did to us, just what we did to ourselves,” said sophomore point guard Demetrius Stanton, “We just couldn’t find a rhythm.”

Because of poor shooting, the Grenadiers fell short against the Cougars and ended up finishing the game losing by ten points.

On the other side, the Cougars shot 35 percent from the field and 25 percent of their 3 pointers, giving the cougars the advantage they needed over the Grenadiers.

In the second half IU Southeast gradually improved their field goal percentage by 14 points (from 24% to 38%)but not enough to bring out the win.

Freshman forward Robert Sawyer had a double-double, with 13 points and 10 rebounds against the Cougars.

Freshman guard Myles Harvey also scored in double digits. Harvey had 12 points against the Cougars. Harvey said that from this game, the Grenadiers have to improve on everything from team communication to rebounding.

“From this game, we can improve on everything,” Harvey said. “ From rebounding to team-talking. Anything you can think of we gotta do to get better at.”

As an individual, Harvey says that he too also has a lot of room for growth.

“My defense because that’s what’s really letting the team down,’ Harvey said. “I need to get in the gym to shoot more because I couldn’t land a shot for my team, and make better decisions when I’m out there on the court.”

“ I need to focus on making shots, being a leader and making the right decisions at the right time,” Smith said.

Smith said that one big reason they lost is because of the turnovers. He said that as a team they need to do a better job of making better decisions during the game.

From the slow start, poor shooting, and miscommunication on the court, the IU Southeast Grenadiers lost to the Kokomo Cougars 69-59.