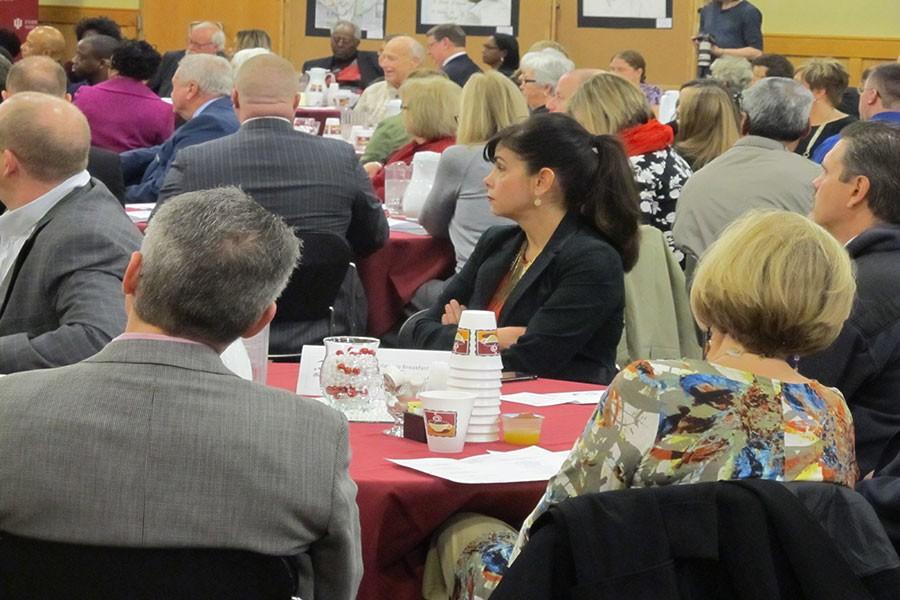 Groups of people joined together for the King Scholarship Breakfast and Panel Discussion on Saturday, Jan. 16 in the Hoosier Room in University Center North to donate to and support the scholarship efforts, as well as discuss issues of racism.

On the weekend before Martin Luther King Jr. Day, groups listened to experts speak about the legacy of a man that helped pave the way for African American citizens in our country.

More than 100 alumni, community members and local government officials attended the 2016 King Scholarship Breakfast and Panel Discussion at 9 a.m. on Saturday, Jan. 16 in the Hoosier Room in University Center North. The King Breakfast is an annual event that allows people to donate money that will be given out in the form of scholarships to Clark County students.

Jeffersonville mayor Mike Moore, Paul Fetter of the Clark County Town Council, Clark County sheriff Jamey Noel and a representative of Sen. Joe Donnelly, who could not attend the event himself, were in attendance.

The breakfast started with a speech by Chancellor Ray Wallace, where he thanked those who came out that morning to be a part of the event.  Afterward, attendees got food and ate at their seats.

When everyone was seated and had their food, the panel portion of the breakfast began. Many experts talked about their different opinions on racial equality, using topics such as drugs, race relations and education to steer their discussion.

This year’s King Breakfast was the first at IU Southeast. Wallace said he wanted to bring the breakfast to campus so that more scholarships could ultimately be awarded.

“I thought we should have these folks on campus so they can save money to go toward scholarships,” Wallace said.

Others, like Janice Leavell, spoke about how Monday would be the 32nd time that Leavell and others have celebrated Martin Luther King Jr. She also said students have received the King Scholarship since 1988.

Leavell said the King Breakfast is important because it shows students what King fought for to get them involved in art and education.

IUS students, faculty, staff and community members will celebrate King’s legacy throughout the week. See the IU Southeast MLK Events page for information about other Martin Luther King Jr. activities that will occur between Monday, Jan. 18 and Thursday, Jan. 21.