Author of “Buddhism for Dudes” comes to IU Southeast 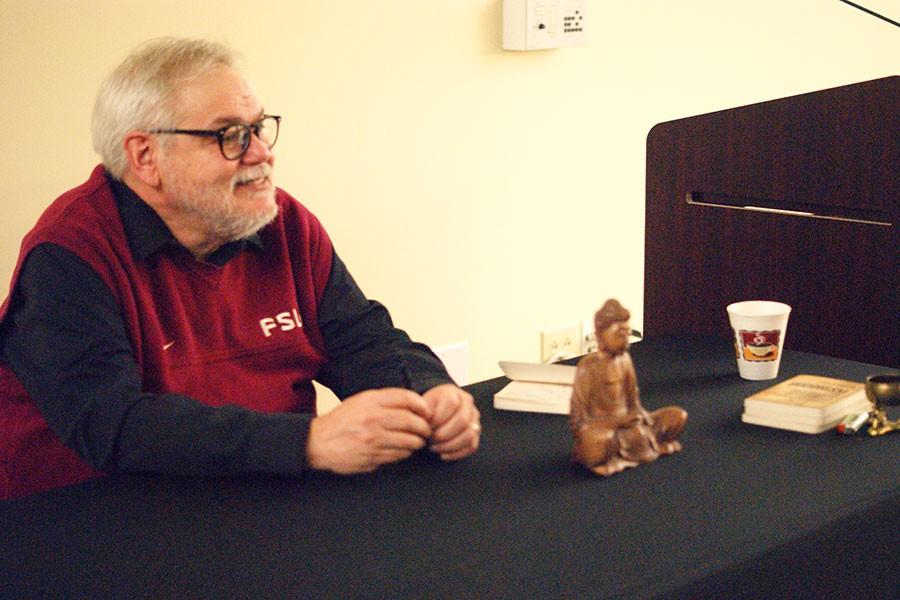 Gerry Stribling, author of "Buddhism for Dudes: A Jarhead's Field Guide to Mindfulness," discusses his view of Buddhism and how it relates to men.

Living a compassionate life is the key to happiness, according to Gerry Stribling, author of the book “Buddhism for Dudes: A Jarhead’s Field Guide to Mindfulness.”

Stribling, a 64-year-old former Marine, discussed his book and his take on Buddhism on Thursday, Jan. 28 from 7 to 8 p.m. in the reading gallery on the third floor of the IUS Library.

“Buddhism for Dudes,” published by Wisdom Publications, is Stribling’s first book, but he said he has been writing for magazines for over 40 years.

Stribling said he has led a vast and interesting life over the years. He said he spent two years in the Marines, he taught children overseas and he spent 20 years as a social worker.

Stribling said he first published “Buddhism for Dudes” on Amazon Kindle in 2011, and he has received many letters from soldiers serving overseas since then.

Stribling said he wrote his book so anyone can understand the concepts of Buddhism.

Although the book is primarily geared toward men, Stribling said there are plenty of women who have read his book and found it helpful.

“It is written in very plain English, there is humor to it, and I’ve stripped away all the metaphysics to concentrate on the important stuff, the dharma,” Stribling said. “I tried to demystify it for people.”

Although Stribling said he teaches the principles of Buddhism – based on logic and reason – he is not trying to sell Buddhism.

“I am not trying to make Buddhists,” Stribling said. “That is the farthest thing from our minds. We don’t want to convert anyone to anything.”

Buddhism is not a religion, but it is a set of principles that a person can live by in order to be happy in life, Stribling said.

Stribling said he follows Theravada Buddhism, also known as the “way of the elders.” He said Theravada Buddhists are the keepers of the Pali Canon, some of the oldest Buddhist texts. Theravada is the main form of Buddhism practiced in Sri Lanka and Southeast Asia.

Stribling said he found himself in Sri Lanka shortly after Sept. 11, 2001. In Sri Lanka, Stribling said he was reaffirmed in his Buddhist beliefs in the monasteries, and gained the knowledge he used to write “Buddhism for Dudes.”

“People think Buddhism is a self-help program, and it is,” Stribling said. “It gives you powerful insight into your own mind and into your motivations and understanding the motivations of other people.”

Courtney Block, assistant librarian, said she wants to hold more events and bring in more local authors to speak during lunchtime, from noon to 1 p.m. She said she hopes this would attract students and community members who would otherwise be having lunch.

Stribling teaches every Sunday at 5 p.m. at the Kentucky Meditation Compassionate Peace Center at 4849 Southside Drive in Louisville. He also writes for a blog titled “Buddhism for Tough Guys.”

Note: This story was modified Monday, Feb. 1, 2016, because Courtney Block was misquoted. The Horizon apologizes for the error.