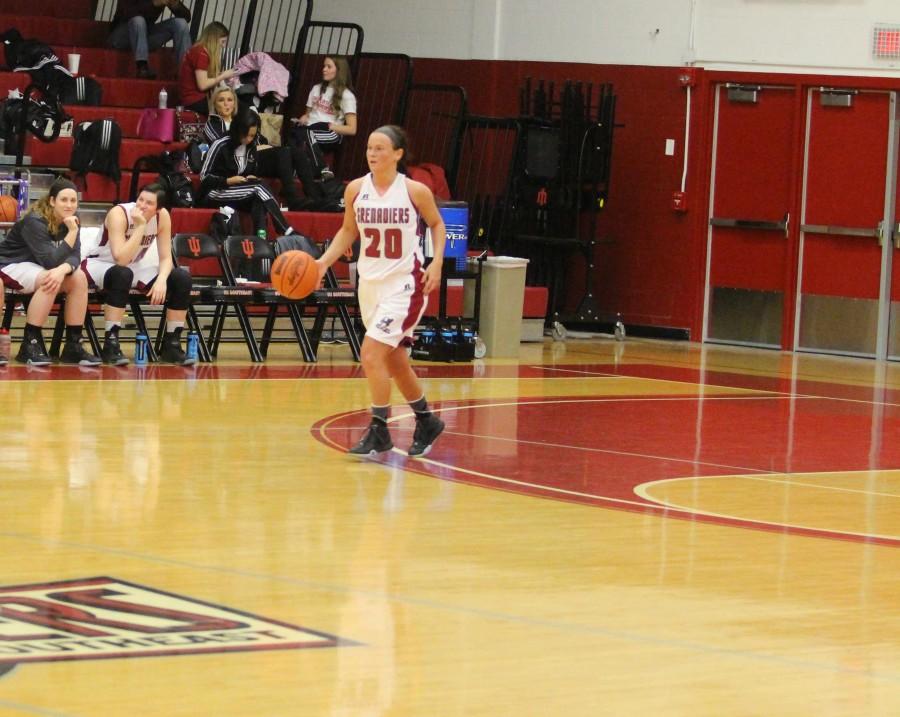 Sophomore guard Annie Thomas bring the ball up the court. The Grenadiers would go on the win by the score of 78-55.

On Jan. 30, 2016, the IU Southeast Women’s Basketball Team defeated Alice Lloyd by a score of 78-55, extending their winning streak to three.

The Grenadiers were led by sophomore guard Annie Thomas with 22 points and six assists and senior forward Mary Dye added an additional 19 points and 12 rebounds in the win.

The Lady Grenadiers shot 40 percent from the floor including 43 percent from behind the 3 point line, while holding Alice Lloyd to 32 percent shooting.

IU Southeast started the game on a 12-1 run to open the game and never trailed for the rest of the game. The Grenadiers were ahead by double digits for the remainder of the game.

“We came out knowing it was a big game, we knew they had just beat Brescia and we knew we had to come out and be ready to play,” Thomas said.

Thomas said that their defense caused disruption for Alice Lloyd all game long.

Thomas came out aggressive from the opening tip and really set the tone for the Lady Grenadiers. She scored 15 points in the first quarter including two 3 point baskets.

Junior forward Jocelyn Mousty and Dye were both aggressive on the boards, grabbing offensive rebounds and not giving Alice Lloyd any second chance points, which Head Coach Robin Farris said could easily get teams back into games.

Early in the second quarter, Mousty has to sit on the bench because she picked up her third foul.

Farris was more than satisfied with their effort saying that both girls played very well.

In the beginning of the third quarter, Alice Lloyd scored five straight points bringing the game within 10. However, that was shortly stopped after Thomas got a steal on the baseline leading to a fast break where Thomas passed to Dye for an easy layup.

The momentum was surely in the Grenadier’s favor.

According to Farris, having a point guard that plays hard and that is very talented really makes the team better. He sees that in Thomas.

“She’s plays hard, she plays with a purpose and she has a huge heart,” Farris said, “That’s what you want, she’s scoring and she’s reduced her turnovers. She had six assists as opposed to two turnovers in 31 minutes. You can’t ask for a better game than that.”

Over their last three games, IU Southeast have allowed an average of 50.75 points per game. Farris credits communication to the key to the Grenadier’s improvement on defense.

“I hear them talking a little more and I believe that has a lot to do with it. They seem to be more in tune and wanting to defend and understanding we need it to win.” Said Farris.

Despite the win Coach Farris as any coach would say there is still room to improve.

“We need Jocelyn not to get into foul trouble. In our last 3 games she’s been in foul trouble and she’s too important to have on the bench. We need her on the floor.”

The Grenadiers improve their record to 10-9 on the season and record of 7-3 in the KIAC. This win moves them up to the fourth seed overall in the KIAC.

Next up for IU Southeast is a 5 p.m. match up at IU Kokomo on Tuesday, February 2.