More locks may be installed by mid-March 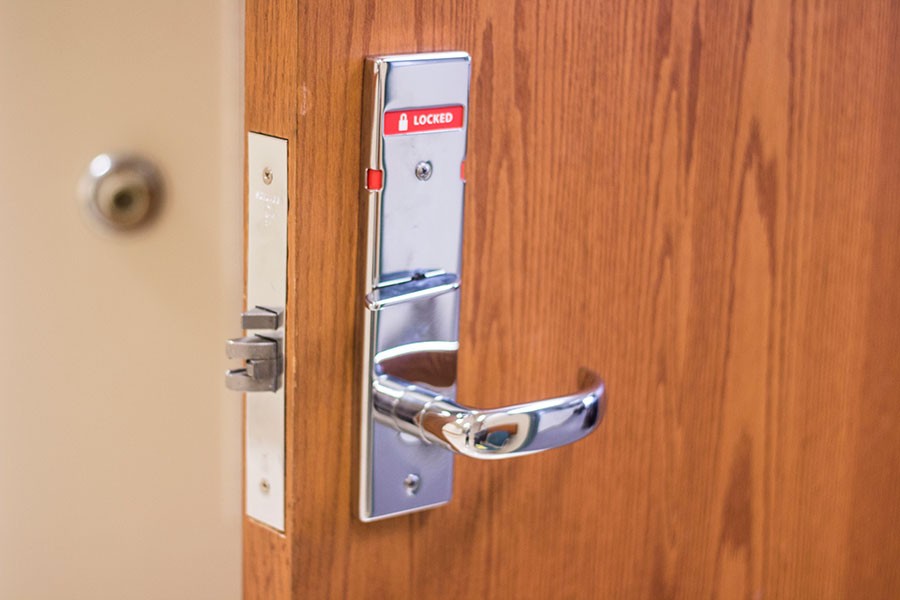 The door of Knobview Hall, room 207, is one of many doors in Knobview that have had new thumb locks installed.

Any time a lockdown happens to occur on campus, the IU Notify emergency alert system allows students, faculty and staff to receive text, call and e-mail alerts regarding the lockdown and appropriate safety procedures, according to the IU Notify sign-up webpage. Staying locked and hidden in classrooms are among the instructions IU Notify gives during a lockdown.

Despite these instructions, during IU Southeast’s most recent lockdown on Sept. 11, 2014 and during the lockdown that occurred in December 2013, students, faculty and staff found that most doors on campus did not lock from the inside. They expressed their concerns, according to a story from The Horizon that was published about a year after the lockdown.

In response, thumb locks have been installed on classroom doors in Knobview Hall and the Ogle Center, as well as the doors of the conference rooms in University Center North, Rob Poff, director of the Physical Plant, said. Poff said workers from the University Architect’s Office in IU Bloomington installed the locks in November and early December 2015, and the Physical Plant supervised the installation.

Charles Edelen, chief of police, said concerns were brought to IUS Police before the locks were chosen to be installed.

“Once we got that feedback, we looked into it and we realized that was something that could be improved, and we moved to address it,” Edelen said.

Poff said the new locks consist of a thumb latch on the inside of each of the doors. He also said each new lock has an indicator switch that can be flipped to show on the outside if the room is locked or unlocked.

“From outside, the hardware operates the same as it normally does, but on the inside, it’s like an indicator where in an emergency you can decide whether or not to lock the door down,” Poff said.

Sarah Knoy, psychology junior, said she was on campus the last two times IU Southeast has been locked down due to a possible gunman being on campus. She said she spent both lockdowns in a classroom where the doors did not lock.

Knoy expressed skepticism over whether the locks will be effective.

“I think [the locks] are a false sense of security, but if it makes students feel better then it’s positive,” Knoy said.

Poff said locks still need to be installed in Hillside Hall, Crestview Hall, the Life Science building and the Physical Science building. He said he hopes the installation will occur by mid-March.

“There were some retrospect issues, and we’re waiting on parts to come in so we can go ahead and finish the job,” Poff said.

Edelen said the project will allow all classrooms on campus to be secured when the project is completed. He also said the project has been a big financial commitment for IU Southeast so far, partly because some doors had to be redone to get their new locks in place.

“It was a much bigger project than I think anybody really imagined when we started it, or when it was first discussed,” Edelen said. “It shows a commitment by the university to provide a safe environment for students and the faculty, and to be able to actually secure their classroom and hopefully prevent any person wishing ill will from gaining entry. That’s the whole idea is to be able to secure the classroom and keep someone wanting to do bad out.”

Poff said about 315 thumb locks will be in place on doors around the IUS campus when the project is completed, and he said the locks will make campus more secure.

“If we have an emergency, it just gives us another tool to try to protect ourselves,” he said.

Edelen said while the new locks will add a security measure, it’s important for students to have a plan for lockdowns or other emergency situations anywhere, not just on campus.

“If you’ve given it just a couple of minutes thought and you have somewhat of a plan, you are miles ahead of anybody sitting around you, as far as survivability,” Edelen said. “Because people who haven’t put any thought into it have to immediately go to panic, because they don’t know what to do. But if you’ve given it some thought and have a plan, then you’ll skip that panic phase and you’ll go right into putting a plan in. So what I try to impress people with is just a minute or two thought when you’re in a new location. ‘Here’s what I would do.’ I think that will really help if something ever happens, God forbid. If anything ever really happens, if you just give it a minute or two thought, that will pay off.”