IUS students and staff share the differences between what they dreamed about as kids and what adult life has become. 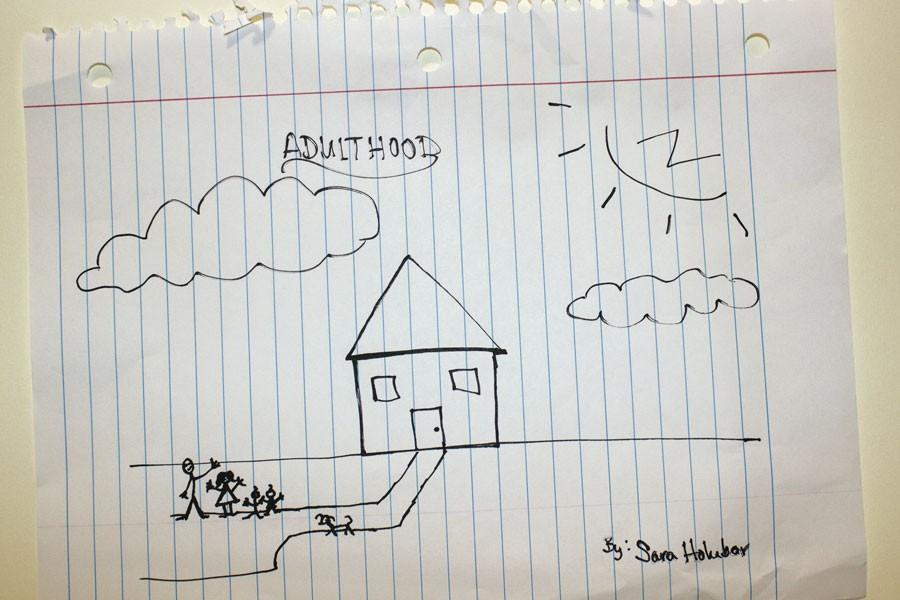 Sara Holubar, Spanish and English writing senior, said that as a child she really wanted to be a mom and have the ability to make her own decisions. Picture drawn by Holubar.

Buying a house and having a family ends up being more complex than a childhood wish.

Children fantasize over what their adult life will be like.  They dream about what occupation they want, how many cars they will have and how big their house and family will be.

When children become adults they realize attaining these things are not as easy as it appeared. IU Southeast students and a faculty member shared how they pictured adulthood as a child versus how they see it as an adult.

When Brooke Wessel, art history junior, was a child she wanted to be an artist. She has followed her dream and is currently going to IU Southeast for an art degree. Even though she is following her passion she admits that it is harder than what she imagined as a child.

“I feel like from a child’s perspective you have a house, your parents have jobs and they make it look so easy,” Wessel said.  “But it is not, it is a lot harder than I thought.”

Jennifer Palmer, adjunct instructor of fine arts, thought that adulthood would be much easier.  As a child Palmer’s mother was diagnosed with cancer and passed away when Palmer was in her thirties.

“It has been a hard battle,” Palmer said. “I did not think my mom would have cancer and that I would have to care for someone at such a young age.”

Tanner Cole, marketing junior, views adulthood the same as he did as a child. “Adulthood is terrifying at times and you are always adventuring out into the unknown,” Cole said.

When Sara Holubar, Spanish and English writing senior, was a child she strived to become an adult and make her own decisions.

“I always wanted to be an adult until I became an adult,” Holubar said.

David Jessee, Creative writing senior, said he thought by the age of 25 he would have three kids, a nice house and be married. “I always wanted to be a father,” Jessee said.

As an adult Jessee feels differently about this.

“I don’t know what the hell happened, but I don’t want that anymore,” Jessee said.

Kacey Slone, painting and graphic arts senior, said that when she was a child she wanted to be a teacher and have everything figured out by the time she became an adult. “I thought by now I would be in my career,” Slone said.

Claire Faith, psychology junior, said she pictured that as an adult you received whatever you wanted.

“As a kid you imagine everything to be easy and simple but there is all this complicated stuff you didn’t know about,” Faith said.

Growing up, Wessel thought that if she were a good person she would have money.

“As a child I could not imagine how much student debt I am going to be in, as a child you do not think about money that way,” Wessel said.

From a young age, Cole said he knew money was difficult to get and he always had trouble saving money. When he had money he was always ready to spend it. “I got 20 bucks, what can I do with it? Go buy a cheeseburger and see where the night goes,” Cole said.

Palmer shared a similar view with Cole except she tends to save her money.

“I viewed money as something hard to get and you hold onto it and spend it on things you really want,” Palmer said.

Jessee said he thought a nice house, three kids and a marriage were going to be easy to attain.

Cole does not think adult life is easy but he said he sees this as a positive thing. “There is nothing truly easy and if it gets to the point where everything is easy you are selling yourself short,” Cole said. “You are not doing everything to meet your potential.”

Each individual struggles with adulthood differently. Slone’s biggest struggle is not attaining money, a car, a house or a family but making decisions.

One decision that Holubar regrets making is taking a brake from college. From this experience she said she learned to “follow your passion, it’s going to be hard, but just do it.”

As a child Palmer looked forward to becoming an adult and now that she is an adult she wishes she had enjoyed her childhood more.

Now that Palmer has experienced adulthood for a while, her words of wisdom are “take it easy, just enjoy every moment, you can’t think about the future because it can be gone.” ■