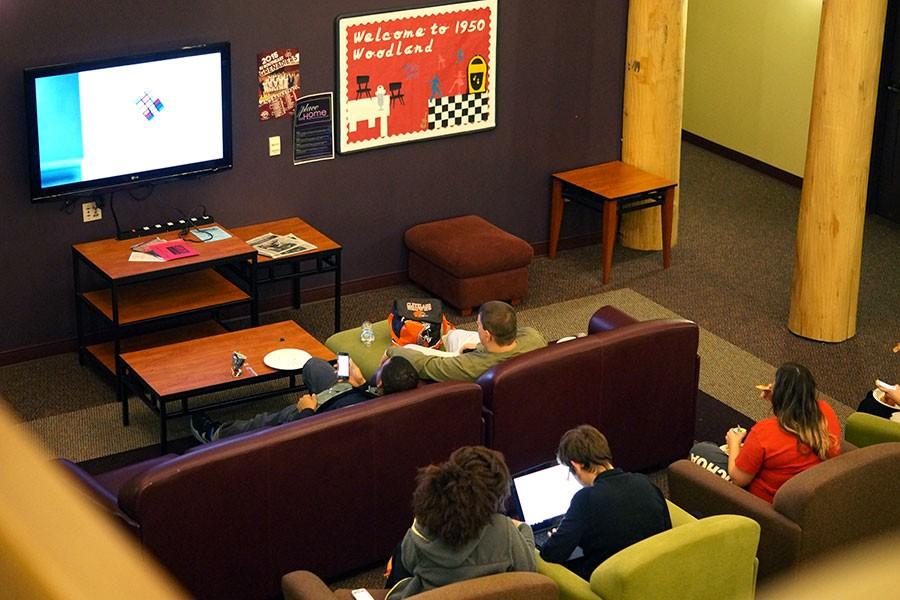 Students gathered around the television to watch Super Bowl 50.

On Feb. 7, 2016, Indiana University Southeast students gathered at both the Orchard and Woodland dorms to celebrate a historical event not before experienced in sports history.

Super Bowl 50 offered an opportunity to come together as a student body with common interests and common rivals.

The Panthers and the Broncos took the field at 6 pm. Throughout the whole season, these two teams offered plenty of passion from both fan bases that attended this viewing party.

On one side, the Broncos’ starting quarterback Peyton Manning, who played most of his NFL career about two hours away from the IUS campus, had his number of loyal fans who wanted to see Manning add another Super Bowl to his already Hall of Fame career, in what may be the final game of his career.

On the other side the Carolina Panthers, led by NFL MVP winning quarterback Cam Newton, added a new school swagger this season with their touchdown dancing and their infamous “dab” dance.

The residential advisor for Woodland lodges, Trent Wallace, was the real MVP of this year’s Super Bowl. He ordered pizza, chicken wings and barbeque for the students. He said it was a tradition for him, so he brought it to the IUS lodges.

“Just seeing everyone happy, seeing everyone appreciate coming together enjoying the food and enjoying the game is always a fun experience,” said Wallace. “A lot of residents here do not care about sports, but the Super Bowl offers the halftime show and the commercials.”

Wallace said that even though students didn’t care about football, they were other enjoyable aspects of the Super Bowl.

“There was something for everyone to watch,” Wallace said.

Being that Peyton Manning played majority of his professional career approximately two hours away from IU Southeast campus, one might think the Broncos would have majority of the fan base attending.

However, this was not the case.

“For Peyton to ride off into the sunset with a Super Bowl loss is what I hope happens,” junior social studies major Caleb Bell said. “I don’t think Denver is a complete team. They’re a defensive oriented team while Carolina has a more complete team.”

Bell was even nice enough to predict the outcome of the game.

Once the game started, students gathered around the flat screen television, whether it was to watch the game, the commercials, or wait around for the halftime show. All students had something to cheer for or root against.

Whether or not the Super Bowl lived up to it’s yearly hype is still up for debate, but Wallace said that everyone enjoyed the game and will all to try to make it a yearly event.

However one thing is for certain. At the end of the night, the students walked away from the Super Bowl party with a little bit of history.

All the students that said they wanted Manning to be beaten in the Super Bowl left unhappy as the Denver Broncos beat the Carolina Panthers by a score of 24-10.