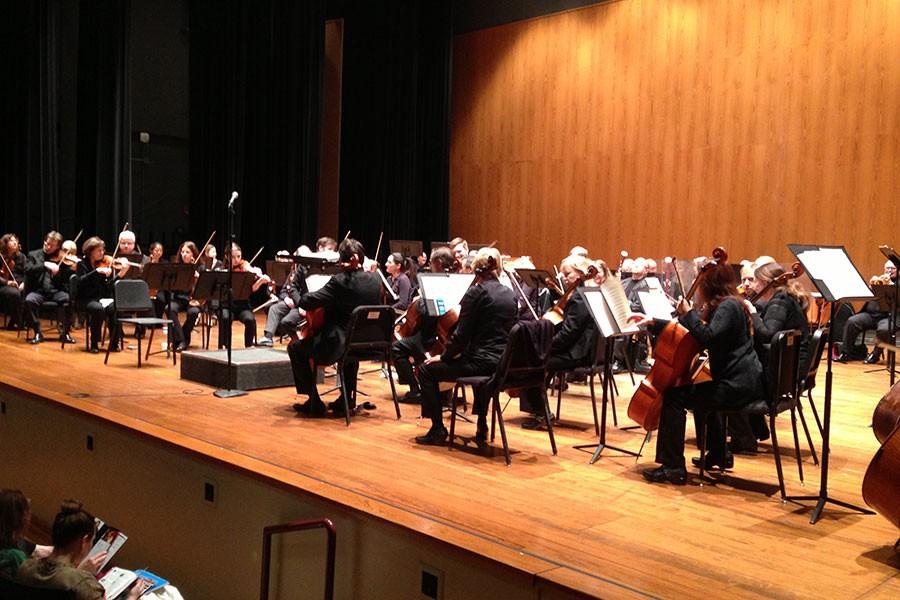 The Louisville Orchestra warms up for its performance.

Abrams said classical music is extremely important to the foundation of Western music as a whole.

“It was during this period where the foundations of western music was established,” Abrams said to the audience. “When I was 14 years old, I got into an argument with my teacher. I called Heiden boring. My teacher, who was 60 years older than I was, tried to explain to me how Heiden was not boring. It took me some time before I realized the truth. Technology and the things around us change. However, what Heiden wrote his music about does not. Heiden was not boring. It was how other people played Heiden’s work.”

Abrams said he has been involved in music since he was 3 years old.

“When I saw my first orchestra when I was 9 years old, I knew I always wanted to be a conductor,” he said.

David Hemmett said he and his wife, Carole, were looking forward to the concert, and they have been season ticket holders for Louisville Orchestra performances for some time.

“We have been coming to IUS to see them perform for several years now,” Hemmett said.

James Mueller said his son Jonathan is in the Louisville Orchestra.

“He has been performing for maybe five to six years,” Mueller said. “This is the first time I will be seeing him perform in the Ogle Center.”

IUS faculty were also present at the performance.

Subhranil De, associate professor of physics, said he was impressed with many of the lesser known works, including Bocherini’s “Sinfonia” and Beethoven’s “German Dances.”

“I really loved the Bocherini’s ‘Sinfonia,’” De said. “It was really quirky and fun. And what amazes me about Beethoven was that, although he was known for his thunderous movements, his slow movements were also sublimely beautiful.”

“We split the profits with the Louisville Orchestra,” Bierman said.

Abrams said the unique relationship the Ogle Center has with the Louisville Orchestra allows such performances to occur.

“We have a really great relationship with the Ogle Center,” Abrams said. “We play from the east quadrant to the west quadrant of New Albany. This is our main New Albany area. The facility has great acoustics.”

Before the performance, Abrams said he was honored patrons came to see the Louisville Orchestra perform.

“We hope that by coming here to them we make it a special experience for them,” Abrams said.