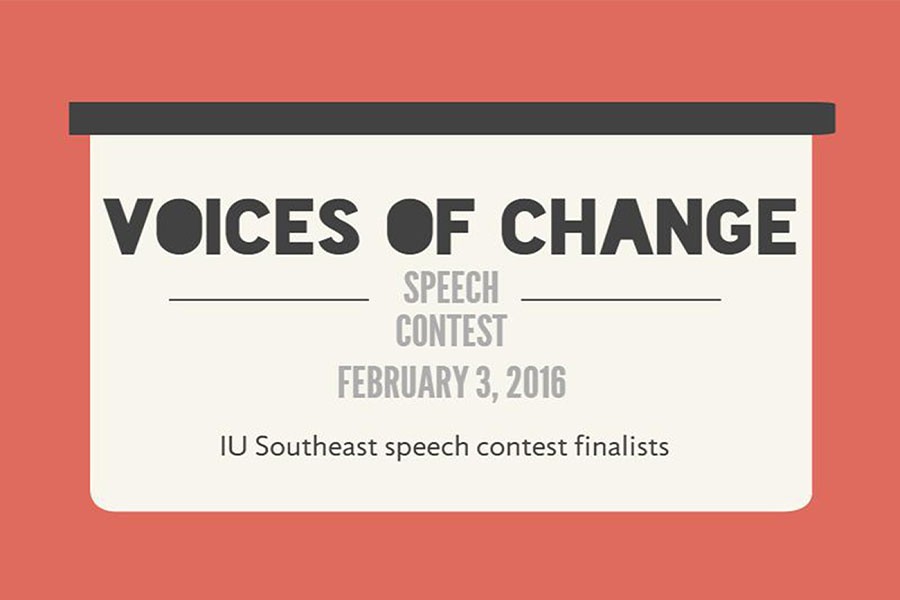 Four students sat in the front row of University Center North, room 127. The students clenched their note cards while practicing for the last time what they were going to say in front of their audience.

Then, Diane Reid, senior lecturer in communication studies, stood in the center of the room and announced to the audience that the finalist round of the Voices of Change Speech Contest was about to begin.

IU Southeast held the finalist round of the fourth annual Voices of Change Speech Contest on Wednesday, Feb. 3 from 7 to 9 p.m.

Reid said the purposes of the contest were to have students promote social change through peaceful persuasion and to honor Martin Luther King Jr.’s legacy.

Bieker first explained the barriers of mental health awareness. She said negative stigma and cost are two of the main barriers.

“People avoid counseling because they are afraid to be judged,” Bieker said.

Also, Bieker said one third of those who have a mental health issue will seek treatment.

Bieker said mental health education needs to be added at schools to help satisfy the need for awareness. She also said nonprofits could spread awareness about mental health and that IUS students could visit Personal Counseling Services on campus.

Sami Davis, psychology freshman, was the second place finalist of the speech contest.

Davis said she wants to end beagle product testing so kids can have a “Snoopy” in their lives. She said beagles are tested on because they can easily be put in kennels, they are low maintenance, they are very trusting and they require less grooming. She also said they just have to be fed.

Also, Davis said that after beagles are tested on, they’re kept in kennels and put into retirement, and they are later euthanized. She also said newborn beagles can only stay with their mother for four weeks, and scientists begin testing on them afterward.

Sewell said it is difficult to provide funding for students who are ELLs, because they are a rapidly growing demographic and they don’t develop academic problems. She also said ELL students are bullied and are living on the poverty line.

Sewell said although Title 3 of the 2001 No Child Left Behind Act has provided programs like English as a Second Language and bilingual education, ELLs are still having a hard time learning the English language. She said they are put in the position of choosing to sink or swim.

Also, Sewell said people could help ELLs by tutoring them, by donating money to schools and nonprofit organizations, and by making their opinions known.

Sewell said if this is not done, it could cause anxiety and poverty among ELLs, and future students could lose potential and opportunity.

Kendra Stevens, secondary education sophomore, said it’s important to start a 401k early to be able to retire early and live off of the funds.

Stevens said people who don’t have 401k’s may still have to work otherwise.

Nick Cappola, criminal justice junior, attended the contest. Cappola said he thought everybody did a good job and the finalists were well prepared.

Tara Miller, business junior, also attended. Miller said the contest was a lot better than what she expected, because the speeches the finalists shared helped open her mind.

“I thought it was going to be more about Martin Luther King, but the speeches were amazing,” Miller said.