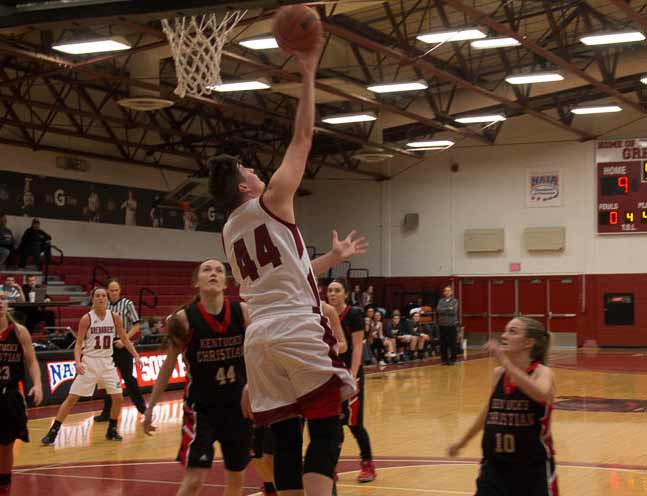 Junior forward Jocelyn Mousty lays up the ball early in the game. She finished with 18 points and 12 rebounds.

The IUS`s women’s basketball team lost to Kentucky Christian University (KCU) in overtime by a score of 86-79 on Tuesday night February, 16, 2016.

During the course of the game, there were 14 ties and the lead changed 14 time throughout the game.

The Grenadiers were led in scoring by Dye. She had a career high 30 points, a personal record that she broke from this year when she scored 27 at Oakland City earlier in the season. To go along with her 30 points, she also shot 77 percent from the field and had 12 rebounds.

“It felt like no one could guard me,” Dye said. “It didn’t matter who they had guarding me, I was able to score.”

Senior guard Katie Slavey scored double digits off the bench with 13 points off of 44 percent shooting from the field. She also sunk four of her eight 3-point shots. Slavey also had two assists and a steal.

Although the offense was clicking, Dye said the defense was not up to par. She said there were too many miscues on defense and they let Kentucky Christian shoot a high percentage.

“We didn’t have too many turnovers and we shot the ball well,” head coach Robin Farris said. “But we didn’t defend the 3 well.”

The game was close in the first half with both teams trading baskets. Kentucky Christian led 32-29 at halftime after a KCU guard hit a buzzer beater off a Grenadier turnover at the end of the half.

The Grenadiers were shot 40 percent in the first half, but KCU was shot just a little better at 43.8 percent.

As far as scoring goes, the second half was the same as the first. The Grenadiers were scoring but they allowed KCU to hit four shots from behind the arc in the third quarter alone.

In the fourth quarter, the Grenadiers led the game 67-65 with about a minute and a half to go. Dye was sent to the free throw line to extend the lead. However, she missed both.

After KCU tied the game up at 67, Dye was sent yet again to the line. Dye put her team up by one, but with 46 seconds left in the game, KCU hit another 3-point basket to regain the lead by two, 68-70.

With 17 seconds left in the game, red-shirt freshman guard Josie Hockman made a layup. After the bucket, the Grenadiers got a little help from Mousty as she blocked the driving KCU guard to send the game to overtime.

With the tournament right around the corner, Dye said that there is a sense of revenge for this season’s tournament after getting bounced out in the first round last year.

“The goal is always to do better than the previous seasons,” Dye said.

After last weekends road trip, the Grenadiers clinched the third spot in their division, guaranteeing them that chance of revenge.

IU Southeast is back in action when they host Point Park University on Friday at 6 p.m. The women’s basketball team will finish up the season at home against Carlow University for senior day and homecoming.