Students learn how to prepare for studying abroad 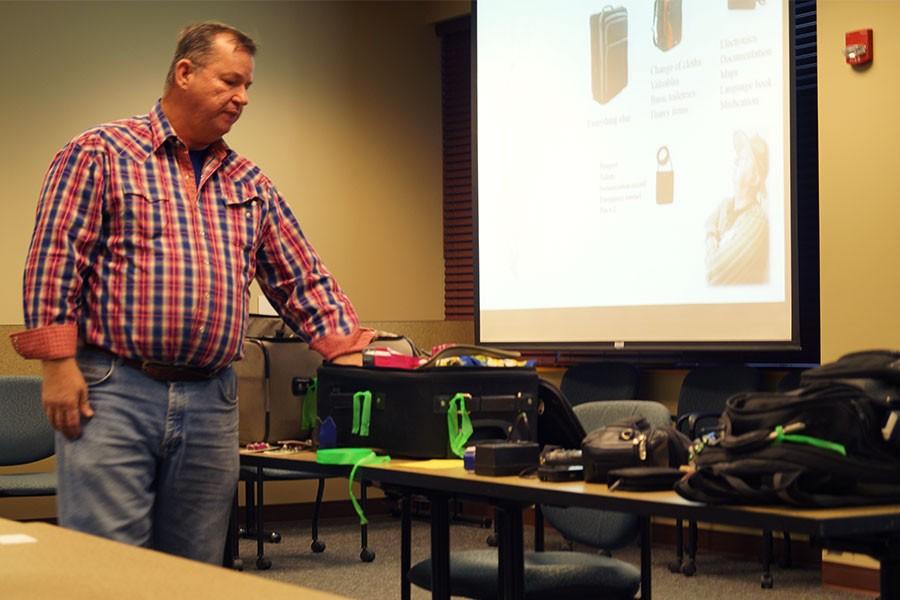 Planning a study-abroad trip involves several steps, but an IUS senior and an IUS alumna recently showed students how to make the process easier.

Brown and Clark said they have traveled abroad on several occasions. Brown, a military veteran who has lived overseas, said he has been on several international trips through IU Southeast, including two trips to China, trips to Costa Rica and Cuba, and five regional field geology trips. Clark said she has traveled to Ecuador, Honduras, Guatemala, Costa Rica, the Dominican Republic, Spain, Brazil and Mexico.

Brown said when it comes to studying abroad, participation is a big part of the process because it is an academic program, not a sightseeing tour. As a result, there are academic requirements, such as keeping a field journal or writing a paper after returning, he said.

Clark said students should enjoy the experience, despite the academic requirements.

“Be spontaneous,” Clark said. “If you have the funds do it now.”

Brown said some of the first things to consider when planning an international trip are  where to go, the method of travel – including flights, cruises and trains – and the budget. He said the size of bags taken on the trip is an important thing to remember when flying internationally.

“You get to travel with a bigger bag and you get to have more bags but if you fly within the country you will be in a smaller aircraft,” he said.

Brown said if airlines check bigger bags, additional fees could be incurred. He said there is a 50-pound weight limit for luggage, so heavier items, electronic devices and medications should be in carry-on bags.

Brown said it’s important for travelers to make sure they know what will be needed for the trip.

Also, Brown said people should leave house and car keys at home when traveling because they will not be needed. However, he said if travelers park at the airport, they could secure spare keys in the frames of their suitcases if needed.

Brown also said it’s important to know how much money is covered in the program costs, because all or some meals may be covered, as well as gratuities. Furthermore, Brown said travelers should know the conversion rates for the country they’re traveling to, and they should make sure credit card companies and banks are aware of the trip, so their cards will not be put on hold.

Brown said most international trips through IU Southeast are inclusive and the cost of tuition, travel, lodging and meals are included in the cost of the program. He said additional meals or souvenirs are not covered.

Additionally, Brown said some countries only take certain forms of traveler’s checks or currency, which can be obtained at a bank before leaving or upon arrival in the country.

Brown also said travelers should keep small bills in a wallet or purse and hide larger amounts of money, so no one will see large amounts of cash being waved around. He said this also helps when bartering, because merchants will be less likely to barter if they see more cash.

Clark said when she went on her first trip through IU Southeast, her phone and wallet were stolen while shopping in a market in Ecuador.

“It was hard for me to get over that for a long time,” Clark said. “But I realized that maybe if I had not presented myself as such a tourist, if I hadn’t had the purse that opens down here you know, I should’ve kept it closer, maybe if I had gone to a session like this it wouldn’t have happened.”

However, Clark said she saw it as a learning experience and she is now more careful, knowledgeable and proactive when traveling. She said her experience shouldn’t deter those wishing to study overseas, but students who do need to be conscious of their safety at all times.

Brown said the professors will attempt to do their best to keep their students safe while abroad.

“The professors are going to do the very best to protect you,” Brown said. “You still have a little bit of responsibility to take care of yourself but they won’t take you anywhere dangerous if they can perceive the dangers.”

Another thing Brown said to consider is that a passport will be required to travel overseas and visas will be needed when traveling to most international destinations. Furthermore, Brown said some countries require an exit visa to leave the country, which will add additional costs.

Brown said some countries also require immunization records, but the Centers for Disease Control and Prevention or the U.S. Department of State websites should have a list of the required and recommended immunizations for each country. Additionally, Brown said copies of other documents, such as trip itineraries, may be needed as well.

Brown said he recommends that travelers get a passport holder in order to carry passports, immunization records, cash and other miscellaneous items, such as bandages or pens. He said the passport holder can be hidden under clothing so that it can be less likely to be stolen.

Clark said she recommends joining the State Department’s Smart Traveler Enrollment Program. She said the program allows members to stay up to date with the areas of the world that are dangerous or are becoming dangerous, and it allows the U.S. government to have a record of where members of the program will be if anything goes wrong when they are overseas.

Brown said students traveling abroad should make sure they tell someone where they will be, as well as leave that person an itinerary and the phone number for IUS Police — 812-941-2400 — in case there is an emergency.

Additionally, Brown said it is important to avoid posting on social media when away, because it allows others to know when someone is away, leaving that person’s home or vehicle vulnerable. He also said he recommends having someone pick up the mail so it does not pile up.

Trevor Allen, political science and history sophomore, said he attended the presentation because he is interested in international travel and he wants to see the world.

“I love the United States, but I would love to see the rest of the world as well,” Allen said. “I have been to Hawaii, California and Kentucky but that’s it.”

Malia Stoner, business senior, said she is interested in all aspects of international travel.

“We’re kind of living in a bubble here sometimes and I think we take that for granted,” Stoner said. “It’s interesting just to even hear about the differences and then hopefully to be able to travel at some point and see those for yourself.”

Stoner said South America would probably be the first place she would visit.

“It seems like a culture that is really interesting to me,” she said. “It’s a very friendly open-arms culture.”

Stoner said she hopes to take a trip abroad in the near future. She said she is graduating soon, and it would be a great graduation present.

“I have traveled quite a bit in the United States and I’ve been to Canada but living on a college budget it kind of makes it a little difficult,” Stoner said.

For IUS students, there are scholarships available that can offset the cost of study-abroad programs, Brown said.

Brown said students interested in studying abroad can contact Lucinda Woodward, assistant professor of psychology and co-director of international programs, or Valerie Scott, senior lecturer in psychology and co-director of international programs. Woodward can be reached at luwoodwa@ius.edu, and Scott can be reached at vbscott@ius.edu.

“Go now, there is no better time to travel than now,” Clark said.