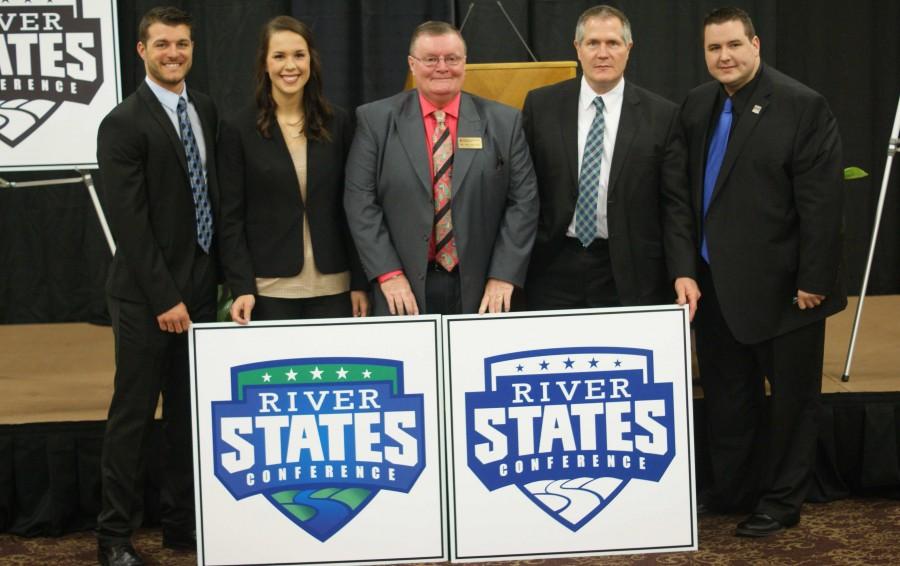 The KIAC changed to the River States Conference.

The conference that IU Southeast plays in changed their name and logo to celebrate the one hundredth year anniversary of the Kentucky Intercollegiate Athletic Conference (KIAC) on Friday, Mar. 4, 2016.

The KIAC has restructured their image. The new name of the KIAC is the River States Conference.

This announcement was streamed live from the Hoosier Room on campus. The news broadcast started at 10 a.m., and it didn’t take much time after that for the IU Southeast Athletic Director and president of the conference Joe Glover to reveal the new logo.

“This is a very big day for the KIAC,” Glover said. “I am very pleased with how things went and will continue to go.”

Glover wasn’t the only one that was present for the big reveal. With a little help from KIAC commissioner Scott McClure, Chancellor Ray Wallace and senior volleyball striker Katie Fischer, the new name and logo were revealed.

According to a media kit, the KIAC is the oldest conference in the National Association of Intercollegiate Athletics (NAIA). It was established in 1916 and this year marks its 100 year anniversary.

Wallace, who was recently appointed to the chair of the KIAC Council of Presidents , also spoke about this change. Wallace said that he is honored to be involved in such a historic conference and in this decision.

“This is an exciting day,” Wallace said. “”It’s a new beginning for what is going to be a very illustrious NAIA conference.”

The conference experienced a change last year by hiring Scott McClure to his first year as commissioner. But this isn’t the first time McClure and the NAIA have crossed paths.

McClure said he has a few goals that he wants to achieve.

“We want to continue to encourage administration to fund their sports programs,” McClure said.

Wallace agreed with McClure, but he said there is one goal that has stayed the same throughout the process of change for the conference.

“The main goal is for the student athletes to graduate and become productive citizens,” Wallace said.

McClure said that it is significant that 2016 was when the change occurred because it is the 100 year anniversary of the conference. He said he was faced with a tough question when appointed as commissioner.

“We had some discussions about holding off on the new name and logo until the end of 2016,” McClure said. “We got a lot of feedback moving forward. While we respect the KIAC, there was a lot of momentum to honor the KIAC, but we also wanted to get things moving forward in terms of representing our 13 schools.”

As for the continued growth of the conference, McClure said there are talks of adding more schools.

“We are looking for opportunities to add more school to the new River States Conference,” McClure said.

One thing McClure stated he didn’t want to happen is the conference adding too many teams and becoming too large, mostly because of how spread out geographically the conference could end up being. He said that being too big would make traveling expenses rise for schools.

However, three teams have been added to the conference in the past two years. With these additions, the conference currently has 13 teams across five states.

The conference added West Virginia Institute of Technology and Ohio Christian at the beginning of the 2015. The conference also added Rio Grande University the year before that. According to McClure, having both public and private schools makes this is diverse very conference.

“The teams we are adding brings more competition to the conference,” McClure said.

As for adding new teams, Glover says that there is a number that he has in mind for this conference.

“Sixteen teams is about all the growth we need,” Glover said. “We are at 13 right now, which gives us challenges because of the odd number. We always entertain applications from schools who want to get involved.”

According to Glover, these changes have been discussed since 2012. In the four years of making this decision, Glover said there were many names floating around the KIAC board members to decide on.

Glover said there were submissions that started in April 2014 from member institutions. 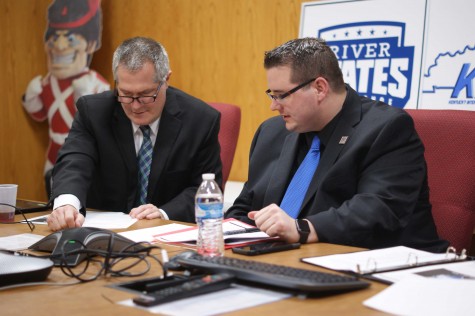 “We had a lot of good submissions,” Glover said. “Once we all got together and met, the Council of Presidents approved the River States Conference in May of 2015.”

Once the name was approved, it was time to put a logo to the name. Glover said there were at least four drafts of the new logo.

“It was a very collaborative process with many people involved and a lot of drafts going back and forth,” Glover said.

Wallace said he, and the Council of Presidents, were quite eager to move forward with the change.

“Everyone was ready for a name that recognized the area of which we operate,” Wallace said. “And it went quite smoothly.”

The River States Conference will make the full transition on July 1, 2016.

“We are still the KIAC,” McClure said. “It will always be our foundation and we are excited for the next 100 years.”