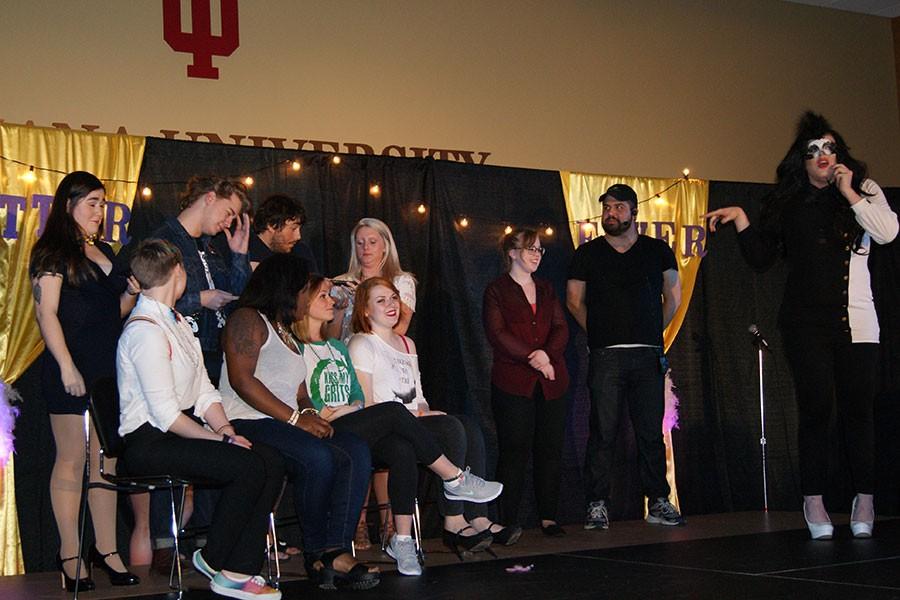 Audience members participate in “60-second Drag Queen,” a competition to see who could so the best drag makeup on their partner in 60 seconds. Kelly Howard, psychology junior and production team member, stage-manager Nicholas Moore, and emcee Lucy Panic led the game.

The annual event took place on Saturday, March 12, in the Hoosier Room in University Center North. Ten drag queens, kings, and faux-queens performed over the two acts that took place. There was also a special appearance by last year’s winner, Uhstel H. Valentine.

Before the official show started, Nicholas Moore, business senior and vice president of the GSA, talked about the history of drag within the LGBT community and drag’s cultural and historical relevance to today.

“A lot of people don’t understand the history and why it mattered to the LGBT community, and why it’s such a source of not just pride, but a way for us to show that even though some people might criticise the fact that I wanna date a dude instead of a girl, the art of drag performance is a vehicle through which we can say we’re OK just the way we are,” Moore said.

Moore  spoke to the audience about the Stonewall Riots of the 1960s and about leaders in the LGBT community, such as politician Harvey Milk, who helped bring LGBT issues to light and started standing up for the community.

“We don’t talk about the history of the LGBT community a lot because it sucks in a way, but the point is tonight, through the art form of drag, we take the hardship and we try turn into something beautiful and something good,” Moore said.

After Moore’s introduction, the mistress of ceremonies, Lucy Panic, started the show. The 10 performers lip-synced and danced to a variety of music, from current pop hits to Disney tunes. The audience members often went up to the stage to tip performers for acts they liked.

Moore said that in drag culture, tipping is customary and encouraged.

After two acts, which included a performance from every contestant, the judges deliberated and winners were announced. Jerry Lee Wyatt, who performed “Be Prepared” from the Lion King and “Never Gonna Give You Up” by Rick Astley, was named best drag king.

“The best part about doing drag is being able to be outgoing because I tend to be a shy person, and when I’m not myself and people don’t know it’s me, I can just do something crazy and be entertaining,” Wyatt said.

Lyrical Love Heart, who performed songs by artist Jess Glynne, was the winner of the faux-queen category.

The final winner of the night was drag queen Emma Octavia Winters, who performed “Circus” by Britney Spears and “I Really Like You” by Carly Rae Jepsen.

According to Roberts and Woodward, the contestants were judged on lip-syncing ability, costumes, audience involvement and makeup.

A panel of eight judges, including students, campus faculty and staff, and representatives from community organizations, judged the performers.

Lucinda Woodward, co-director of international programs and assistant professor of psychology and international studies, said this was her second year on the judging panel and she was very happy to be invited back to judge a second time.

“I got involved because I teach human sexuality on campus, and the GSA comes in and does a wonderful presentation every year,” Woodward said. “I fell in love with what they do and the awareness they build. I guess we built a relationship through that, and they invited me to be a part of it.”

Greg Roberts, GSA founder and academic adviser for the School of Arts and Letters, also said he was excited to be on the panel. Roberts said he has judged every year the GSA has put of the drag show, and he said it a lot of fun to do every year.

The rest of the judging panel was made up of Kimberlyn Beck, a senior double major in occupational safety and communications and Panhellenic president of greek life; Julie Faulds, manager of the IUS Bookstore; Michael Gardner, business junior, GSA treasurer and member of the Derby City Sisters; Aaron Guldenschuh, executive director of AIDS Interfaith Ministries of Kentuckiana; Jay McTyier, IUS registrar and board member of the Louisville Youth Group; and IUS Chancellor Ray Wallace.

Moore said this was the first time an IUS chancellor has participated in judging one of the drag shows. Moore also worked as stage manager for the night’s events, and said this was his fourth year doing so.

Moore said that along with Stephon Camp, theater sophomore, who was his co-chairperson, he handled everything from props to placement and oversaw the design, marketing and production teams.

“The best part about doing this is how it promotes diversity here at the university, and a cultural awareness and understanding,” Moore said. “I love the show and the performance, and the event wouldn’t happen if we didn’t have these performers here, none of which currently are IU Southeast students, they’re from the local community. I enjoy that we invite in community organizations.”

The community organizations involved in this year’s show were the House of Ruth, AIDS Interfaith Ministries of Kentuckiana and the Derby City Sisters. Representatives from the organizations gave short talks about their organizations throughout the night.

Gardner, whose Derby Sister name is Novice Sister Enigma, suggested to the GSA event committee members that they get the Derby City Sisters involved, because he said they’re amazing people.

“The Derby City Sisters is a 21st century group of fun-loving, queer nuns,” Gardner said. “We just run around wherever we are spreading love, joy, peace,  and happiness. We raise funds for other nonprofits, AIDS and HIV research, and safe sex awareness, so we hand out a lot of condoms and a lot of hugs.”

McTyier said he was excited to see the Derby City Sisters involved, because he had a personal connection to the organization.

“I came out of the closet in San Francisco in the ’80s, right after AIDS had crashed on that city,” McTyier said. “It was a horrible time to be there because the Bay Area Reporter, which was the  newspaper, had all these pictures of really handsome men who were dying, and every day is just got thicker and thicker. The progenitor of the Derby City Sisters, The Sisters of Perpetual Indulgence, were formed there and they brought a note of levity and goodwork.”

McTyier said the Sisters of Perpetual Indulgence would often feed the AIDS patients.

“There’s been a long tradition of there being this froclicking good fun, and they were the ones that started white-face, beards, boobs, and boots and they made that all OK,” McTyier said. “It was a different kind of drag that they brought into existence and I’m really proud to be sitting up here with Sister Enigma and all the Derby Sisters.”