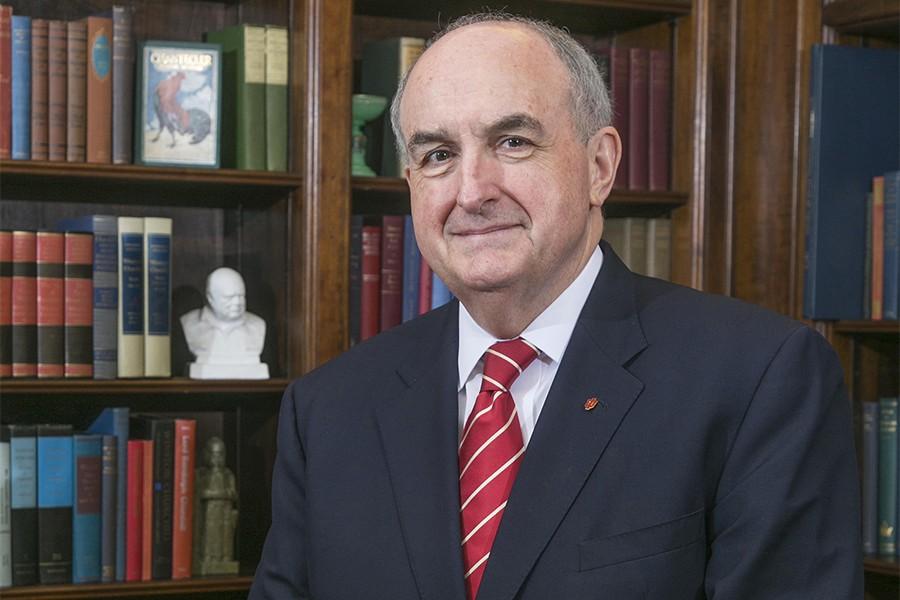 IU President Michael McRobbie stopped at IU Southeast on Wednesday, March 23 as part of his recent journey through the Hoosier state.

McRobbie, who has been visiting regional IU campuses for his “McRobbie on the Move” tour, said the tour’s goal is to highlight the connections the IU system has to the state and demonstrate the commitment to and importance of the regional campuses.

As part of his visit, McRobbie and IUS Chancellor Ray Wallace talked with local media about IU Southeast and its connection to the Southern Indiana region.

“The scale of enterprise going on in this region is pretty impressive,” McRobbie said.

Wallace said IU Southeast has increased applicants for the fall 2016 semester by 22 percent compared to where the campus was at this time for the fall 2015 semester. He said he expects an increase in Kentucky reciprocity enrollment, especially from counties like Oldham County, when construction of the Downtown Crossing and East End Crossing bridges is complete.

During his visit to Southern Indiana, McRobbie toured Samtec, a worldwide manufacturer headquartered in New Albany. The tour was part of an effort by McRobbie and the IU system to reach out to the local employers of each regional campus.

Wallace said since the majority of IUS interns are hired by the companies they intern at, this outreach fosters greater opportunities for students to land high-paying positions.

“Not to be overly mercenary about it, but we want our students to get the jobs that pay the best,” Wallace said. “Jobs where they can put the skills they’ve learned here to work.”

McRobbie said 85 percent of IUS graduates ultimately stay and become employed in the region after graduating.

McRobbie also discussed the efforts that have been made to help students become more conscious of the amount of money they borrow.

McRobbie said the initiatives being worked on include the addition of personal finance education into students’ early college curriculum, as well as a policy of sending letters to students informing them of the amount of financial loan debt they have and what the cost of monthly payments will be.

McRobbie said his goal is to conduct such visits at all of Indiana University’s regional campuses within the 2015-16 academic year. He has already visited IU Northwest in Gary and IU East in Richmond.