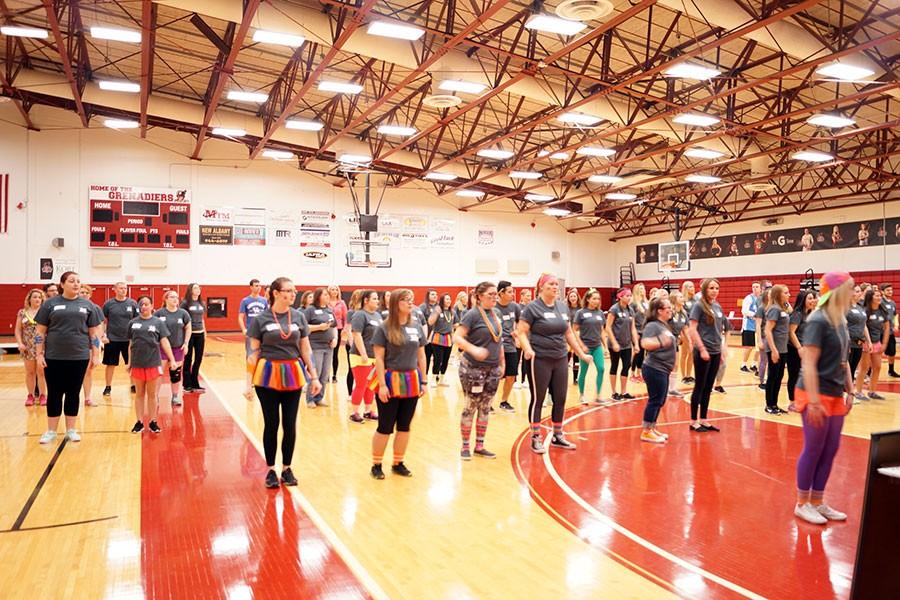 IUS students recently came together for fun, games, dancing and refreshments. The day consisted of dancing, basketball, cornhole and dodge ball. The only rule was that once the event began, participants were instructed not to sit down.

The IUS chapter of Alpha Phi held its first dance marathon in honor of Riley Hospital for Children on Saturday, March 19 from 1 to 9 p.m. in the Activities Building.

According to the Riley Children’s Foundation website, Indiana University held the first dance marathon in 1991 to honor AIDS patient Ryan White, and the concept has now been adopted by other organizations with the hopes for raising money for the foundation.

The Riley Children’s Foundation supports cancer research at Riley Hospital for Children, and the foundation’s goal is to find new and creative ways to treat children with leukemia and brain tumors, according to the foundation’s website. The website said the nature of the dance marathon was created with the help of the slogan: “Dancing for those who can’t,” with dance simply meaning constant movement for the duration of the event.

Alexis Swearingen, business junior in the marketing and management concentrations and member of Alpha Phi, said she had the idea of bringing the dance marathon to IU Southeast because of her background in dance instruction. She said she felt a dance marathon was the perfect way for her sorority, as well as other sororities and fraternities, and to give back to the community in a fun and energetic way.

Swearingen said Alpha Phi asked the other IUS fraternities and sororities to cosponsor the Dance Marathon as an attempt to bring them all together under one cause.

“It was a good way to bring one philanthropy together as well as all the greeks,” Swearingen said. “We wanted to encourage students that were in other organizations to come out and participate.”

Carlie Mullin, psychology junior and member of Phi Sigma Sigma, attended the event with her sorority.

“It’s a great way for all the greeks to join in on one philanthropy,” Mullin said.

“I’m here to dance because they can’t,” said Brooks, referring to the children they were raising money for.

Brooks said the Pi Kappa Alpha members want to take opportunities to give back to the community, and they felt the dance marathon was a good opportunity to do that.

Aaron Lett, business junior and member of the College Republicans, attended the dance marathon as well.

“The children or Riley is a very important cause that we need to draw more attention to,” Lett said.

Swearingen said she and the other members of Alpha Phi hope the dance marathon will grow in the future and become an annual event at IU Southeast.