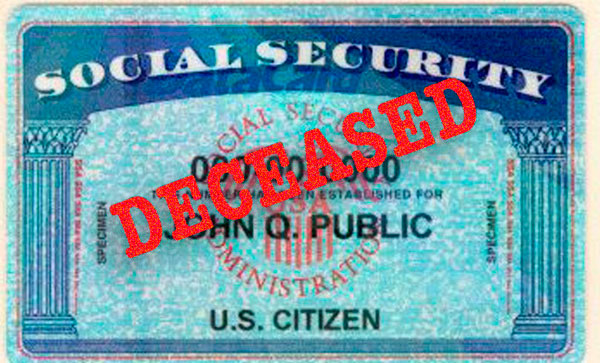 On New Year’s Eve of 2015, as drinks were being poured and laughs were being shared, I was busy being dead.

Thanks to a clerical error by the Social Security Administration, I was written off as legally deceased.

The worst part of this mix-up, aside from the nightmare of paperwork I would soon have to endure to prove I was indeed alive, was that the news was broken to me in a surprisingly impersonal, automated email sent from the financial aid website.

Being the personification of anxiety that I am, I made the decision to opt out of celebrations for the evening and instead rang in 2016 hunched over my laptop, researching every variation of phrasing in the email I had received.

Unbeknown to me, those first few hours of the new year would be symbolic of the first few months of my 2016.

I would ultimately spend them in and out of government agencies where my zombie status was greeted with confused expressions and furrowed brows.

I wasn’t able to simply stand before a desk and declare I was alive.

Instead, I was instructed to jump through a series of increasingly inconvenient hoops least I be ferried away on some “bring out your dead” cart.

Before heading into the belly of the beast, the unofficial name for my local branch of the social security office, I made the decision to be as prepared as I possibly could, as recommended to me in an article published by CNN.

The article brought to light that, in 2011, over 14,000 people nationally were wrongly declared dead by the Social Security Administration. Having read this, all I felt was anger, raw anger, at my misfortune.

Rather than making me feel better, the study only highlighted the fact that I was one of 14,000 people in a nation of 318 million unlucky enough to have the SSA label me as deceased.

As prepared as I could be, I faced the first hurdle of proving I was indeed a living, breathing person.

This hurdle involved me handing over a minimum of three forms of identification for observation.

I awkwardly leaned against the counter at the social security office as two employees and a manager politely asked me to recreate the facial expressions I provided in each form of ID I had handed over.

I was told this is protocol when attempting to prove you are you.

I obliged as identity theft is a very real thing.

Nonetheless, this information did not help me feel like any less of an ass as I stood before three, unamused employees for well over 20 minutes, smiling and frowning in hopes of proving I was in fact who I claimed to be.

The mockery that was me recreating those expressions proved to be an exercise in futility and I remained six feet under.

A week later, I received a series of phone calls that came to define my frustration with the SSA.

Not only were there issues with my financial aid, but the mishap on SSA’s end bled over into nearly every aspect of my adult life.

My cell phone provider seemed concerned I was trying to pull something as my social security number listed me as dead and the payroll department was unable to process any income for my name.

Further frustrated, I ventured back into the social security office and instead of awkwardly working my way through various smiles and frowns, I was told I needed a physical copy of my birth certificate.

Upon being told this, I realized I would have to drive two hours into Kentucky to retrieve a copy of said certificate.

I remember a boiling temperature that began in my ears and radiated to the entirety of my face.

At no point did I experience any feeling other than deep-rooted frustration.

My life had grounded to a halt due to a misplaced one and zero.

Finally, on a Wednesday like any other, I received a phone call from an apologetic-sounding woman.

With a soft tone, the woman explained she had been working on my ‘case’ for weeks now and was finally able to say she believed everything was taken care of.

I was as alive as I felt once more.

Forgetting to get her name, I expressed my gratitude to this mysterious person on the other end of the line and hung up feeling what I can now describe almost exclusively as joy.

No longer did I feel genuine hatred toward government agencies, a reaction I couldn’t help but harbor after trying to fix the debacle early on.

Instead, I felt grateful. Nothing more and nothing less.

I had risen from the dead just in time for Easter.