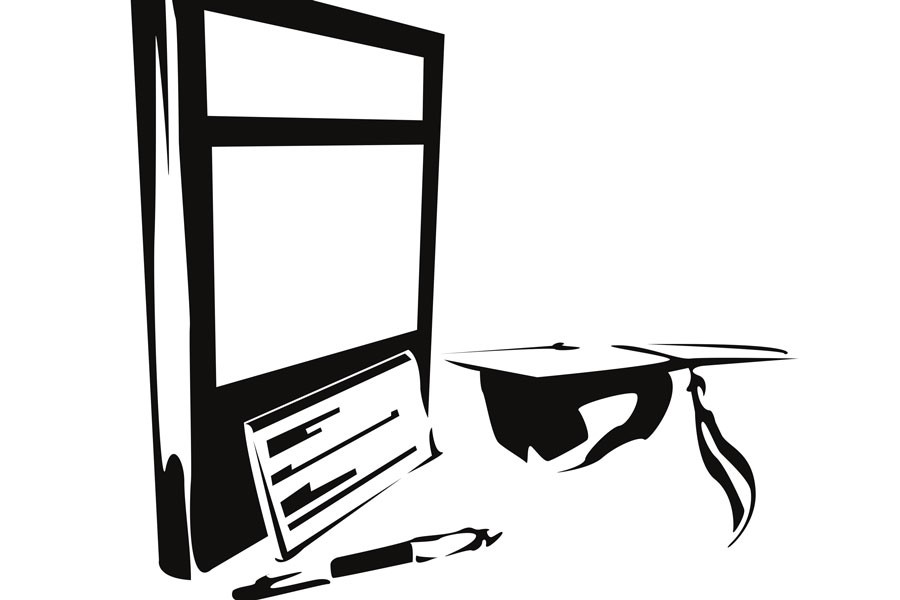 In the fall 2016 semester, IU Southeast is changing the way it calculates the cost of tuition for full-time students with the implementation of banded tuition. For some, it will be an opportunity. For others, it will be a financial inconvenience.
What is banded tuition?
IUS Vice Chancellor Dana Wavle described banded tuition, also sometimes referred to as “flat-rate” tuition, as a program where the tuition rate is the same from 12 to 18 credit hours. Students would still pay the normal per credit hour rate when taking one to 11 credit hours and would do the same for any hours above 18.

“The whole idea is we really want to incentivize students – to make it easier for students – to take more classes within that band and not have to pay more money for it,” Wavle said.

The banded rate will be applied to both on-campus and online classes. However, students enrolled in exclusively online degree programs will not be eligible for the banded tuition rate and, instead, will continue to pay by credit hour.

After the resolution had passed, Indiana University committed to implementing banded tuition policies at IUPUI and IU’s regional campuses by the start of the 2016-17 academic year. Its implementation this fall would put IU Southeast on track to meet this goal.

The resolution states it was adopted as part of an effort to increase the number of students who complete undergraduate degrees and do so in four years.

Wavle said the reason the rate was set to the 15 rate was to encourage students to persist toward this four-year graduation goal.

“Our goal is to get IUS students graduating faster than they are now,” Wallace said. “I would love to see all our students be able to graduate in four years.”

According to a report by Complete College America, over the last 20 years, 31 million American students have attended college and ultimately failed to receive a degree. Though several underlying causes factor into this, the one specifically targeted by banded tuition is that most full-time students simply fail to take the amount of credits necessary to graduate on time.

“We know statistically that the longer a student stays in higher education – taking five years, taking six years, and beyond – the harder it becomes for them to ultimately get a degree,” Wallace said. “So we want people to succeed.”

Per IU Southeast’s Bulletin, 120 credit hours is the minimum number of credit hours required for a student to graduate.

Research by Complete College America shows that only 50 percent of students nationwide are taking enough credits each semester to reach a 120 goal within four years and the percentage of students who complete a bachelor’s degree in four years is 19 percent.

Indiana University’s University Institutional Research and Reporting statistics show IU Southeast graduates a little less than this average at 14 percent in four years. That number expands to 28 percent in six years, and 35 percent in eight years.

Wallace said he recognizes IU Southeast is a school that attracts young, first-time college goers as well as older, nontraditional students who may be attending college for their third or fourth time. He said these differences in student body makeup have an effect on the graduation rate.

“When we talk about a target, I think that 35 percent and 40 percent would be a lovely [four-year] graduation rate,” Wallace said. “Given our population. Given our commuter status. Given where we are. I think that would be OK.”

The university’s Spring 2016 Census shows the average undergraduate student at IUS is enrolled in 10.83 credit hours. Without factoring in part-time and nondegree seeking students, the average rises to 13.67 credit hours.

At that rate, it would take a student at least nine semesters to reach the 120 credits required for a bachelor’s degree, assuming all credits taken apply to the student’s area of study. To satisfy the credit requirements in the eight semesters implied by the title of a “four-year” bachelor’s degree, students must aim for 15 credit hours a semester or take school year round with 12 in the fall and spring and six in the summer.

Wavle said that as a student begins to fall behind on his or her road to four-year graduation, the student’s chances of graduating decreases with each increase in the gap between where they are and where they should be.

“There are so many benefits to having a program that supports persistence and completion toward graduation,” Wavle said. “And the banded tuition is about as good as it gets.” The monetary costs for a student who fails to graduate in four years can be significant.

Aside from the cost of going to school for extra semesters, there also exists an opportunity cost for students as it delays them from earning a full-time, postgraduate wage. According to Time magazine, the median income for a 2014 college graduate during their first year in the workforce was $45,478.

According to the statistics from United States Census Bureau, the median income for a family in the United States is $53,657. The total falls to $49,446 for Indiana families and drops even lower for New Albany residents, where the median family income is $40,061.

When the monetary costs of staying in school longer are combined with the opportunity costs of wages lost by not entering the workforce, students are potentially putting a financial strain on themselves and their families by not graduating in the recommended four years.

An IUS student living at home is theoretically losing roughly $59,611 in school costs and lost wages each additional year he or she takes in pursuit of their degree.

How will banded tuition affect students?
Nick Thomas, sophomore political science, said he believes the switch to banded tuition would affect him and nontraditional students like him negatively. “It really will hurt a lot of the nontraditional students, people who don’t live on campus, and people who are working jobs outside of here,” Thomas said. “People who have to juggle lives outside of here are really going to get hit by it,”

Wavle acknowledged some students may face a difficult decision due to the new policy.

“We recognize it’s not a model that works for all students,” Wavle said. “Some students have life circumstances that are such that they’ll have to make a decision.”

Wavle said the university would want to work with students trying to move from 12 to 15 so that the student does not feel unfairly taxed by the new policy.

“We have to look at every situation individually,” said Wavle. “We recognize it’s not a one size fits all model.”

Wallace said it was important to remember that the university’s ultimate goal is to provide students with a degree in a cost-efficient manner and get them on to whatever their post-graduation goals are.

“More and more jobs out there require an entry-level bachelor’s. Our goal is to get as many of our students as possible ready for those jobs as quickly as they can manage it,” Wallace said. “Financially, it’s a smarter move to take 15. Does it work for everybody? No. But our goal is to see IUS students considered for those jobs more quickly than they are right now.”

Thomas said students already at 12 might struggle to handle an additional class.

“They’re either going to have to deal with the hike in price or take the 15 hours,” Thomas said. “[Going to 15] could lead to GPA shortfalls, and the student could suffer in the long run.”

Wavle said he doesn’t see the transition from 12 to 15 being a drastic one. “If you’re in, you’re all in,” he said. “You’re already in the mode of doing academic work, studying, doing whatever you need to do.”

“Neither is easy, but that’s part of the growth and development that occurs when you’re taking course work. You’re working toward the goal and persisting toward completion and graduation,” Wavle said. “And then when you get there it’s an extraordinary feeling of accomplishment.”

Wavle and Wallace both pointed to the university’s counselors as an excellent source for students having trouble with the transition.

“We’ve got a great group of advisers,” Wavle said. “These advisers know the academic curriculum, and they have a strong connection with the students in their school. They can really play an important role by working with the student, identifying specific needs, and helping them achieve their goals.”

Wavle said the counselors can also provide students with degree maps which lay out exactly which classes to take and when for a student to graduate within four years at 15 credit hours per semester.

Another initiative both spoke to was the creation of more and more online classes for students to utilize.

“A student who’s currently taking 12 hours could make their fifth class an online class,” Wavle said. “That way, they would not have to come to campus any more than they were at 12.”

Wallace again said a student’s goal should be to graduate with a degree as quickly as possible.

“Your goal is not to graduate here with a degree eventually as long as you’re not inconvenienced too much,” he said. “If that is your goal, OK, but we have the vast majority of students whose goal is to get that degree in a cost-effective manner.”

Wallace said with this being the goal for most students, banded tuition presents students with an opportunity to acquire a degree more quickly and at less financial cost.